Time to Be a Kid Again

Bluegills, brookies and blues: the boys of summer. 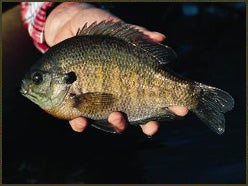 Near my home there’s a little two-acre backwater of the local river. My buddy Tim and I decided this was an ideal place for his daughters, Kim and Val, aged seven and nine, and my six-year-old nephew, Andrew, to go fishing for the first time. The water here was full of bream and pumpkinseeds. The kids were quick studies with baiting the hook. When Andrew’s bobber disappeared, he hauled back and threw a bluegill 10 feet behind him. With a little refinement, all three kids were soon deftly bringing sunfish to shore. That’s what summer is all about: Getting the family on the water. Discovering out-of-the-way brooks and farm ponds. Hitting the beach. And rediscovering the childlike joy of catching fish-any fish.

Can’t-Miss Fishing
Pick nearly any body of water anywhere in the Northeast, and you can be sure to find panfish-the calicoes (crappies), bluegills, perch and sunfish that swarm the shallows. To keep the kids active and happy, put bits of crawler, mealworms, yellow perch bellies or even dough balls a couple of feet below a bobber and toss it near a brush line or some shallow cover. With older kids who’ve got the wrist action, try fly-casting some popping bugs or cast a little Blue Fox spinner.

When that exploring urge strikes, take the family up into the mountains and fish the small streams for brookies. Check out waterways on the fringes of the famous mountain ranges, like the Tuscaroras near Lewistown and the Appalachians near Milton in Pennsylvania, the Green Mountains in Vermont outside of Manchester and the White Mountains in New Hampshire. Or venture to the Bethel area in Maine, New York’s Adirondacks at Corinth or Lake Placid, or the Alleghenies in West Virginia’s Monongahela National Forest near Elkins. All these mountain areas have good cold-water streams with active brookies. Drop a worm or a bushy fly behind a casting bubble, or a flashy spinner into the pocket water. These are all vacation areas, too, with plenty for you and the family to do when not fishing.

If an eager son or daughter wants tougher quarry, note that the largemouth fishing peaks about this time. Drop a pig-and-jig near cover or along weed lines in New Jersey’s Manasquan and Round Valley reservoirs and West Virginia’s Stonewall Jackson Lake. At daybreak and dark, splutter a buzzbait near cover on Pennsylvania’s Raystown, Wallenpaupack and Pymatuning lakes; Connecticut’s Bantam Lake and Lake Lillinonah; Rhode Island’s Flat River Reservoir; and Massachusetts’ Webster Lake and the kettle holes on Cape Cod.

Sea, Sand & Bait
If you vacation near the coast, be sure to take both medium-action spinning rods and your surf-casting gear. The crowds of rockfish anglers have diminished in the Chesapeake and Delaware bays with the northward migration of stripers. Still, weakfish, fluke, sea trout, croakers and numbers of big bluefish have taken the stripers’ place. Maybe take a trip to Maryland’s Ocean City and fish right off the Route 50 bridge or set up on the Shantytown Fishing Pier. Do the same in Delaware all along Fenwick Island from the state park to Bethany Beach and on north to the beaches at Rehoboth.

The farther north you go, the more you’ll find big stripers and bluefish. But with the kids along don’t ignore inshore areas and estuaries for snapper blues, flounder, mackerel, spot croakers and porgies.

In New Jersey, anywhere from Cape May through to Ocean City and on north to Barnegat Bay has abundant opportunities. The waters behind Long Island on Connecticut’s coast, in particular around Old Saybrook and Niantic, are very fertile, as is Rhode Island’s South Coast and Narragansett Bay on up into Massachusetts’ Cape Cod and its tidal ponds, particularly behind Nauset Beach in Pleasant Bay. And the craggy shorelines of New Hampshire, especially in Great Bay, and Maine, in Casco Bay and dozens of others, are full of fish.