One of these organisms is truly the stuff of nightmares, while the other isn’t as scary as it might look 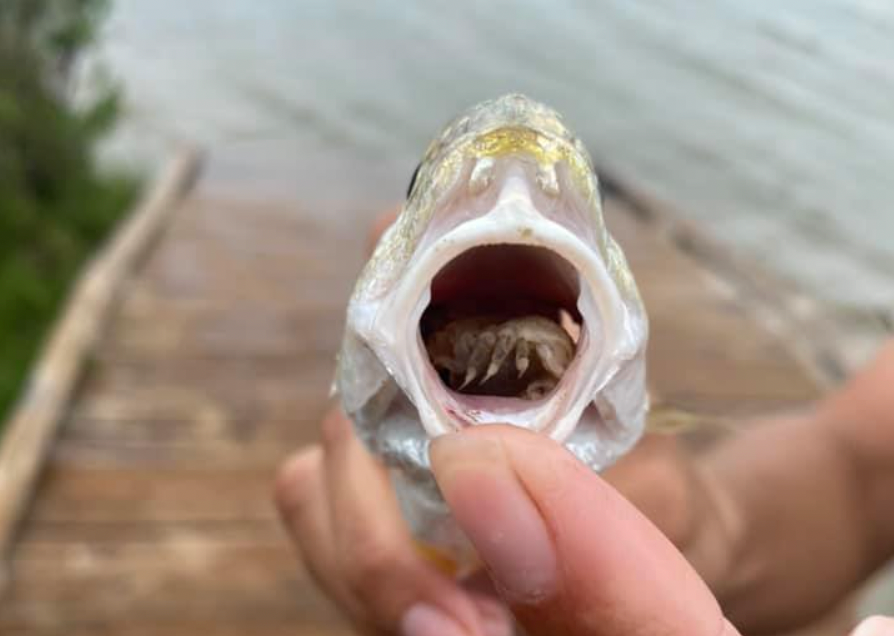 The tongue-eating parasite was found living in the mouth of an Atlantic croaker at a state park on the Texas Coast. Galveston Island State Park
SHARE

Last week’s discovery of a tongue-eating louse inside an Atlantic croaker caught at Galveston State Park is just one example of the creepy little critters that are hidden from plain view in Texas waterways.

The photo of the louse, which is classified as a parasitic isopod and a cousin of the pillbug or “roly poly,” is fascinating in a science-fiction sort of way. So is the life-cycle of this strange creature, which usually enters a fish’s mouth through its gills and then kills the tongue tissue of the living fish by sucking its blood. The louse then latches on and replaces the tongue entirely, serving as a bizarre sort of prosthetic for the fish and earning free meals in the process by feeding on the fish’s mucus.

Revolting? Certainly. Deadly? Not really. Like many parasites, the tongue-eating louse, also known as a “snapper-choking isopod,” does not actually kill its host, but rather grows inside of the fish as part of a totally one-sided relationship. It’s a give-and-take problem: The host has no option but to continue hosting the parasite, while the parasite takes just enough for itself to keep them both alive.

Luckily for us, this particular parasite does not affect humans. Other reports coming out of Texas in recent years, however, have revealed another parasitic organism living in the state’s waterways that is truly terrifying. It’s called a brain-eating amoeba, and yes, it’s just as scary as it sounds.

Last month, for the third year in a row, a child in Texas died as a result of an infection caused by the parasitic amoeba after playing at a public splash pad in Arlington, Texas. The single-celled organism, formally known as Naegleria fowleri, also made national headlines in September 2019, when a 10-year old girl died after swimming in the Brazos River and Lake Whitney near Waco, Texas. And in 2020, another child—this time a 6-year old boy—died from an infection caused by the brain-eating amoeba after playing in a splash fountain near his home in Lake Jackson, Texas. Soon after the boy’s death, Texas Gov. Greg Abbott issued a disaster declaration when the amoeba was found in the City of Lake Jackson’s water supply.

The scientific name for this infection is Primary Amebic Meningoencephalitis and, according to the Center for Disease Control, it is extremely lethal. Of the 151 individuals who were infected in the United States between 1962 and 2020, only four survived. The good news is, however, that it’s extremely rare.

“The amoeba is commonly found in warm freshwater, and usually infects people when contaminated water enters the body through the nose,” reads the CDC’s website. “Once the amoeba enters the nose, it travels to the brain where it causes PAM, which is usually fatal.”

The parasitic amoeba’s proclivity for warm freshwater helps explain why these three fatalities occurred in Texas during September, when the state’s waterways are typically at their warmest after heating up all summer long. Likewise, the simple fact that children under 12 aren’t usually the best swimmers (and, consequently, tend to take water up the nose) helps explain why children are more prone to infection.

Of course, Texas waterways are home to plenty of other creepy critters—from stingrays and cottonmouths to bull sharks, alligators, and Portuguese men-of-war. But there’s something about the “tongue-eating” and “brain-eating” behavior that make some of the less visible creatures inhabiting these waters the stuff of nightmares.