Last week, I posted about how you can use weed-whacker line to increase the weight of your arrow. Even though... 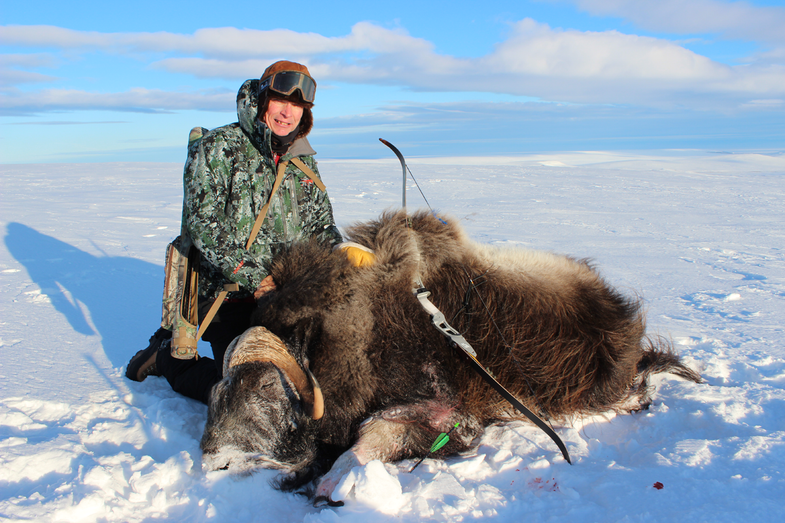 Last week, I posted about how you can use weed-whacker line to increase the weight of your arrow. Even though it’s slower, a heavier arrow penetrates more deeply than a lighter, faster arrow. People talk about kinetic energy in an arrow, but I think the topic is widely misunderstood. Energy transferred to the animal isn’t what kills; it’s the momentum of the arrow pushing it through that does the work.

A heavier arrow will penetrate better, but the broadhead you choose also plays a huge factor in your arrow’s performance. On the muskox hunt that I just returned from, the three hunters with tags used three different setups: a straight carbon arrow (around 450 grains) with an expandable broadhead, the aforementioned carbon arrow weighted with weed-whacker line and tipped with same expandable broadhead (both shot out of 70-pound compounds). Finally, there were my dad’s arrows, Easton FMJs tipped with Grizzly single-bevel two-blade broadheads (about 575 grains total) which he was shooting from his 50-pound recurve.

All three arrow setups worked sufficiently and achieved enough penetration to get the job done quickly. However, there wasn’t much comparison in penetration between the mechanical and the fixed broadhead. There was about 15 yards difference in shot range, but all were vital shots in the heart/lung area of mature muskox bulls. The lightest arrow got about 12 inches of penetration, the heaviest achieved about 15, neither striking any major bones, and both pulling large clumps of hair into the wound. My dad’s single-bevel setup split the entire scapula, top to bottom, and knocked a big chunk out of the far shoulder, just cutting through the skin and getting around 22 inches of penetration. Upon recovery, it was still shaving sharp.

While I personally don’t see the merit of using a mechanical point, this isn’t intended to bash them. If they are legal in your area, and you want to use them, that’s your choice. I just think there are better options. They work great on smaller, thinner-skinned game like deer, and they worked just fine on those shots on muskox. But I also think that shot angle and placement is much more critical with those types of points. I’ve heard lots of mixed reviews of terminal performance with different mechanical points, ranging from great to horrendous.

Knowing that there’s often less margin for error with archery gear than with a rifle, wouldn’t we want to use a broadhead that is deadly under the widest variety of shots? It took a lot of research for Dr. Ed Ashby to come to his conclusion that a single-bevel two-blade broadhead was the best penetrating design, and it’s nothing to scoff at. Single bevels (when matched directionally with helical fletching) cut in the direction that the arrow is already spinning. Both blacktail deer I’ve shot in the shoulders (one broadside and one quartering to) resulted in split scapulas. Although I do like the single bevels, it’s hard to say that the classic double-bevel points won’t do the same thing. I know guys who have split moose shoulders with longbows and recurves in the 50-55-pound range slinging Zwickeys.

From what experience I have, I am sold that a well built, cut-on-contact two-blade broadhead with a long, gradual angle of attack is hard or impossible to beat for penetration, if all the other variables are equal. There are lots of great three-blade broadheads out there that will work just fine, but in my experience, they don’t achieve the same effect.

Despite popular practice—and maybe popular opinion—you can get two-bladers to shoot very well out of a compound if you use helical fletching. That will prevent wind planing, and helical fletching is just more accurate, so use it.

You may look like a dork, but who cares? I once was told by a friend who said the Grizzly broadheads I use are the stupidest-looking thing ever made, or something to that effect. That may be true, but the proof is in the pudding, and I know that if my shot is off by a few inches and hits a shoulder blade, it’s not going to matter. I didn’t have a tag on this trip, but what I saw only reinforced my opinion on the subject.

So if you’re stricken with the off-season blues, or even if you aren’t, give some two-blade points a try. Get them flying well, razor sharp, and I don’t think you’ll be disappointed with the results.