The Bowhunting Pioneers Were Right: Helical Fletching Is Most Accurate

All of us have our favorite gear choices, but most ethical bowhunters would agree that when it comes to selecting... 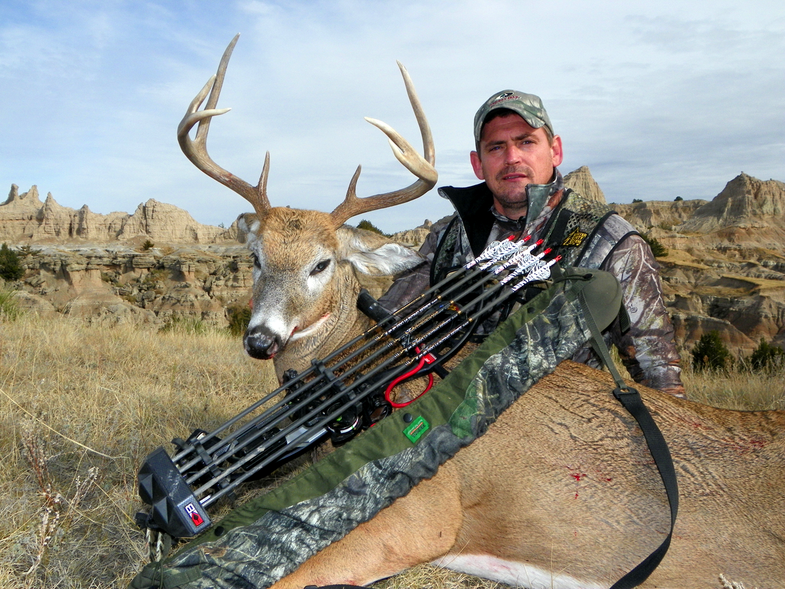 All of us have our favorite gear choices, but most ethical bowhunters would agree that when it comes to selecting our bows and arrows, our common goal is consistent in-the-field accuracy. We want our arrows to hit where we’re aiming. Which is why many of you might be surprised to learn an alarming fact: If you’re buying pre-made arrows, you’re likely not experiencing the best-possible accuracy with your broadheads.

Where do most mass-produced, pre-made hunting arrows struggle? Most fail to offer a true “helical” fletch with today’s shorter, stiffer, two- to three-inch modern vanes. And why is this important? As its name implies, helical fletching spirals around the arrow shaft, so when the arrow is shot, the helical orientation helps the arrow spin in flight, sort of the same concept as rifling in a barrel. The spinning allows the arrow to better stabilize while in flight, resulting in increased downrange accuracy.

Most production arrows feature vanes attached in a straight, or “offset” orientation, which can cause accuracy problems because these options fail to stabilize broadhead-tipped arrows effectively. And in worst-case scenarios, this type of fletching attachment also can lead to nasty situations such as “wind planing” wherein the fletching, or broadhead, might take turns “steering” the arrow. The result can be wild inaccuracy.

As a longtime bowhunter and dedicated arrow builder I’ve known about the benefits of helical fletching for years, but was recently clued into the intricacies of modern helical fletching by Rick Mowery, 49, current communications and marketing manager for the Pope and Young Club. Mowery’s past also includes a long stint working for arrow-building-supply-specialist Bohning Archery, which more than a decade ago introduced the ground-breaking 2-inch Blazer vane, a product that spear-headed the movement to modern, shorter hunting vanes. At Bohning Mowery was able to perform a bunch of eye-opening tests, and form some strong opinions on fletching design.

Testing Proves Helical Reigns Supreme
“If you’re shooting a broadhead in a hunting situation, my personal opinion is a helically fletched arrow is much more accurate, and not by just a little bit—by a lot,” Mowery said. “The type of vane you use is not as important as how it is fletched to the shaft. I’ve tested everything from straight to offset to 2 to 5 degrees of helical, and the most accurate arrow flight that I could get was using vanes fletched with a 3-degree helical. And this was after months of testing, and thousands of shots.”

Interestingly, Mowery found that increasing the helical to 5 degrees was “overkill,” resulting in arrows slowing down and dropping much sooner at longer yardages. Another eye-opener? The seemingly “middle ground” 3-degree helical shot even flatter than straight or offset vanes, even out to extended yardages, 60 and beyond.
Mowery said most bowhunters who shoot 20 to 30 yards might never really notice the benefits of helical fletching, but once you start shooting 40, 50, or 60 yards or more, the difference can be staggering.

“Being involved with bringing the Blazer vane to the market, and developing a few of Bohnings’ fletching jigs, I have found that the most-accurate arrows, whether shot at 20, 40, 60, or even 80 yards, were the helical- fletched arrows. That being said, it doesn’t matter which vanes you use; there are a lot of good models being made by AAE, Pine Ridge, VaneTec, and more. If you fletch them helical, they will out-perform offset or straight-fletched arrows every time. It’s like throwing a perfect spiral in football—like a bullet traveling through barrel rifling.”

Mowery knows that production arrows struggle because of his discussions with mass-producing arrow builders who have told him the helical process is too difficult.

“It’s not a condemnation of the arrow manufacturers; they have to use a process where they have to fletch a large quantity of arrows in a short amount of time,” Mowery said. “What they told us in the past, they could not do helical because it slowed down the process to the point where financially, it made no sense. It would be great if technology increases to make that possible, and it will probably be doable in the future, but I haven’t heard that we’re there yet.”

How to Get the Good Stuff
Mowery said the best options for those looking for true helical fletching is to purchase arrows from an archery pro shop that fletches its arrows by hand (be sure to ask for helical), or to do it yourself. Mowery’s favorite jig for fletching modern vanes is the Bohning Tower Jig, which offers the built-in 3-degree helical Mowery said his testing found was optimum. And there is also a third option: Bohning also sells something called the Stretch Fletch—more or less a one-piece “cartridge” of three vanes that simply slips onto the back end of your arrow and locks in place with a dab of glue. Even if you have three thumbs, installation is a snap. The Stretch Fletch incorporates 2-inch Bohning Blazer vanes that feature, what else — a 3-degree helical orientation.

Of course using helical fletching is not a new or novel idea; many decades ago, Archery Hall of Famer Norb Mullaney, one of the world’s top authorities on the design and performance of bows and archery equipment, wrote that compound-toting bowhunters would achieve the best broadhead accuracy with helical-fletched arrows and 4- to 5-inch fletching.

And of course, helical fletching was first made popular by the traditional folks, longbow- and recurve-toting archers who were attempting to stabilize their wooden arrows that were tipped with large, heavy, “traditional” broadheads. The answer back then was long (5- to 5-plus-inch) helical feather fletching—which, by the way, is still the best answer for traditional setups today.

Even for the most modern, high-tech archers, the answer to the best arrow flight continues to be helical fletching, and it’s a point that is not lost on Mowery.

“Archery has been around a long time, and at the end of the day, the pioneers had it right,” he said. “It’s just one more example of modern archers utilizing the knowledge of those from the past, and when you do that, you’re going to be better off because they knew what they were doing. You’ve got to embrace the future, but honor the past.”