If your turkey season isn’t over, it’s probably winding down to the last precious weeks. And, if you haven’t punched... 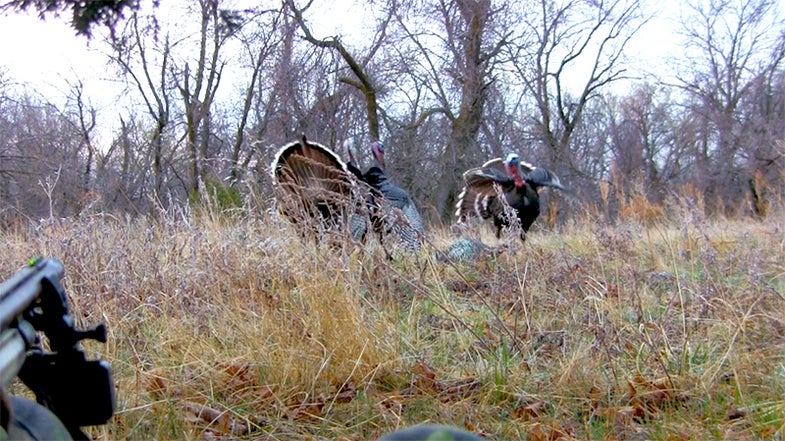 If your turkey season isn’t over, it’s probably winding down to the last precious weeks. And, if you haven’t punched your tag yet, you might be willing to take desperate measures. If you’re hunting with a buddy or two and you’ve exhausted your calls on a hung-up gobbler, try simulating a big turkey fight between multiple birds. It can work on henned-up longbeards, but it’s probably most useful on a flock of curious jakes. I tried this with some hunting partners in South Dakota two weeks ago, and witnessed the most effective bit of jake calling I’d ever seen.

Here’s how it worked.

Ken Byers, Justin Leesman from Alps Outdoorz, and I spotted a flock of jakes across a river strutting for a few hens in a cow pasture. There was no way to cross the river, so we hunkered down in the tall grass on our side and Byers had us lay out our calls. Leesman and I pulled out friction calls and Byers had a diaphragm call and box call.

We were going to coax these birds away from their hens and over the river? Yeah, right.

Despite my skepticism, we all gave our best and loudest fighting purrs. We went on for probably three full minutes and Byers thew in some cuts and puts along the way. It sounded awful, and hardly resembled the fighting purrs real turkeys make.

We finally stopped calling and everything went quiet. We waited about two minutes and then one of the jakes gobbled hard in our direction. He was much closer. Then, to my amazement, a jake pitched up and over the river and landed about 75 yards away from us, followed by four of his pals.

A few minutes later the little flock was right on us and Leesman killed one at 15 yards.

You can make fighting purrs with a slate call, a diaphragm call, or two push button calls—one in each hand. But the key for the gang-fight tactic is to have multiple people calling at the same time. Each call sounds like a different bird and it’s louder and more chaotic than one guy calling by himself. Rustle the leaves, snap a couple small twigs to add some realism. But, keep in mind that it doesn’t matter too much what the calling actually sounds good, just as long as it’s emphatic.

You can’t rationalize what’s going through a turkey’s head when he’s coming to a call. But, Byers explained the tactic simply: “Nobody can pass up checking out a good fight.”

If you’re not familiar with fighting purrs, here’s a quick video I shot with Rick White of Hunter’s Specialties a few years ago in Oklahoma: