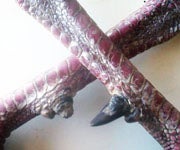 Ohio hunters killed more than 17,000 bearded turkeys during the state’s four-week spring season. One hunter, Josh Grossenbacher of Zink Calls, took a special longbeard during the final week of the season — the bird had two spurs on each leg.

The usual biological rules for spurs include the following lengths: less than 1/2 inch (rounded; jake); 1/2 to 1 inch (blunt; 1 to 2 years old); 1 to 1 1/4 inches (pointed; 2 to 3 years old); and over 1 1/4 inches and sharp, we’re talking older than 3 years. Spurs aren’t always matching either, as you Strut Zoners know. Some wear down and break, etc. Grossenbacher’s longbeard has three spurs that are blunt while another reflects a respectable two-year-old adult gobbler.

So how rare are double-spurred gobblers? “Two spurs on each leg are rare — fewer than two dozen cases are known,” wrote Lovett E. Williams, Jr., renowned wild turkey biologist, in his book “After the Hunt.”

You’d have to think maybe some go unreported and maybe some are never killed by hunters. Likely others have been shot since Williams wrote this — the book was published in 1996.

Have any of you ever taken a gobbler with no spurs or other “nontypical” versions?