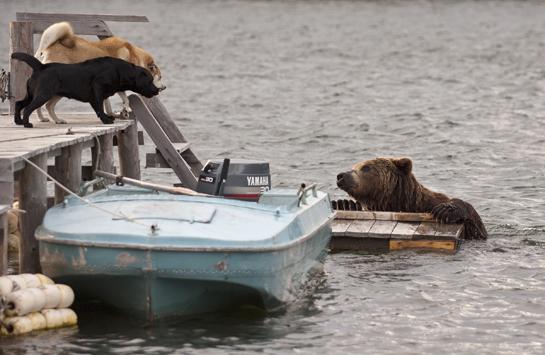 The bear swam across Kurile Lake to check out a fishing boat for food. When the owner of the boat saw the bear pulling up to the dock, he cut loose two of the camp guard dogs, a labrador and an akita.

The two dogs kept the bear at bay and eventually scared it off.

Gorskov, from Moscow, told the Daily Mail: “This fishing camp is brown bear territory and and dogs live there in the summer to guard territory. Bears like to investigate the boats. They used to be made from rubber but that was changed after bears would pop them with their razor sharp claws … The bears are the boss here and there is constant conflict with the guard dogs.”

This isn’t Gorskov’s first time photographing big Russian brown bears. He’s made a career of photographing big bruins and he spent six years following bears to capture shots of them in their natural environment.

In some instances, Gorskov even got in the water and swam with bears to get photographs.

“Photographing bears is risky,” he told the Telegraph. “I have got as close to the bears in the wild as you could in the zoo. It is only now, looking back, that I realize how dangerous it was. Bears have caused more injuries to photographers than lions, tigers, leopards and sharks combined.”

To see photos of some of the biggest brown bears ever killed in Russia see: SCI Record from Asia.