Later this month Berkley will start shipping out NanoFil, its latest fishing line designed specifically for light and medium spinning... 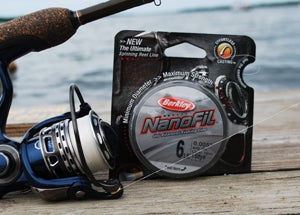 Later this month Berkley will start shipping out NanoFil, its latest fishing line designed specifically for light and medium spinning tackle. NanoFil is a monofilament/braid hybrid that runs in extra small diameters. It’s made of Dyneema (a gel-spun polyethylene), which is the same sort of material that’s commonly used in bullet proof vests, windsails and Berkley’s other superline – Fireline.

The difference between NanoFil and Fireline is that NanoFil consists of hundreds of Dyneema filaments that are molecularly bonded together, not fused together by heat like Fireline. The idea behind NanoFil was to create a line that has the strength and no-stretch, no-memory properties of a braid while retaining the smoothness of mono.

I got to fish with NanoFil last week, and while I doubt the angling industry will be turned on its head with the release of this new product, I have to admit it worked incredibly well for the conditions I was fishing in: clear, shallow water that called for long, accurate casts to bedded bass.

But there’s no such thing as a perfect fishing line, you have to match your line to your quarry and water. With that in mind, here are the upsides and downsides of Berkley NanoFil.

– The line doesn’t stretch, so it’s super sensitive. I could easily feel and see the line twitch as bass mouthed my plastic worm.

– A high strength/diameter ratio allows you to use lighter baits and cast them farther. Don’t be surprised if this line becomes a favorite for panfish anglers.

Downsides
– The extra small diameter in the lighter pound tests make the line difficult to see and tie. The 1 lb. test has about the same diameter as human hair. In fact, under a microscope it’s almost impossible for the untrained eye to tell the difference between the two.

– Because the line is smooth and has a thin diameter, knot strength is an issue. Knots won’t break, but they will slip. There are only two knots you can really tie with this line: the Nanofil Knot, also known as the Double Palomar, and the Double Albright, see the photo below. Don’t even consider trying a clinch knot.

– NanoFil is extra strong, but since it doesn’t stretch it will break under shock, like when you decide to rear back and set the hook on a bowling ball of a bass. An easy solution to this is using a flexible rod and backing down your drag a little.