Brook trout records in New York State have been hard to hold onto in recent years as the species continues... 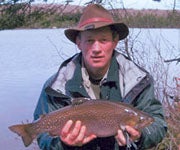 Brook trout records in New York State have been hard to hold onto in recent years as the species continues to thrive.

On May 5, William Altman broke the state trout record for the seventh time in eight years with his 5-pound, 14-ounce brook trout, caught in the West Canada Wilderness Area in Hamilton County.

The state Department of Environmental Conservation described the details of the catch in their press release on Syracuse.com: “Altman’s record-breaking fish was stocked as a fingerling by DEC’s Rome Fish Hatchery and is considered a Temiscamie hybrid, a cross between a domestic brook trout and a wild Temiscamie (Canadian-strain) brook trout. These hybrids are stocked because they have a better survival rate than other strains of brook trout in some of the more acidic waters of the Adirondacks.”

The DEC is the authority that verifies potential brook trout records, including Altman’s, as a part of their Angler Achievement Awards Program. The Awards Program is broken down into the Catch & Release, Annual Award and State Record Categories.

While the DEC oversees all freshwater fish submissions, they specifically ensure that brook trout submissions do not come from ineligible waters. This excludes brood stock, which are adult stocked breeding fish, and splake, who breed very rarely, from being submitted.

If you plan on submitting a record breaker of your own, make sure you double check the type of waters you are fishing and check out the DEC submission form and official rules.