Photos by Daymond Gardner Abbie Eubanks was in trouble and she knew it. More than 180 feet below the surface... 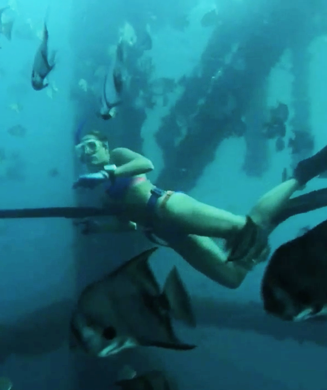 Abbie Eubanks was in trouble and she knew it. More than 180 feet below the surface in the Gulf of Mexico, using a giant oil-rig support leg for camouflage, she had just “stoned” a huge amberjack with her speargun. In a celebratory mood, Eubanks was taking her time heading for the surface when the 130-pound fish came back to life and was hellbent for bottom. Tethered to this runaway freight train, Eubanks reached 220 feet before she even realized what was happening. “I was way too deep,” says Eubanks. “I became totally narced out.” (Nitrogen narcosis is similar to being intoxicated. The diver becomes numb and can’t think straight.) “It was strange. I was totally high and remember having a conversation with myself in the third person. I kept saying, ‘Abbie, this is too deep.'”

There aren’t many moments in hunting or fishing when you get to look a critter in the eyes from just a couple of feet away before you kill it. It’s not scared of you. In fact, the opposite should be true: You should be afraid, very afraid. When you’re spearfishing, the beasts of the ocean have all the advantages. You simply have to have the moxie to step into the ring. Eubanks is all moxie. At 27 years old, the Louisiana badass’ proficiency with a speargun is as keen as her piercing brown eyes and Cheshire grin.

Starting the Fire
While most little girls her age were playing with Barbies, Abbie was bobbing around in an offshore boat near the Louisiana coast, learning the basics of shooting fish.

“My parents started taking me offshore when I was around 7 or 8, and they would spearfish while I watched,” the Baton Rouge native says. “Once I turned 10 or 11, I started snorkeling above them, watching them hunt, and every now and then I’d shoot small fish on the surface. When I turned 12, they let me dive with them, breathing through their octopus, sharing air. That introduced me to a whole new world. Being under the water experiencing the thrill of spearfishing with my mom and dad started a fire inside me that burns like crazy.”

She has since earned many accolades, including four state records with the Louisiana Council of Underwater Dive Clubs in the women’s division–one for a 110-pound amberjack and another for a 35 ½-pound barracuda.

Understanding the Game
If you’ve never spearfished, the concept sounds quite simple. The actual act, however, is anything but.

“You can fish with scuba gear or free dive, where you simply use a mask, weight belt, and flippers while holding your breath. I do both but prefer free diving because you don’t have to jack with all the scuba gear,” Abbie explains.

Her free dives usually last about 60 seconds and she can descend to 60 feet.

“I can hold my breath for about 3 minutes, but when you’re kicking down and up, your body uses up a lot of that oxygen, so I can only stay under for a minute or so.”

This leaves very little time to identify a target, stalk and shoot it, and fight it to the surface. “You have a reel attached to your gun, so once you shoot, it free-spools line while you swim back to the surface. You want to keep some tension on the fish and fight it as you ascend, otherwise it could wrap around a rig leg or get snagged under rocks. When that happens, you have to put on the scuba gear and go get it, which really sucks!” she says.

The Danger Beneath
Unlike traditional fishing and hunting, spearfishing has fundamental dangers that can be catastrophic.

“One of the most common problems is getting your line wrapped around your foot after you shoot a big fish. If this happens when you are free diving, you have precious little time to react and cut the rope before you are dragged down,” she says. “So always keep a knife attached to your calf.

“Even worse are shallow-water blackouts. They are less common but scary as hell. They can happen as you surface from a free dive. When divers drown, it’s usually because they blacked out.”

Then there are those huge fish that come back to life and threaten to end yours, like the amberjack that was towing Eubanks to the depths of the Gulf.

“I knew I had to cut that jack off,” she says. “Thankfully, I finally listened to myself!”

But the situation remained dire.

“Once I cut the fish off, I started for the surface. But when I breathed, I hyperventilated and sucked in water. I was at 190 feet. I looked at my air gauge and knew I had plenty, but the water kept coming in. Everything started turning white. I remember thinking that I was going to die. Then I thought, Screw this! I refuse to freakin’ die like this! So, I fought it. I fought it with everything within me.”

All at once, she regained her vision, was able to control her breathing, and made it to 60 feet, where the narcosis began to fade.

“I went straight to the surface because I thought my gear might have been jacked up. Once I realized everything was fine, I went back down to 30 feet to decompress. It really freaked me out, though.”

The Lesson Learned
The 130-pound amberjack won that day, but it taught Abbie a valuable lesson.

“I screwed up. I should have immediately started swimming toward the surface when I shot that fish. And I lost my cool. The number one thing to remember is to not panic–and I panicked.

“Just as soon as we could go, I wanted to get back in the saddle. So we went out to the same rig the following year and I dove to 110 feet. Another monster amberjack gave me a shot, and I stoned it. However, I didn’t celebrate. Instead, I swam as quickly as I could to one of the rig legs. About the time I got there, it came back to life just like the last one had done. I grabbed the rig leg and held on–it nearly ripped my arm off trying to pull me down!” she says.

Eventually, she brought the fish to the surface. The 110-pounder broke the women’s world record at the time.

The Undiscovered Universe
Asked why she spearfishes, Abbie takes a moment to reflect before responding.

“On a recent dive, we set up on a rig hoping to find some cobia. Once we slid in, we realized that the water was a little off-color and there was a significant murk layer about 50 feet down,” Abbie explains.

“Beneath that layer of murk was the most brilliant blue water you could imagine. Perfectly clear. And in that blue water were swarms of huge cobia, and sharks, and fish of all sorts.