When temperatures rise, your catch needs a little more care before it goes back in the water 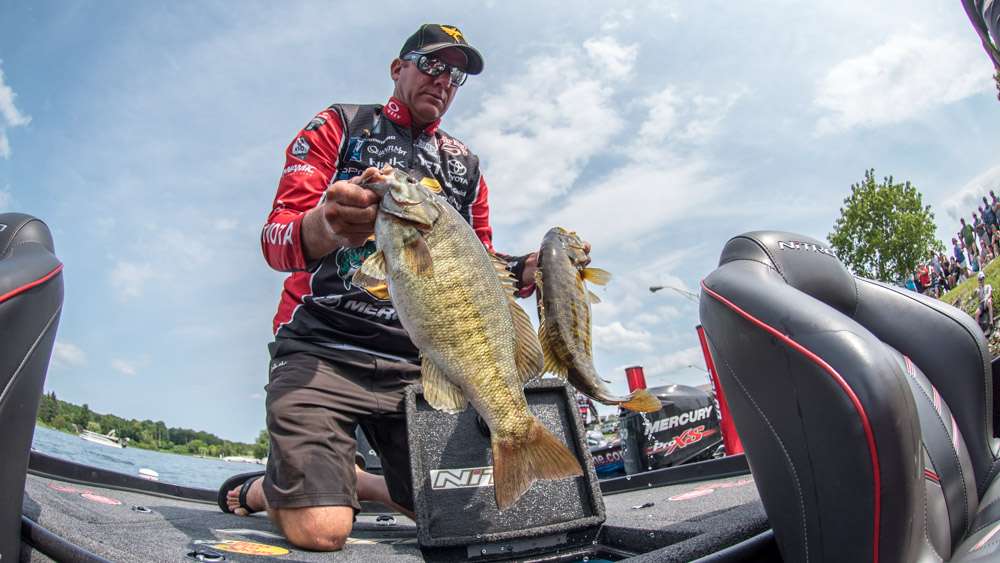 Late summer brings with it heat and humidity. As anglers, most of us fish early in the morning and later in evenings to avoid these brutal conditions. We stay indoors or in the shade if possible. But some of us will fish during the hottest parts of the day. Sitting in the sun for hours on end will wear on you. Well, higher water temperatures wear on fish as well. Some species, such as trout and musky, feel the effects of the heat more than others, and shouldn’t be targeted when waters reach higher temperatures. Bass are a little more hearty, but catch-and-release fishermen do need to exercise more caution during these hot months. Here are a few things you can do that will help the fish in your lake remain healthy.

How to Properly Measure and Handle Bass

If you catch a big bass, it’s likely you will want to measure it—I have to do this a lot while fishing kayak tournaments. Many of the certified measuring devices are made of different metals. Metal, when it sits in the sun, can become as hot as a cast-iron skillet cooking over a roaring campfire. You wouldn’t purposely touch it because it would burn your hand. So instead of frying your fish on a measuring board, take the board and dunk it under water first. You can also try storing it in a place where it isn’t exposed to direct sunlight.

For tournament anglers using livewells, ensure you have adequate oxygen levels in them by running the aerator frequently, which will help your fish survive. There are also livewell additives that help boost O2 levels and fish weights that help stabilize fish.

When handling fish, try to limit their air exposure by keeping them in a landing net in the water until you’re ready to take a quick photo. Keeping them in the water will help them stay less stressed and increase the chances of survival after release. Try and release your fish as quickly as possible.

Should You Fizz Fish?

When lakes and rivers reach bathwater temperatures, fish begin to transition to their summer haunts in search of cooler, more comfortable water. This means fish are going into deeper holes, main river ledges, basins, and so on. When bass—as well as crappie, musky, pike, perch, and other species with a pneumatic duct that connects to their swim bladder—reach depths exceeding 28 feet, they are susceptible to barotrauma.

Barotrauma is a condition that occurs when fish are hooked in deep water and brought to the surface, causing the swim bladder to expand. Humans can also be affected by this condition when scuba diving and rising to the surface too rapidly (it’s known as the bends).

It’s a controversial practice, but I personally believe the best way to ensure fish survival is by fizzing them. Most state agencies will not advocate for fizzing, because you have to really know what you are doing in order for the fish to survive. But every pro tournament angler I know believes in fizzing the fish they catch in deep water.

Fizzing a fish consists of using a sterilized 1½-inch needle and inserting it into the side of the fish, a half-inch behind the pectoral fin. The reason it’s controversial is you must be really precise when inserting the needle. If you miss the bladder, it can injure vital organs and kill the fish. Also, dirty needles can potentially cause infections, so you must keep them clean.

If you’re not comfortable fizzing a fish or simply don’t know how, keep the fish in the net, take the hook out in the water, and release the fish, because it will most likely swim back to the bottom and live. Also, you can simply fish shallow water and avoid this situation in the first place. When it’s hot, fish will seek shaded waters near a bank, under lily pads, or moving water in small creeks and rivers are locations. Catch a fish in one of these spots, and you don’t have to worry about water depth and barotrauma affecting its survival.

There are no sure-fire methods that guarantee fish survival, but these tips will help decrease mortality. There’s plenty of fun to be had and fish to be caught this summer. Hit the water, but also consider the health of the fish you’re catching, and educate others when you have the opportunity.