How to Catch Smallmouth Bass in Moving Water 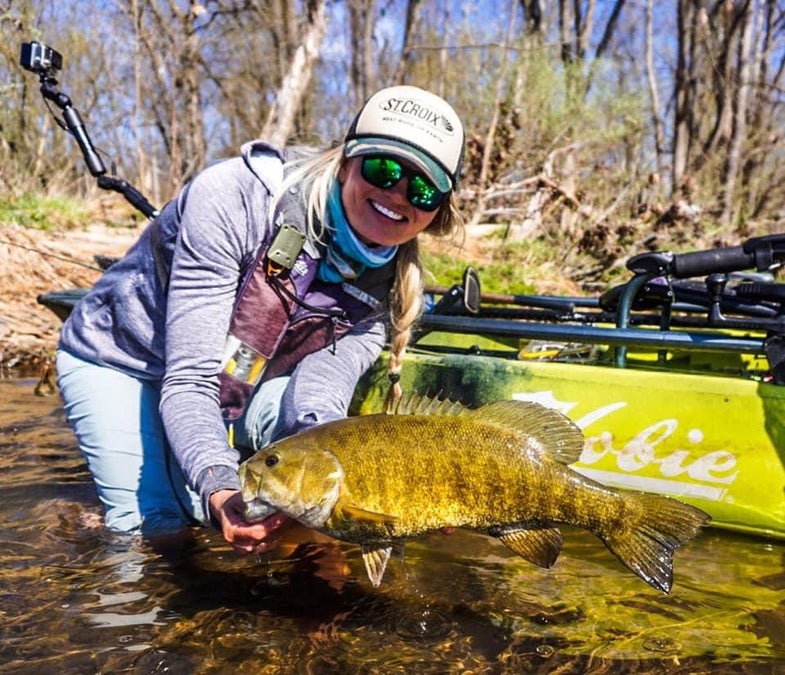 Catching smallmouths in the river is slightly different than targeting them in lakes. Kristine Fischer
SHARE

Smallmouth bass have become one of the most popular game fish to target in North America. They are aggressive by nature, and their fight is stout enough to hook any angler for life. Luckily, they are abundant in lakes and rivers in almost all 50 states.

We often hear about the iconic Great Lakes smallmouth fishing, Mille Lacs, Champlain, and Dale Hollow, home of the world–record smallmouth. But with fish as big as 8 pounds being pulled out of locations like the Tennessee River the last few years, anglers are paying closer attention to moving water for better smallmouth fishing.

Catching traditional lake smallmouth is slightly different than river smallmouth. You can’t target them the same, namely because rivers have current, and lakes do not. Here’s how to catch more smallmouths in moving water.

Cast Your Bait into the Current

When targeting smallmouth on rivers, current is going to play a major role in how and where they set up and feed. When you’re breaking down a large lake, you often make note of areas fish stage and set up on, depending on the time of year. Fish almost always gravitate to structure on lakes: boulders, grass, wood, etc.

When you’re dealing with a river, fish stick to the current. Sometimes that current is caused by structure, but not always. River fish utilize areas they can hang out in without expending too much energy, like eddies.

Eddies are sections of the river that move upstream. They are created when there is an obstruction in the main current, and water backfills the area behind the obstacle. Fish will set up in these areas and allow the current to continue to bring subsistence their way. The most effective way to fish these locales is by casting your bait upstream and working it back naturally with the current.

Current breaks, channel swings, ledges or rapids are other areas where smallmouth bass can be found on rivers. Basically anywhere the current is being slowed down is a place you can catch smallmouths.

When picking a bait, time of year, water temperatures, and weather play a larger factor than the location you are fishing.

Smallmouth tackle selection is going to look very similar for both lake and river fish. If the bite is fickle, ned rigs, small finesse jigs, light shaky heads, and flukes can be very productive. You can also fish wacky rigs and drop shots in moving water depending on the flow. You just may have to adjust your drop shot weight accordingly.

If the stars align and the bite is on, both lake and river smallmouth love top water poppers, wake baits, ploppers, walking baits as well as spinner baits, swimbaits, and chatterbaits.

Whether you’re a lake dweller or river rat, you can take your knowledge of these fish and apply it in any scenario. I would encourage those anglers who haven’t spent much time on rivers to hop in a kayak or jet boat and try their hand at it. Not only are the rivers typically less pressured, but in my experience these river fish put up more of a fight.