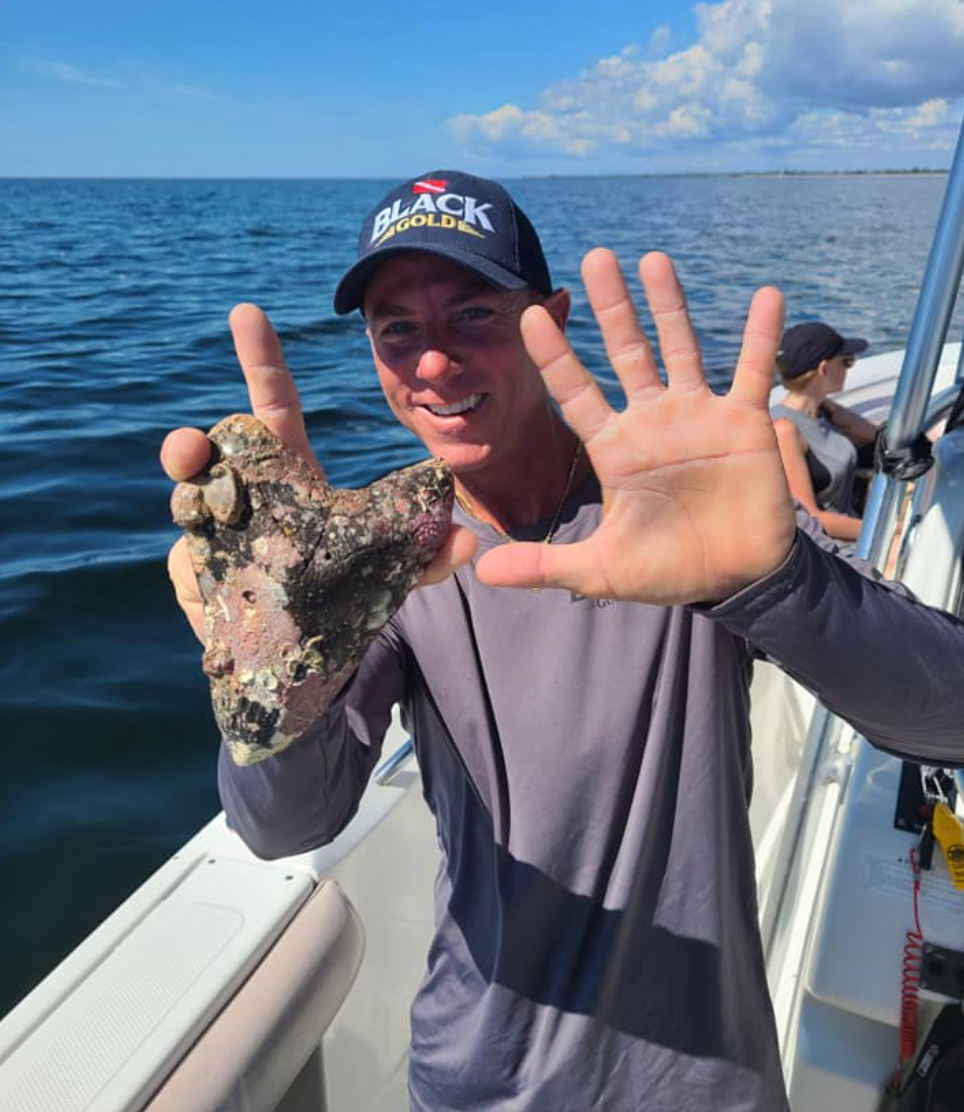 It’s not every day that you find an intact, prehistoric shark tooth the size of your hand just lying on the ocean floor. Even Michael Nastasio, an experienced diver and longtime aquatic fossil hunter, was shocked by the discovery he made on Oct. 15.

Captain Nastasio was running a professional charter that afternoon through his company Black Gold Fossil Charters, which takes paying customers on guided scuba diving trips to search for fossilized shark teeth, mammoth teeth, and other unique, underwater finds. (The name “black gold” refers to a nickname for fossilized shark teeth, which turn black as they absorb minerals from the surrounding rock and soil during the fossilization process.) The group was diving in the Gulf of Mexico, off the west coast of Florida, when Nastasio spotted the giant tooth on the seafloor.

The tooth, which belonged to a prehistoric species of shark known as a megalodon, measured just more than 6 inches long, making it the largest, and perhaps the most exciting, underwater fossil that Nastasio has discovered so far in his career.

“Well after 10 years of searching for a whole 6-inch megalodon tooth, I did it,” Nastasio posted on Facebook the night the discovery was made. “I’m so happy right now and literally still shaking.”

Fossilized shark teeth are found on a regular basis by beachcombers and scuba divers who frequent the Gulf of Mexico and South Atlantic, and this is partly because a shark can lose and re-grow thousands of teeth during its lifetime. Most of these discoveries, however, are only around one-eighth to three-quarters of an inch long, and they belong to more modern species such as bull sharks, lemon sharks, and great whites. Fossilized megalodon teeth that are in excellent condition—and especially ones larger than 5 inches—are exceedingly rare, even in a place like Venice that has been billed as “the shark tooth capital of the world.”

Although the largest megalodon tooth ever recorded is the roughly 7.5-inch specimen that was found in Peru, an American fossil hunter by the name of Vito Berducci—also known as the “Megalodon Man”—discovered a 7.25-inch tooth while diving in a coastal river bed in South Carolina back in 2004. These finds have been extremely valuable to scientists, who have yet to discover an intact megalodon skeleton, and instead use these fossilized teeth to approximate the overall size of the creature. Fossilized teeth have also helped scientists gain a better understanding of what the giant sharks ate and the habitats they preferred.

“Otodus megalodon was not only the biggest shark in the world, but one of the largest fish ever to exist,” according to an article in the U.K. Natural History Museum. “Estimates suggest it grew between 15 and 18 meters [or between 49 and 60 feet] in length, three times larger than the largest recorded great white shark.”

The word megalodon simply means “large tooth,” which isn’t surprising given that we’ve learned about the species simply by finding and studying its teeth.