Photos of floating, camping, and fly fishing through one of the most uninhabited and wild corners of Siberia 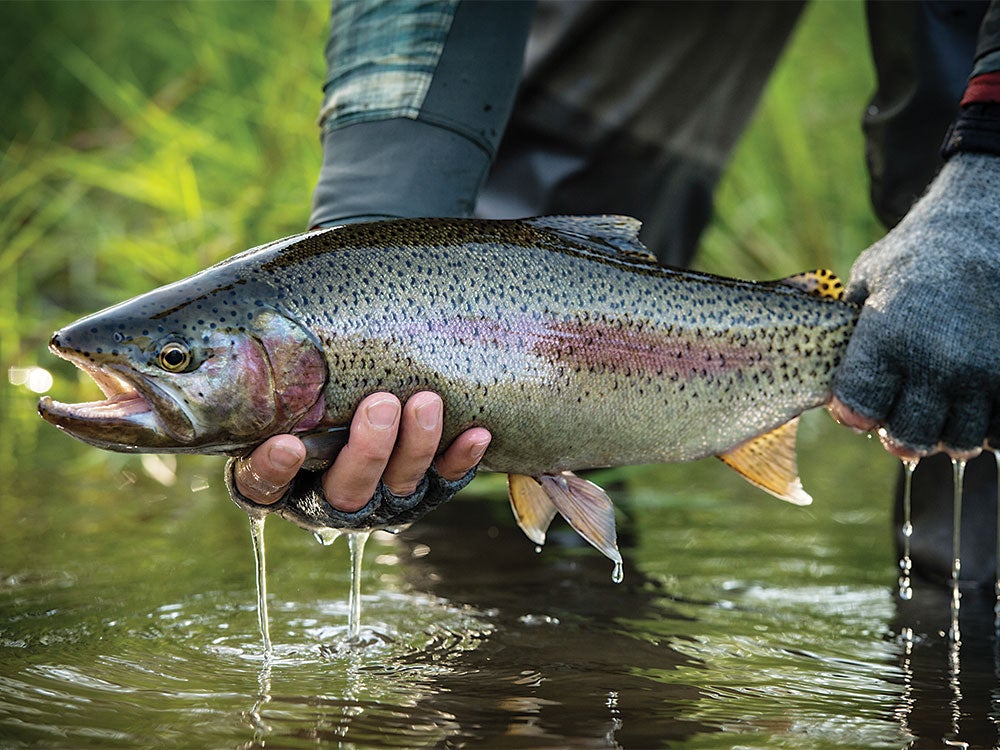 Even the not-so-big rainbows were fine specimens: well-proportioned and symmetrical, with unmarred fins. They were so chunky that we called them little footballs. Tim Romano
SHARE

For some people, the word “kamchatka” triggers memories of 12-hour stints staring at the board game Risk and plotting how to conquer that isolated Siberian landmass in their quest for world domination. A select few might know it as Russia’s proving ground for missiles and long-range weaponry. Then there are the rest of us: The diehards who want to visit a wilderness where 20-plus-inch rainbows snarf mice from the river surface like they’re hapless mayflies. On Kamchatka, such tales are more than rumors: These trout have a short summer, and with limited time to pack on the pounds, they’ll hit anything. This place is everything a U.S. angler dreams about—but getting here is half the adventure.

Kamchatka juts 780 miles into the Pacific Ocean, a peninsula almost the size of New Zealand with less than a tenth of the population. A single road runs only partially along its length, most of it dirt. The landscape is stunning, studded with 160 volcanoes and 100,000 rivers and streams. Most of those waters hold native rainbow trout, and most of those trout have never encountered a human being.

We took off from Anchorage and landed in Kamchatka’s only city of any size, Petropavlovsk-Kamchatsky, which is home to most of the nation’s nuclear submarine fleet and completely isolated from the rest of the country. Navigating the vast wilderness beyond it requires a helicopter, but the available craft aren’t exactly new. We endured a three-hour bus ride to a field where our whirlybird was packed with anglers, who then unloaded at various outposts during the next four hours of hopping and dropping. My buddies and I, along with our guides from the Best of Kamchatka, were the last stop. Our mission was to fish the spring-fed Dvukhyurtochnaya River (the Two-Yurt River to us) over the next six days, stopping at primitive camps every night of our 50-mile-long float.

Upon arriving, we found the river all but choked with fish. We’d heard this was one of the tougher seasons in years, with fewer salmon returning to the system and subsequently fewer big rainbows following them upstream. My first day was frustrating, with just a few swipes at my fly. Nothing came tight until late in the day, when I finally got my mouse-swinging technique down. Once my buddies and I started to understand the nuances, throwing rodents proved insanely addictive. We tried big dries, streamers, and even a few nymphs, but why bother when fish gobbled mice on the surface with reckless abandon, sometimes striking two, three, or four times before burying the hook?

And so it went for a week straight: Wake up, rig up, fish for trout and salmon all day—all while floating through some of the most remote and uninhabited scenery on Earth. 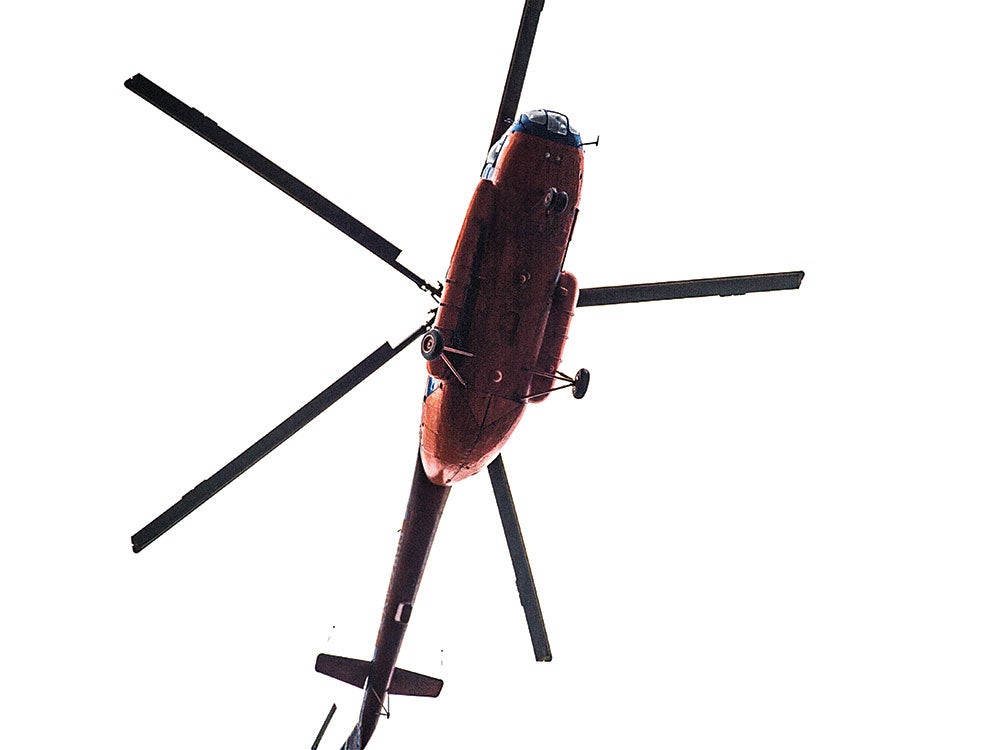 Get to the Chopper

Accessing this vast wilderness requires the use of air transport, which meant mainly big, old helicopters. Ours was a 1980s-era Mi-8.

Every time you turned a corner on the river, the scenery would change. These bluffs felt like Wyoming studded with East Coast deciduous forests. 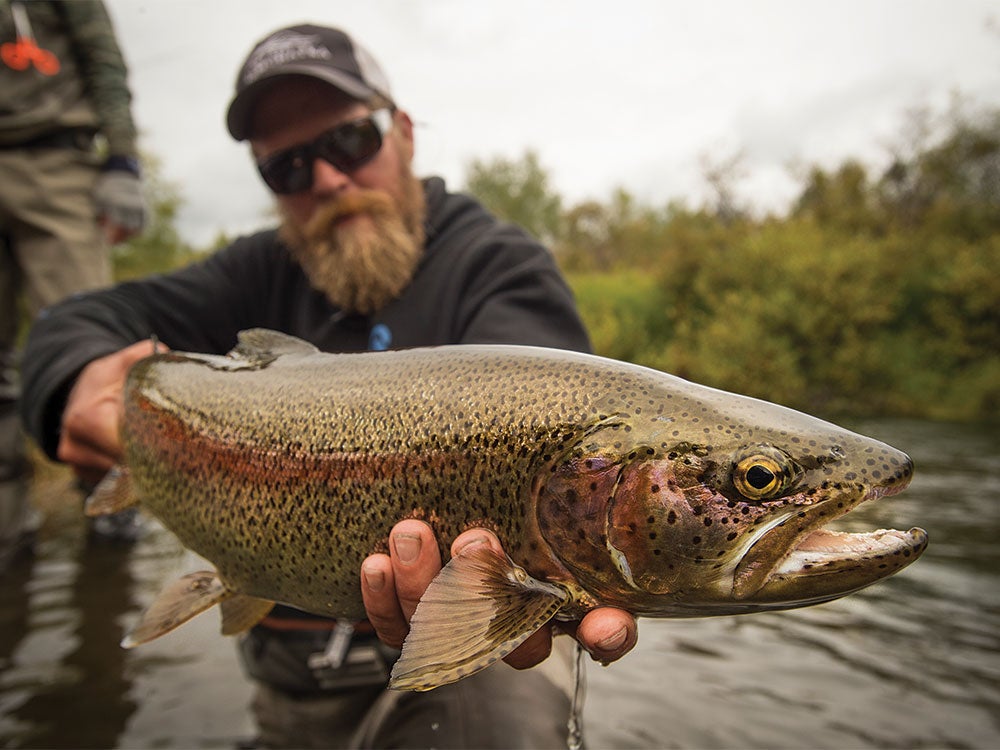 This trout was about 25 inches, and one of the last I caught on the trip. It tried to eat my mouse three or four times, then hit it a foot from the boat. Somehow I was able to set the hook. 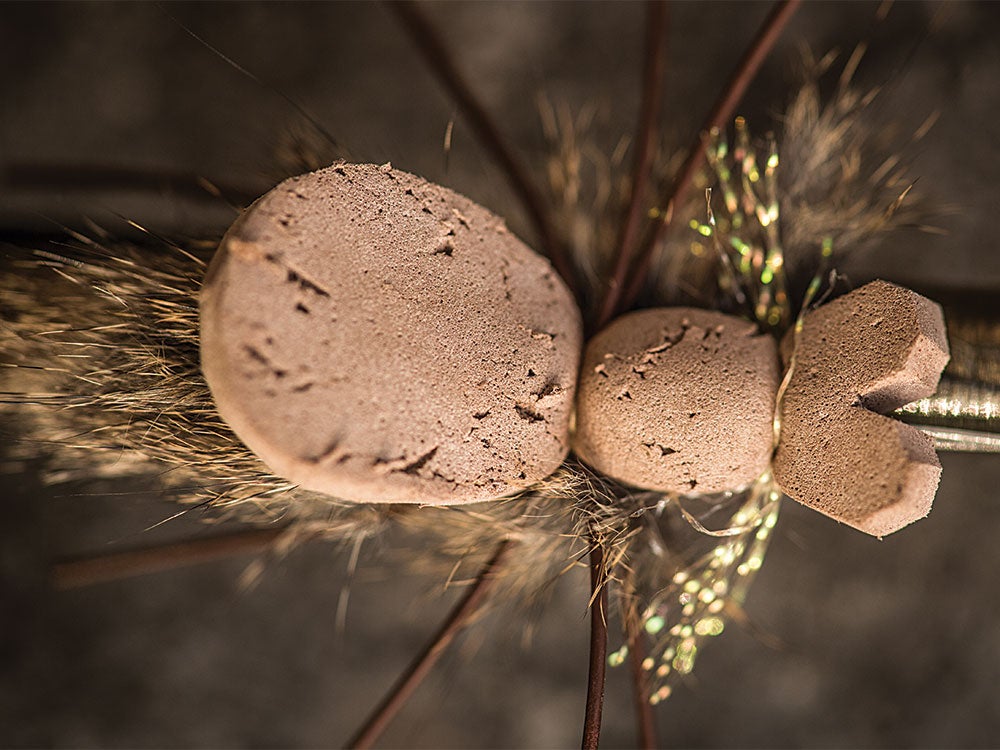 We brought a ton of different rodent patterns, but this one—a Mr. Hankey—was our mouse of choice. Note how the foam is all chewed up. 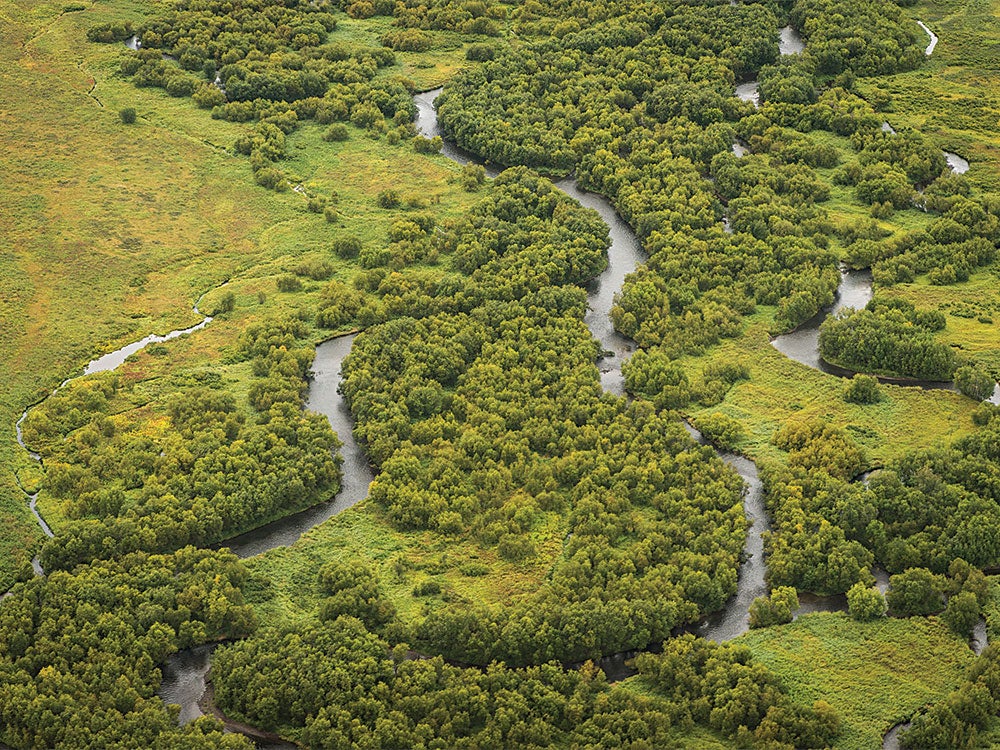 The number of fishable streams on Kamchatka is overwhelming. It’s incredible to look down from the chopper at a creek, and realize that no one has probably ever fished it. 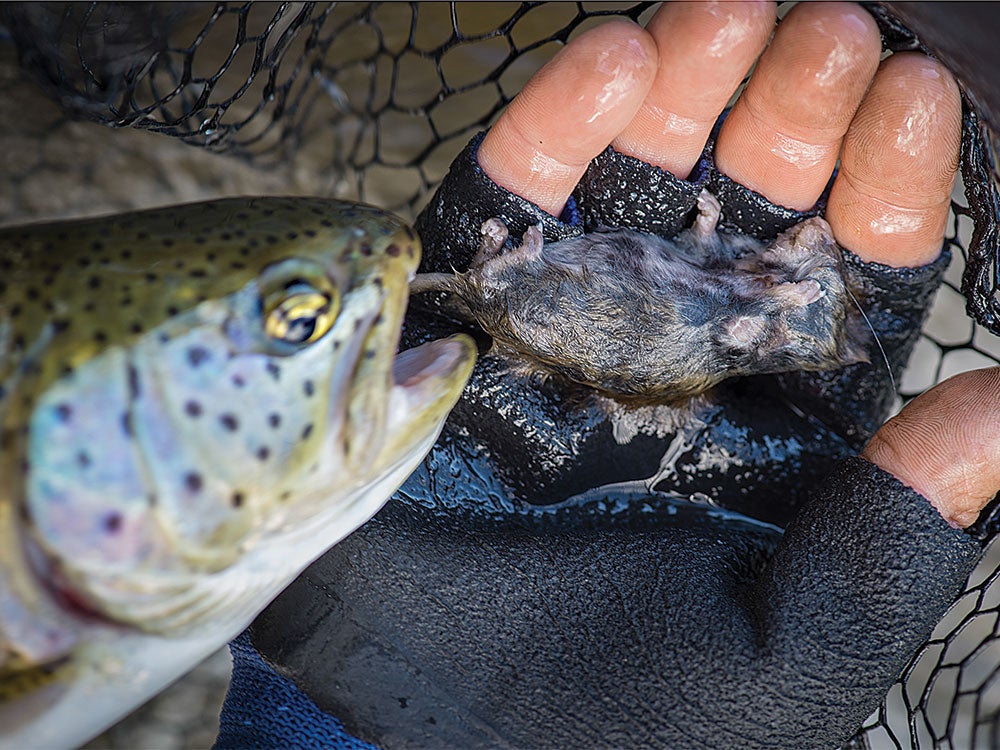 After landing this trout and unhooking my mouse fly from its lip, the fish yakked up a dead mouse that had been lodged in its throat. 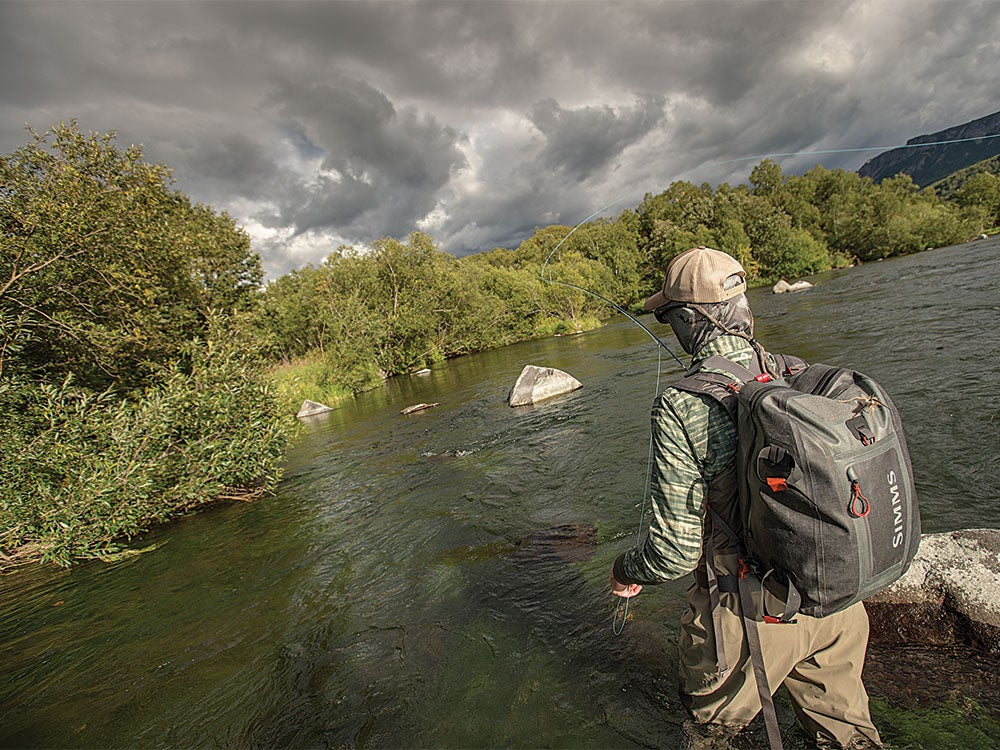 Any spot on the river is worth checking. Trout lurk in pocket water, wait in flats, hide in runs—anywhere you threw a fly, a fish might hit it. Our guides were strict about releasing everything, which helps explain the health of the fishery. 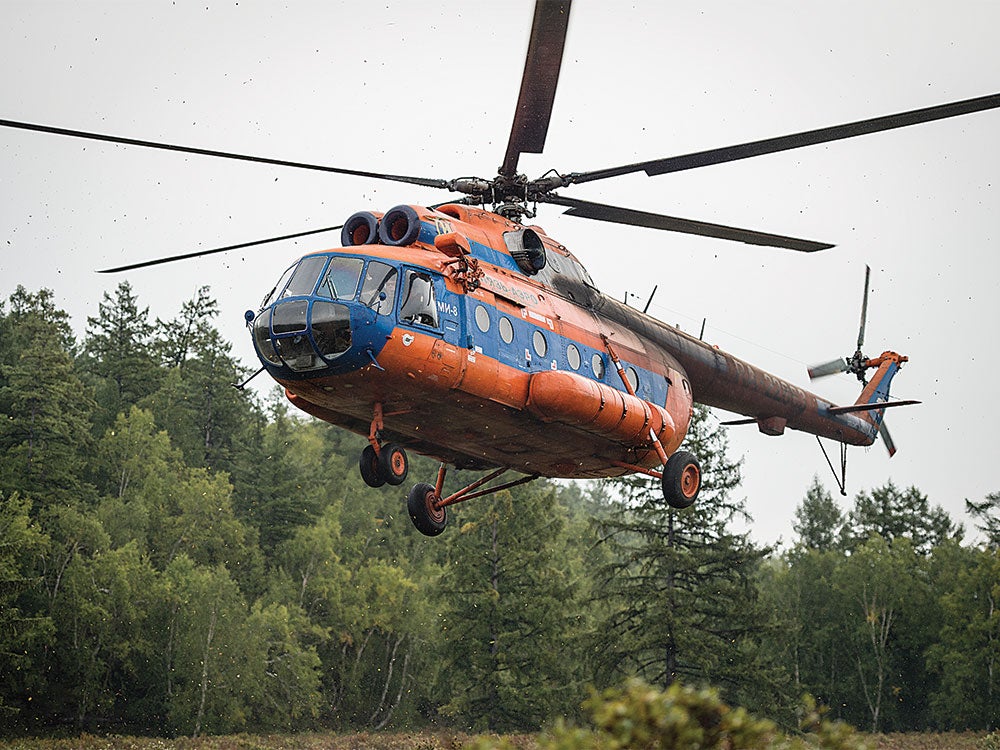 The Mi-8 is a Soviet-designed military-transport helicopter, and the models we flew in were vintage USSR. I’ve been in plenty of helicopters, and each flight usually has strict safety orientations. No one bothered with that here.

Even the not-so-big rainbows were fine specimens: well-proportioned and symmetrical, with unmarred fins. They were so chunky that we called them little footballs.

When we weren’t floating, we spent plenty of time fighting brush. Here we rigged lines to help us navigate the embankment between our camp and the river. 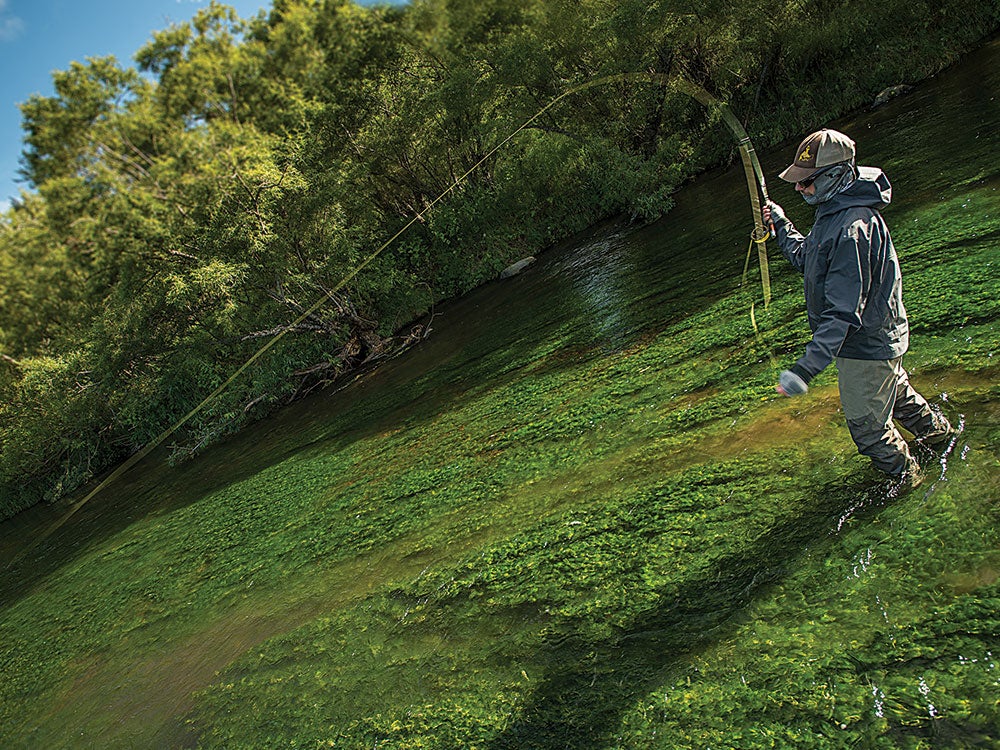 Plenty of bugs hide in the spring-fed vegetation. We used mostly 6- and 7-weight rods to skate mice across the stuff, and the fish lunged out of the weeds to hit them. 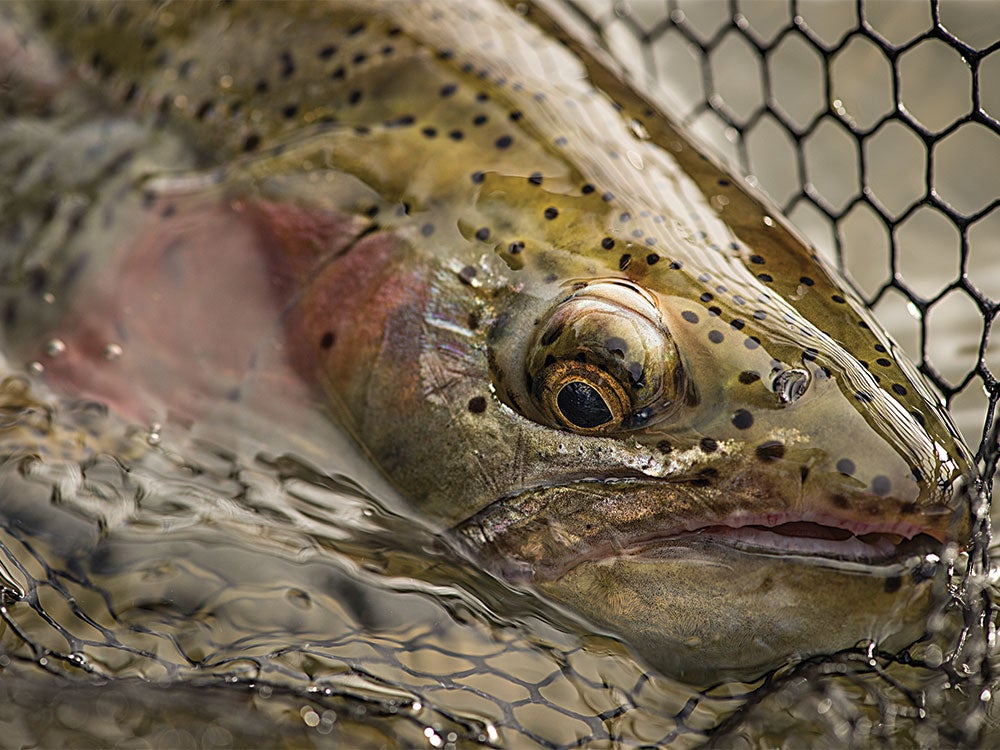 Rainbows are native to Russia, where they’re just as tough as their environs. The trout here were plenty strong, liable to fight hard and jump often. 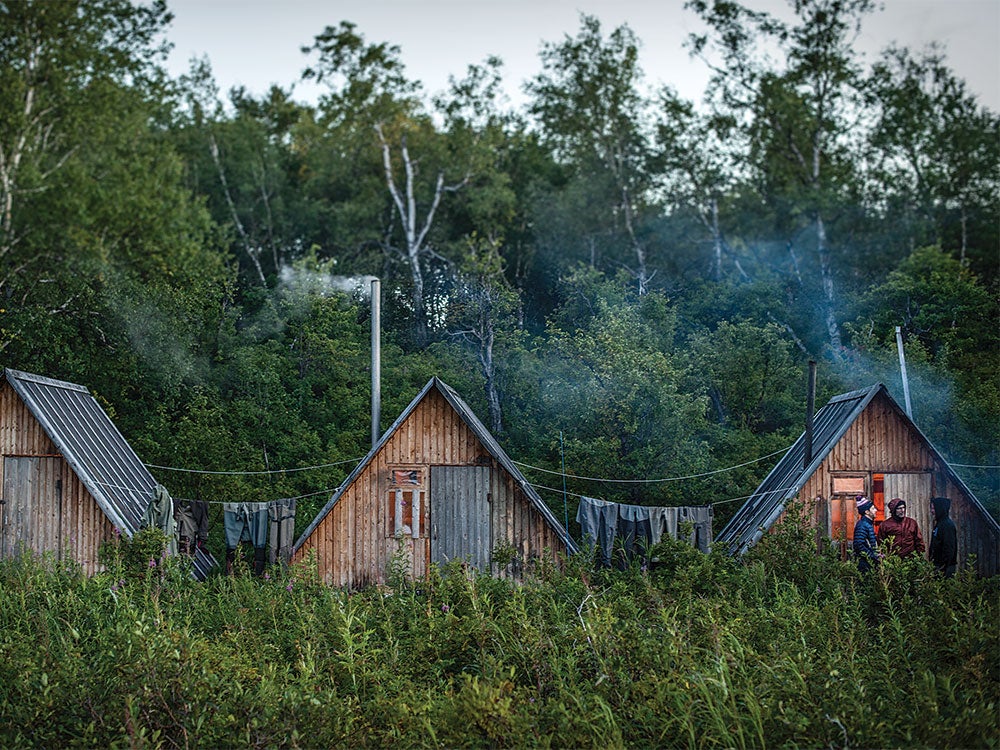 We stopped at a different rugged camp each night. Cabins were stout but spartan, with fire-heated shower water and abundant claw marks from bears. 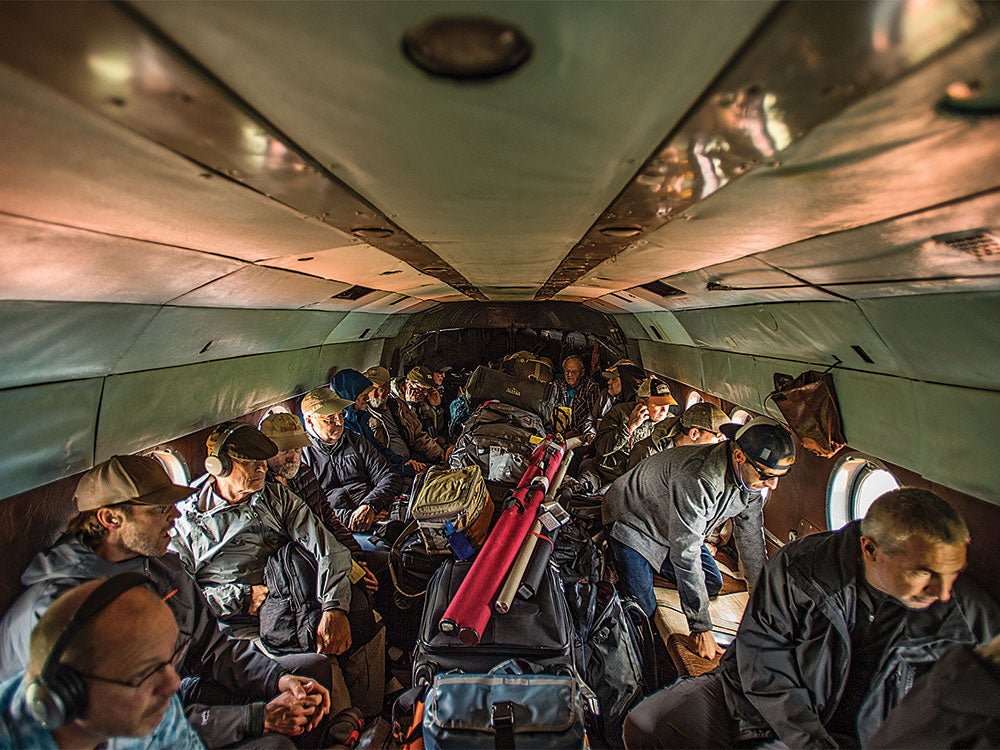 Each copter was crewed by two pilots and a mechanic. At one point I counted 25 people on board, all with gear for a week. None of the cargo had been weighed. 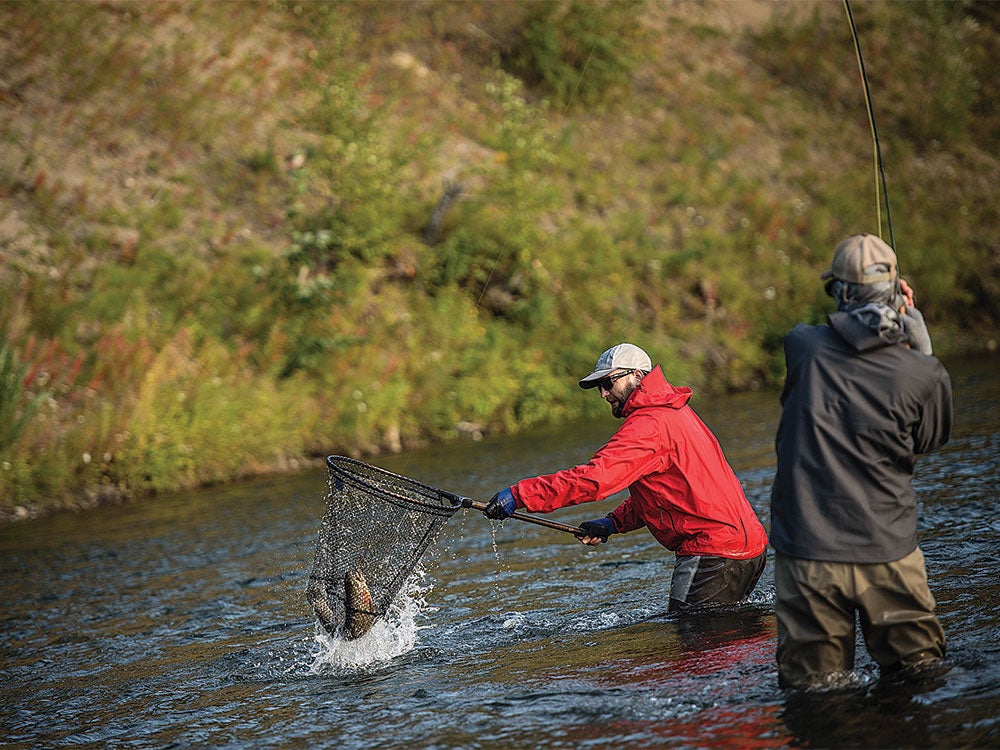 Landing rainbows by yourself was difficult at best. With big trout, strong currents, and bears in the brush, it was smart to always have a pal nearby. 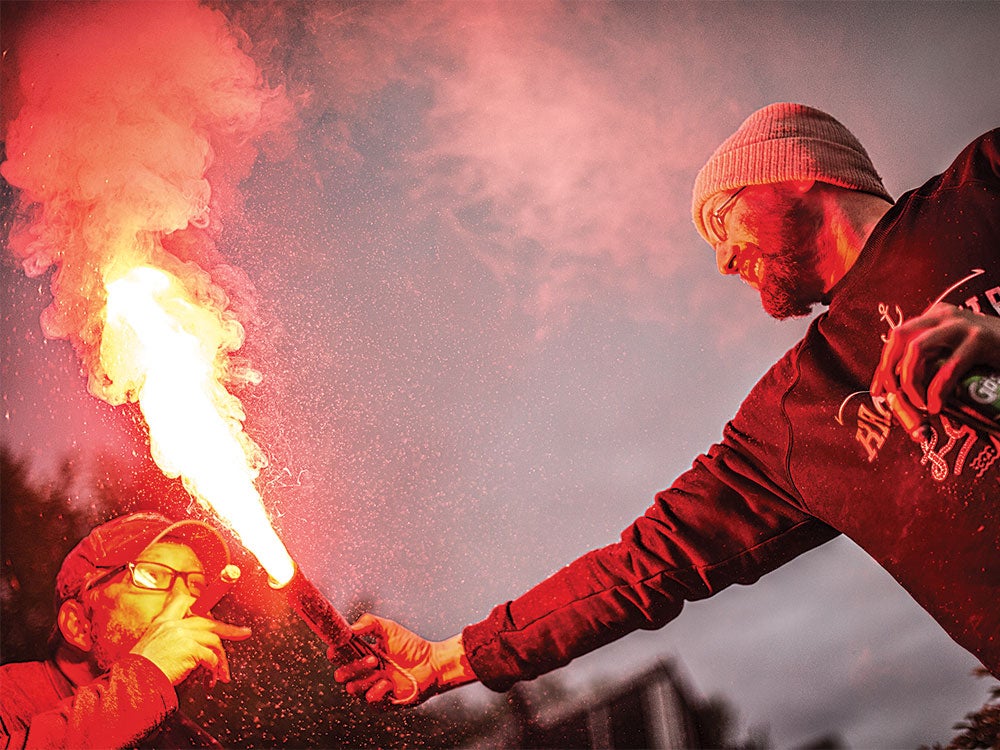 On the last night of our trip—which was also the last trip of the season—our guides broke out their home brew. Lighting a cigar with an emergency flare was effective, if unwise. 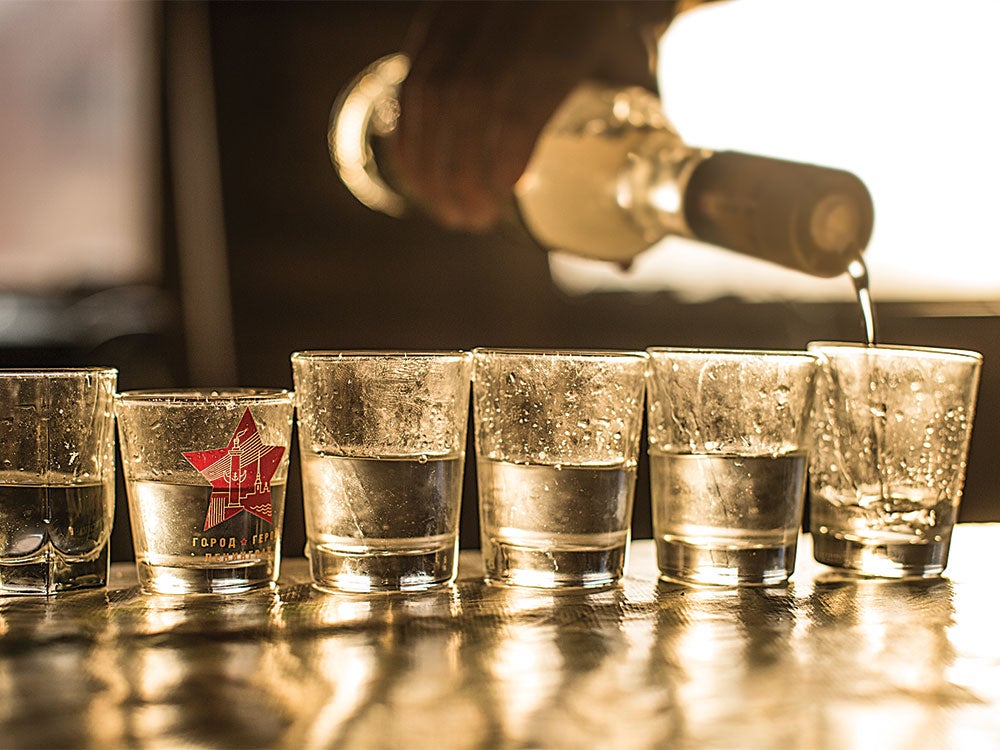 We drank vodka, but our guides also brewed braga, or Russian prison wine. Imagine the gnarliest moonshine you’ve ever had, then double the effect. 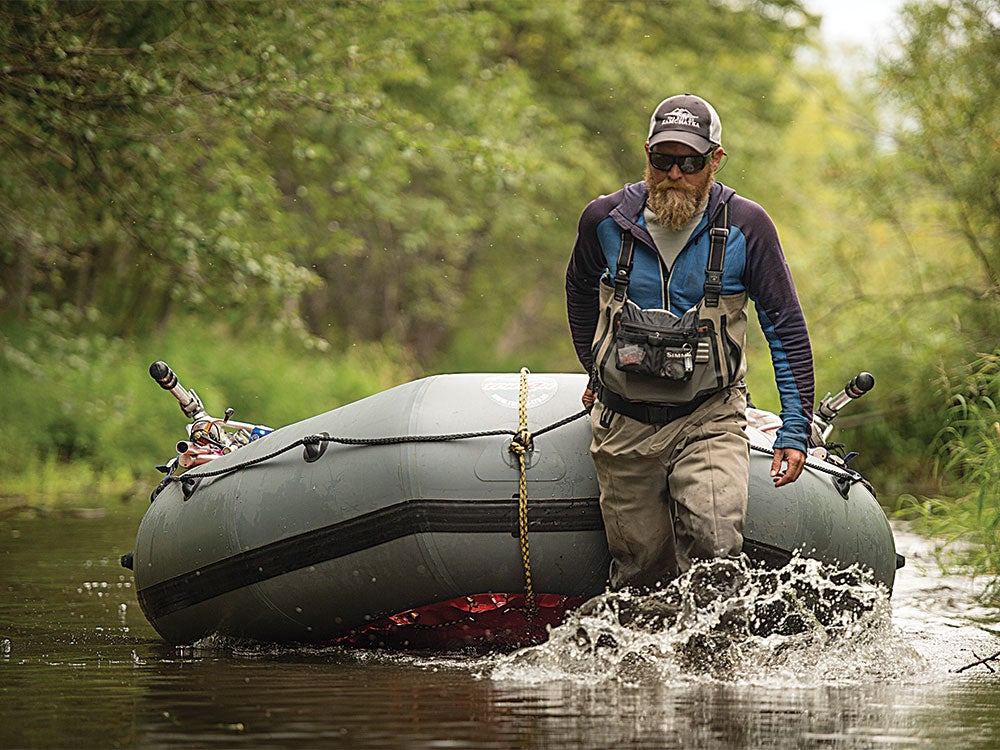 The river was intricately braided, often forcing us to walk through back channels to reach our destination.

Kamchatka is home to one of the densest brown bear populations in the world, but we weren’t allowed to bring bear spray on the helicopter. We just had one ancient shotgun among us, and a bear dog to guard camp. 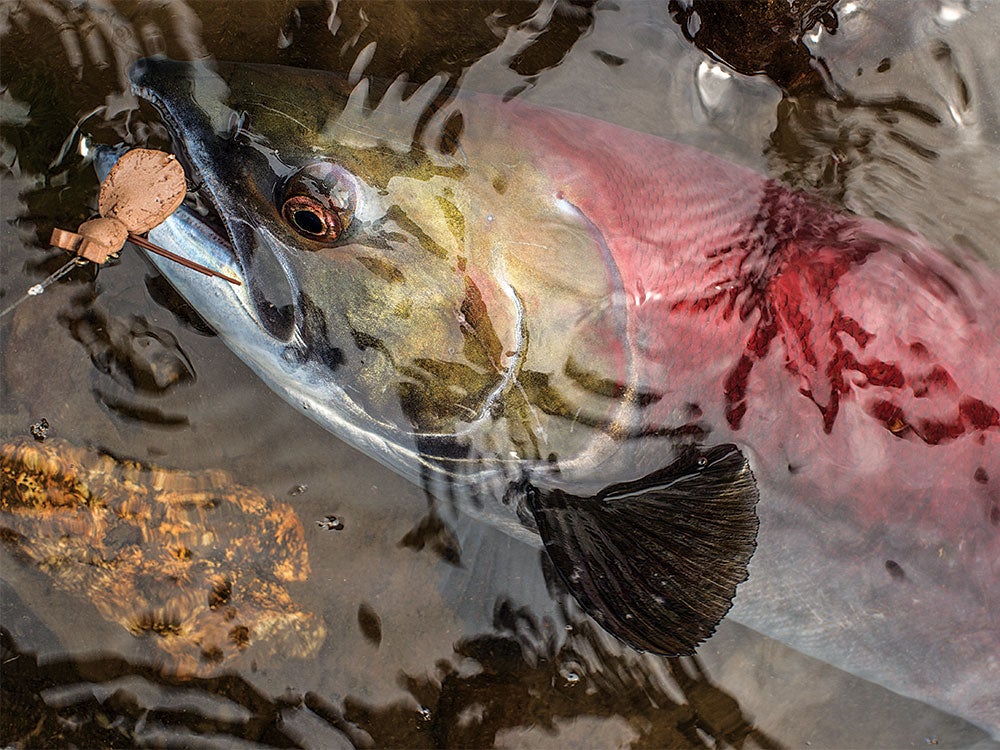 I was casting to a rainbow behind this salmon when the sockeye smashed my mouse. We had heard salmon were sparse this year, but we found plenty of kings and sockeyes up and down the river. July and August are the best months to visit, but they certainly aren’t the only windows for great fishing.
Adventure
Fishing
fishing tips
fly fishing
Freshwater Fishing