5 Bluegill Facts That Will Help You Catch More Fish

Bluegills are catchable all season, if you’re clued in to their patterns 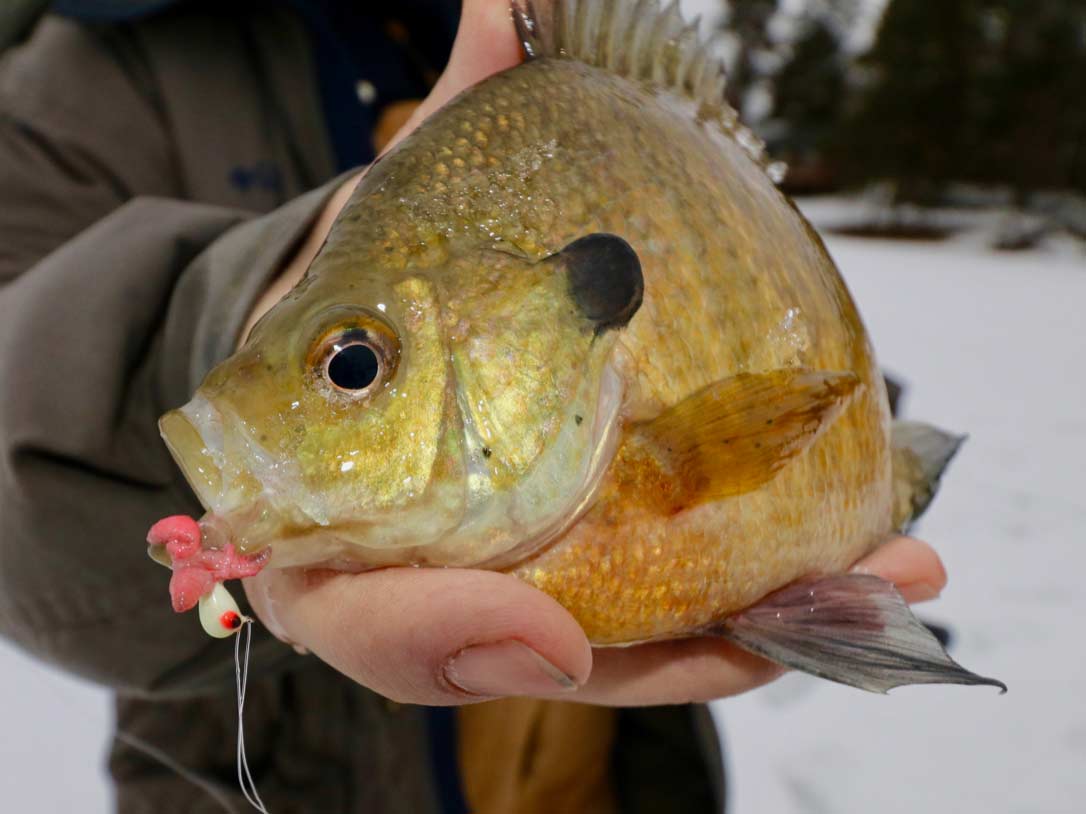 Widely distributed across the ice belt, bluegills are among the most popular targets for hardwater anglers. Whether your adventures take you to the frozen surfaces of natural lakes, ice-capped river backwaters, or even crunchy farm ponds, you are likely within easy reach of quality winter bluegill fishing. Bluegills follow easy-to-predict patterns beneath the ice, and remain, in general terms, reasonably active and catchable throughout the season. Moreover, you won’t need a home equity loan to build a comprehensive collection of bluegill gear.

Anytime is the right time to hoist ‘gills through holes in the ice. Here are five facts that will help you better understand this exceptional panfish, and a bevy of tips that will keep your bluegill rods bending during the ice fishing season.

Small aquatic invertebrates are the primary forage throughout the bluegill’s lifespan, and are particularly important during the hardwater season. Gone are the small leeches and magnum mayfly larvae that captivate the bluegills’ attention during the summer months. As water temperatures plunge and ice covers the surface, the bluegill buffet shifts to bloodworms, freshwater shrimp and scuds, and even tiny zooplankton. Yes, the biggest ‘gills in the lake are probably on a steady diet of small minnows, but the bulk of the population is getting through the winter on bugs.

An invertebrate-based diet means that we need to offer bluegills opportunities to eat small, buggy baits. Waxworms, which are the larvae of wax moths, and spikes or eurolarvae, which are blue bottlefly maggots, are the most popular live baits for hardwater bluegills. Dress a small tungsten jig in the 3-to-5 mm range with one or two waxworms, or twice that many spikes, to create a compact, buggy bluegill bait with powerful visual, scent, and taste appeal. Purists who favor exclusively artificial offerings should consider very small jigs – in the 1/50 to 1/80 oz range – dressed with a compact, lifelike soft plastic, or even some of the small wet flies or nymphs you have in your summer fly fishing collection.

Like their largemouth and smallmouth bass cousins in the larger family of sunfish – the centrarchids – bluegills are primarily sight feeders. Yes, you’ll stumble upon the odd bluegill here and there while crappie fishing at night, but for the most part, ‘gills are most active during bankers’ hours, when the available filtered sunlight illuminates the water column. In fact, as the sun sets in the west, once-abundant bluegills will often disappear from your sonar display, frequently to be replaced by other centrarchids: crappies.

Because of the bluegill’s sight feeding tendencies, be prepared for them to zoom in and stop just short of your bait to take a closer look. When you see this happen on your sonar unit, the best approach is often to simply hold the bait still, or perhaps just work it with a nervous quiver, like you might have after your fifth cup of coffee. Exaggerated jigging motions will send an inquisitive bluegill packing, as will unnatural spinning of the bait while being held still. Bait spin arises from line twist, which is generated as a side effect of line being collected by your spinning reel’s bail and wound onto the spool, You can minimize bait spin by tying on your jig with a loop knot, by using an inline reel, or by inserting a small swivel between your main line and leader. Another important consideration is water clarity and its impact on bluegill lure selection. In clear water, select jigs on the smaller end of the size spectrum, especially ones in natural patterns or dark colors. In turbid or stained waters, however, somewhat larger jigs in brighter colors will help to capture bluegills’ attention. In particularly dark waters or during low light periods, jigs fortified with glow resins will enhance your catch rates.

Read Next: How To Rig Your Ice Fishing Rods And Reels For Any Fish

When making a feeding decision, bluegills have the uncanny ability to inhale and subsequently reject a bait with remarkable speed – so fast that even the quickest angler fishing with the most sensitive graphite rod may still miss a significant fraction of bites. I have witnessed this behavior many times with the help of an underwater camera set to monitor my bait and the fish interacting with it. Watching a big bull suck in a bait, and blow it out just as quickly, is simultaneously frustrating and fascinating.

Anglers can employ a pair of strategies to hook more of the indecisive fish that rapidly reject their offerings. First, consider spooling up with a thin-diameter braided main line, rather than monofilament or fluorocarbon. Braid has the advantage of not coiling as it comes off the spool, and as such, anglers have a better chance of seeing or feeling an indication that a strike has occurred before the bluegill has time to reject the bait. A PTFE-coated braid like Power Pro Ice-Tec will minimize the amount of water absorbed by the braid and the opportunity for that wet line to stiffen or freeze. Select a braided line that has enough diameter to resist digging into itself on the spool after a hard hookset or when fighting with a wayward pike or bass; 8-to 10-pound-test braid, which typically has the same diameter is ultra-thin 1-to 2-pound test monofilament, is a reasonable place to start.

A second way to enhance your bite detection ability is to add a spring bobber to the end of your bluegill rod. Hyper-sensitive spring bobbers fashioned from a thin titanium wire are perfectly balanced for use with small bluegill jigs, and can be sensitive enough to reveal if bluegills have successfully picked the jig clean of waxies or spikes. While most premium ice rods are well-suited for detecting bites from more aggressive targets like perch, walleyes, or trout, the spring bobber remains a useful accessory for finicky bluegills.

4. Bluegills School According To Size

The bluegill social structure frequently dictates that fish of a particular size or age class school together. This means that if you’re catching mostly 6-inch bluegills at any given time, it’s likely that you will continue to catch that caliber of fish until you, or the fish, move on. It is uncommon to find bluegills of exceptional size – those older ‘gills that are 10 incches and longer – mixed in with fish that are one to two years old. In fact, memorable bluegills are frequently loners or associated with a loose collection of only larger individuals.

There are two ways to determine a hardwater bluegill’s size. The first, of course, is to catch a few fish from a particular hole and measure them the old-fashioned way. A second, faster, and more elegant way is to learn to interpret the sonar returns displayed by your fishfinder. Multiple thin, low-intensity returns that zoom rapidly through the water column are associated with smaller fish. On the other hand, sonar returns that are thicker, more intense, and rise and fall slowly on the sonar display are correlated with larger fish. A CHIRP sonar-equipped hardwater fishfinder, like the Humminbird ICE HELIX 7 G3, is an invaluable tool for rapidly determining the number and sizes of the fish found within the unit’s sonar beam. You may need to spend some time learning to fine-tune the sensitivity and other key settings of your fishfinder to confidently determine fish size, but once you do, your bluegill fishing will become far more efficient: you’ll be able to present baits to the larger bluegills that you want to catch, rather than simply sorting through dozens of small fish in hopes of hooking a larger one.

5. Bluegills Are Harbingers Of Things To Come

The behavior of bluegill schools, as revealed by the sonar returns on your fishfinder’s display, provides an excellent indication of things that are happening, or about to happen, beneath the ice. During the day, if an active school of biting bluegills suddenly disappears from view, it is likely that a panfish-loving predator, like a northern pike or largemouth bass, is lurking nearby. Consider dropping down a larger offering rigged on more robust tackle to quickly target this bonus fish. Likewise, as afternoon turns to evening, bluegills frequently become more closely associated with the bottom, with individuals descending deeper into the water column. As this happens, you may see other signals starting to appear higher on your sonar display; these are most often crappies, which graze upon the same buffet of small invertebrates that attracts bluegills, but are more active during low light periods.

Read Next: How to Icefish for Panfish Like a Pro this Winter

As local regulations allow, it pays to be a two-fisted angler at this time of day, targeting the bluegills that are settling in for the night as well as the crappies that are gearing up for a period of enhanced activity. This is the time to fish two different baits at two different depths through adjacent holes. There’s no harm in sticking with the same bluegill program that carried you through the day, fishing a small tungsten jig tipped with live bait for ‘gills that are close to the bottom. For crappies, suspend a small minnow rigged on a teardrop jig beneath a sensitive foam bobber. Place this minnow about half-way down the water column, specifically targeting high-riding crappies. During the low light periods of dawn and dusk, you’ll almost exclusively catch bluegills close to the bottom, while crappies will be suspended higher in the water. As daylight fades completely from the sky, stow the bluegill rod and enjoy the crappies, which, on very clear lakes, often remain active through the night.