Winter Fly Fishing: How to Catch Trout on Streamers this Holiday Season 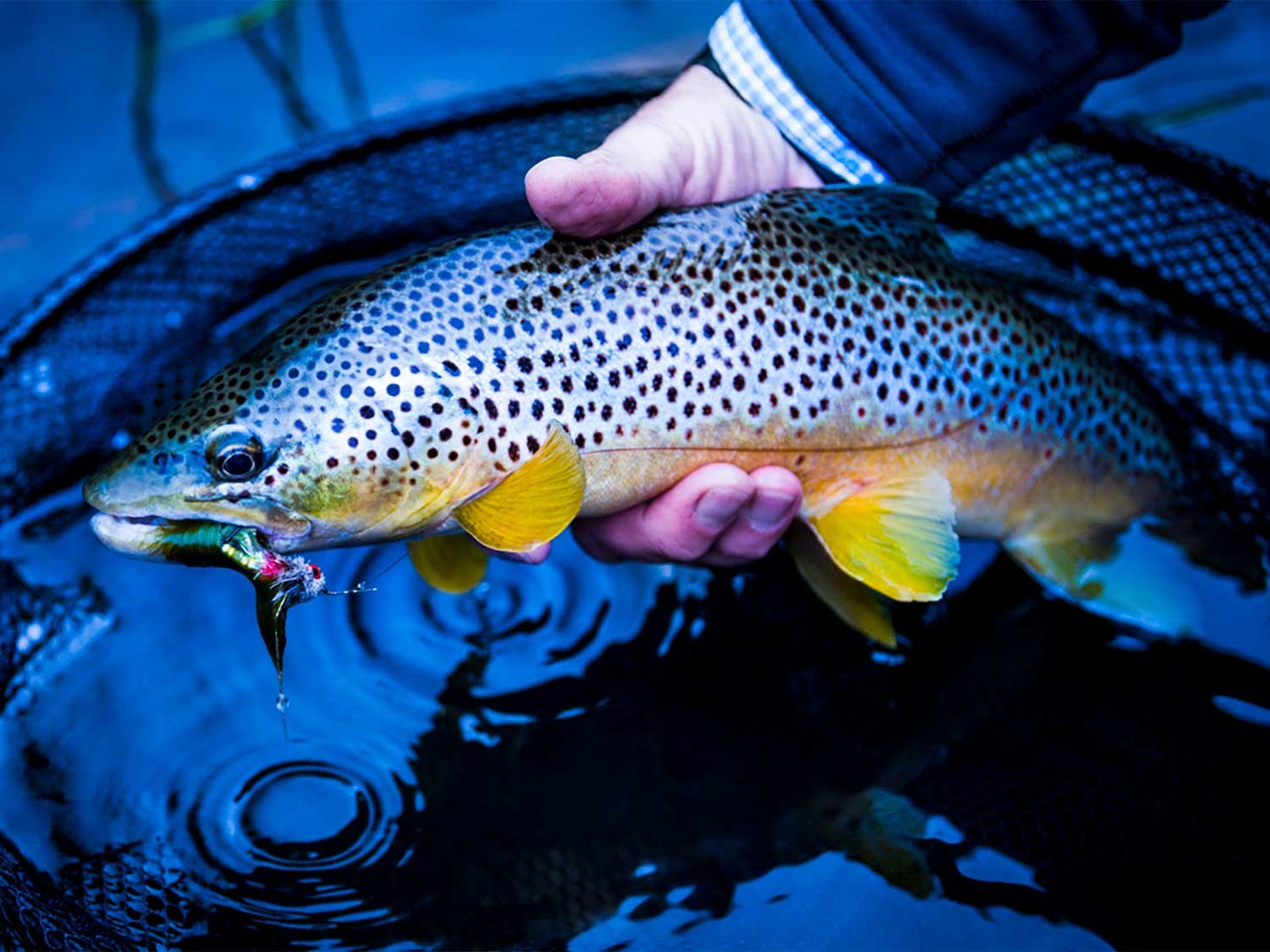 It’s the most wonderful time of the year! Big browns will eat streamers in winter. Dave Karczynski
SHARE

On the first day of Christmas my true love gave to me: a brown trout in a cedar tree.

Translation: my wife signed off on a pre-Christmas streamer trip.

I love winter fly fishing for trout. It’s relaxing in a way that spring and summer trout fishing just isn’t—not for me at least. During prime time there’s just too much going—bites starting up, bites winding down, baitfish migrations—and the stress of getting it just right is almost too much. On a typical day I might do an all-day, big-water streamer float, rush back upriver to fish my favorite evening dry fly water, then stagger back to camp in the dark, where I’ll inspect the spiderwebs near the creek that flows through the property to see what I missed that day. At night I’ll lay in bed and wonder: did I make the right choices?

In the winter, by contrast, life is easy: the creeks are closed, there are no hatches, and the boat launches are deep under snow. By the time the holidays roll around I find myself blessed with the absence of any and all choice. I lace up my boots and fish streamers on foot.

Though it might not seem apparent at first glance, winter conditions are prime for the streamer angler. The trout are post-spawn and looking to recoup lost calories. Clouds are low, the sky is gray, and snowfall creates extra camouflage. Fishing pressure is light to non-existent. Merry Christmas and Happy New Year, indeed. Here are a few tips for getting the most out your time between the snowy banks.

On the very warmest days fish will still behave like their spring and summer selves, setting up in quicker water to take advantage of solar-activated nymphal activity, but for most part winter fishing means seeking out slower holding water: backwaters, side channels and slow bankside flows with abundant structure or cover. In my neck of the woods—Northern Michigan—this means wood in about 1.5-4 feet of water. I will rarely cast to water deeper than that. One of the best bits of streamer information I’ve ever gotten is to cast where you can see the bottom. The closer the fish are to your fly, the more likely they are to chase it.

Not only should you be fishing slower water in winter, but you should be fishing slower presentations. This is not to say that hot fish won’t chase when the water is cold. They certainly will, and if you are covering 10 miles of river with a boat, casting robotically and stripping aggressively, you are bound to find a few fish which are in a particularly sour mood. But wade fishing, where you are covering 800 yards instead of 8 miles, is a different animal altogether. Instead of trying to jar a few aggressive fish into chasing, you are trying to feed each and every fish between where you boot in and boot out—think door-to-door salesman instead of viral ad campaign. For custom pitches to close the deal on a neutral customer, you’ll want a fly that can be both cast0 easily and presented compellingly—a moderately sized, moderately weighted streamer with a floating line and a tapered leader.

I’ve found that a single hook fly, size 4, is just about perfect: big enough to garner the interest of a fat fish well ensconced in his lair, but small enough to cast with ease and land with delicacy during the low water of a January afternoon. I also like moderate weight in the form of a beadhead or conehead with maybe a few wraps of non-lead wire—tungsten-weighted flies are too hard to fish slowly in the gentler flows winter trout prefer. My absolute favorite winter fly for this type of fishing is a white Sparkle Minnow, which on gloomy days does not so much sparkle as glow. Among all of its other advantages, it’s very easy to see, thus making your fly (and by extension the trout chasing it) easier to keep track of.

It’s easier said than done. Let’s say you position yourself directly across from your target, straight across the flow. You cast in front of a prime lie and start pulling the fly straight back at you. Yes, this presentation succeeds in getting the fly moving cross current— showing the flee–but it’s going to be too high in the water column and may not even be visible to a fish hunkered down deep in cover. No Bueno.

Read Next: The Godfather of Montana’s Bighorn River

Alternatively, you could try standing upstream and off to the side of your target—in other words, in position to quarter downstream. You cast the fly, let it drop to the level of the trout with an upstream mend, and then strip it back up to you. This time you’ve succeeded in showing the fly, but not the flee–at least, not the way any injured baitfish flees. Wounded minnows do not swim upstream.

The solution is to think of your presentation in a few different steps. First, take a position up and off to the side from the spot you want to fish—that same quartering downstream position. Next, strip off the amount of line you’ll need for the cast, plus ten or so extra feet. Cast well upstream of the lie, then throw a big upstream mend with half your remainder fly line—this will help your fly drop. While your fly is sinking, gather up your remainder slack and throw a big downstream mend. This will create a bow in your fly line, and ensure that when you begin your retrieve, your fly will move in the direction of the bow, across the face of the fish. Put this all together and voila—you’ve shown the fish the fly, then made it flee just like a natural would.

As might be apparent, line control, both during and after casting, is critical here, so I like a traditional trout line for this sort of fishing: think a Scientific Angler MPX or Rio Gold, which both have substantial rear tapers for manipulating your fly at distance. What you don’t want is an aggressive weight forward head and thin running line. A lot of modern streamer lines of this sort are designed with boat fishing in mind—long-distance casts where the fly line is shot after building extreme line speed rather than shorter casts where the fly line is laid down after being carefully aerialized. Presentation-wise, the winter wading angler borrows much from the dry fly angler who stalks into position, studies the scene and makes that one good presentation that counts.

Emphasis on one. It’s important when fishing this way to stagger your casts—that is, to put measurable distance between your presentations. Less is much, much more. To better understand this, imagine the angler who makes 10 casts each two feet apart as he tries to cover every inch of a lie. The brown trout he wants to catch is going to see the same baitfish falling out of the sky again and again—a very curious behavior from a fellow fish. By the time it’s close enough to chase, the trout’s alarm bells are ringing, and he decides to pass. And so, instead of trying to saturate a lie with 10 different casts, try to imagine “the spot on the spot” where your quarry is likely to ambush from and get into position to make on cast to that spot. This means you’ll spend plenty of time on the move, which is great because all that walking will ensure your toes don’t go numb too quickly (though—such is winter wading, they eventually will).

In conclusion, if you’re an angler adventurous enough to get out on the river during the coldest months of the year, winter streamer fishing on foot is the gift that keeps on giving. Your presentation skills will not deteriorate during the cold months, so there will be no sloppy “pre-season” casting come spring. Habitual boat anglers will discover new lies, even on water they fish regularly. And on any given day your odds of catching your best fish of the year, not just the season, are actually pretty decent. Of course, for every fish you catch you’ll also collect a few sudden gape-mouthed eats of fish you didn’t stick, images to deck the halls of memory and enjoy when it’s too cold to do anything but sit in front of a fire. As I sip my egg nog with family, I’m also thinking of a 22-inch fish busted my tippet like tinsel just last week. But I’ve got him marked for next time—a New Year’s fish if the weather pattern holds.