All About Retrieving Bumpers

Retrieving bumpers, or dummies, come in various sizes, weights and colors. They’re made of plastic, canvas and even foam. If... 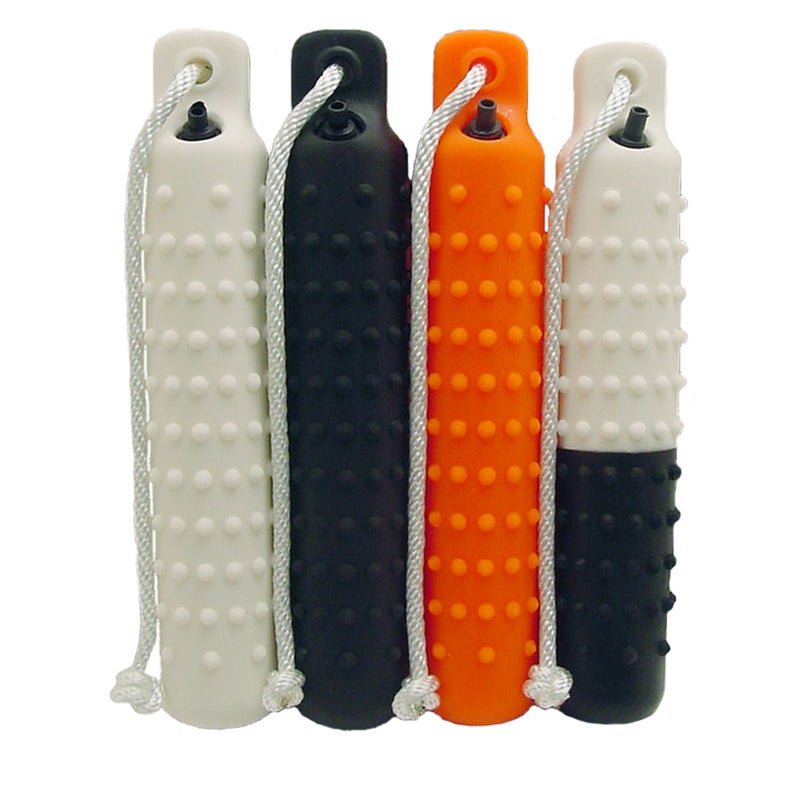 Retrieving bumpers, or dummies, come in various sizes, weights and colors. They’re made of plastic, canvas and even foam. If you’re wondering which type is for you and when you’re supposed to use different colors, keep reading for the answers.

As far as I know, retrieving bumpers originated from boat bumpers. You know, the plastic, air-filled bladders used to cushion a boat when moored to a dock. For the most part, they still look like the nautical accessories, but in the retriever world, as with any useful tool, a quasi-industry has been spawned and with it a myriad of dummy choices exist for you and your pooch to play with.

The most popular bumpers for drills typically are either plastic or canvas. Both have advantages and disadvantages. Since both types come in similar colors, it often comes down to personal preference as to which to use.

I used to love canvas bumpers. They provide a more natural feel in the dog’s mouth and are easy to grip. The core of these bumpers is usually made of closed-cell foam, cork or a similar buoyant material. You can inject bird scent into them or put them in a bag of feathers and they’ll readily absorb the odor; which is useful for teaching a dog to use his nose in the area of the fall or track a trail. They also won’t freeze and crack like plastic bumpers sometimes do, which is nice in the winter.

The biggest downside I’ve seen with canvas bumpers has to do with cleanliness. The same great qualities that allow canvas bumpers to easily absorb bird scent also allow them to soak up dirty pond water, urine and anything else you happen to set them down or throw them into. My wife finally refused to ride in the truck (or go into the garage) because of the odor emanating from them. In small amounts the odors can work like any bird scent and can assist a dog in using his nose to find a fallen dummy, but too much will also make him lazy and could cause him to give up if he doesn’t encounter scent immediately.

The other side is visual. Often you want white bumpers for marking, especially for young dogs, and the more you use the canvas bumpers the dirtier they’ll get. You can clean them a bit, but eventually they become very dark and dirty. It can work in your favor for advanced dogs by making them focus more on the motion instead of a high-contrast bumper, but for young or inexperienced dogs it can be a detriment. After they get dirty, however, you can use them for blinds; although you’ll have more scent associated with a bumper that has been used often, which, depending on what you’re trying to accomplish, can be a detriment, too!

While I loved canvas bumpers and used them almost exclusively, most of the dummies in my bag nowadays are plastic. Plastic bumpers are durable, easily clean up with a good scrubbing and emit very little scent. You can’t inject them with bird scent (generally speaking, that is) but that’s not a big deal in most instances. They often come with an air valve that allows you to adjust the amount of air in the bumper or add water. This gives you the opportunity to weight the bumper, allowing for longer throws, or to give them a higher or lower profile in the water.

The biggest downside to plastic bumpers that I’ve found is the feel in the dog’s mouth. If the pooch is panting or hot, the bumpers can be tough to hold with a coating of slobber on them. Ridges or knobs in the plastic help the dog grip the smooth plastic, but the excess saliva still makes it difficult. Canvas bumpers absorb that extra liquid and make them easier to hold.

1. How dogs see: Dogs don’t see in color; rather they see in shades of gray. Contrast and motion are important.

2. What you’re trying to accomplish: What color bumper you use will depend heavily on what you’re training that day.

For instance, if you’re working on marking drills, typically you want a bumper that’s highly visible and large enough show plenty of motion. Most of the time that will be a large white bumper.

White provides great contrast against most dark to medium-shade backgrounds like fields, tree lines, etc. Dogs can pick it out easily and follow the trajectory throughout the fall.

If you’re working in a wide-open area with a light background (lots of big, white, fluffy clouds or white buildings, etc), you might want to go with a darker bumper or a black-and-white, half-and-half bumper.

Many people will tell you that dogs can’t see orange. That’s not true. They see it. They just see it as a shade of gray. Apparently, that shade of gray matches many other shades found in the environment. Because orange blends in with grasses, most people use them for blinds so that the dog doesn’t just cue in on a white bumper and run to it (which is a drill used before going to cold blinds and for building confidence and trust). While the bright orange blends and hides the bumper from the dog’s eyesight, it makes it easy for people to see.

The concept is the same for other colors of bumpers (which range from dark green to gray to blue to yellow to camo to glow-in-the-dark and more): use a color that contrasts with the background that the dog will see behind it for marks and use a color that blends in with the environment for handling drills and blinds so the dog has to rely on you and can’t just use his eyes to pick out the pile.