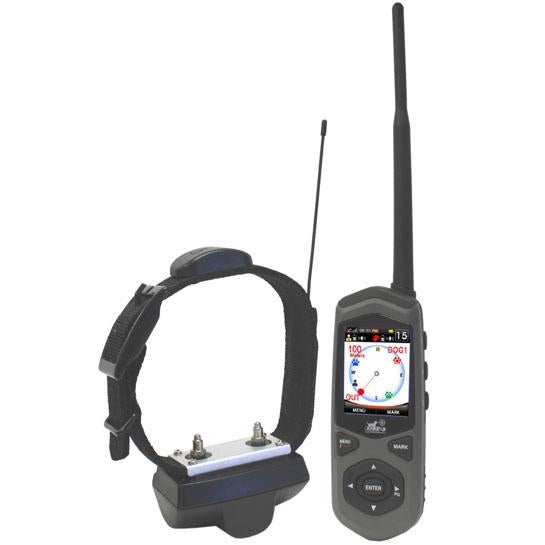 The premise is pretty cool. Using GPS, you can set a circular perimeter of 15 yards to 800 yards from a specified center spot. You can then set your warning and stimulation areas and levels. Warning areas will trigger the collar’s vibration or tone mode, or a combination of both and delayed stimulation. Fifty levels of intensity are available in the stimulation area. Once set, you can monitor your dog’s location relative to the center point and the collar’s status (Warning, Stimulation or Out of Boundary).

If Fido somehow busts through the boundary, the handheld allows short-range tracking of his general direction. The Border Patrol’s “Welcome Home” setting allows a rogue dog to re-enter the containment area without enduring stimulation.

The Border Patrol TC1 can store up to five waypoints, including the automatically saved Fence Center.

In addition to an at-home and on-the-road containment system, the unit is a fully functional e-collar training system with a two-mile, line-of-sight range and 50 intensity levels. Stimulation settings include vibration, momentary and continuous, as well as D.T.’s unique Jump Stimulation and Rise Stimulation. Border Patrol has a fully rechargeable Li-Ion battery system, which is reported to last 6-12 hours in the handheld and 12-24 hours in the collar, depending upon settings and usage (and the time increases greatly without GPS usage). The collar unit is waterproof and the handheld is water resistant. The entire system is expandable up to five dogs. Add-on units are sold separately.

While I think the idea is novel, I have a few questions about how a dog might perceive changing boundaries. When containment systems are used at home, dogs are conditioned to the boundary through consistent location — often with the use of identifiers such as white flags. They know to stop or else the wrath of an unseen god will be visited upon them. The same premise could be used with the Border Patrol, but it might be a bit confusing to the dog if you then take it on the road and change the boundary setting. The dog will either revert to a smaller area out of pure conditioning or receive corrections for pushing what had once been a consistent distance. I believe it would all have to work off the warning cue; maintaining a consistent proximity between warning and boundary stimulation would seem important.

I’m not saying that it won’t work, as the dog could very easily learn to transition the warning — zone cue from at home to a changing boundary distance on the road. But this seems like it could be confusing, at least until the dog completely understands what the warning cue means, regardless of location and surroundings.