Crossbows are often compared to their compound cousins, and with good reason. They both share many of the same components.... 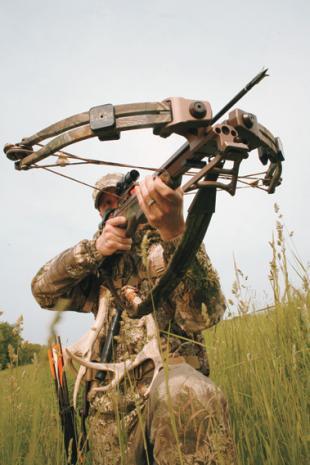 Crossbows are often compared to their compound cousins, and with good reason. They both share many of the same components. There are, however, three popular myths.

Myth: A crossbow is not a bow.

Fact: It’s not a compound bow. Nor is a compound a recurve bow just as a recurve is not a spear. And oddly enough, a spear is not a rock.

In the late 1960s and early ’70s when compounds were introduced, no archery traditionalist considered them bows either. Both bows are powered by limbs, which are drawn and captured by a crossbow trigger or compound’s mechanical release.

Myth: Crossbows are deadlier than compounds at exaggerated distances.

Fact: Compounds are deadly at exaggerated distances too. Both weapons are amazing mechanical machines in the hands of a highly-trained and skilled archer. The effective range of either weapon is really only limited by the ability of those bending their limbs.