What would you say if I told you that there’s a Western game bird that lives almost exclusively on easily... 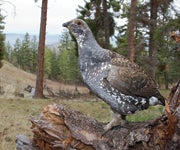 What would you say if I told you that there’s a Western game bird that lives almost exclusively on easily accessed public land, works well for both pointing and flushing dogs, and tastes better than pheasant? That bird exists–in abundance–and it’s called a blue grouse, which has officially been renamed the dusky grouse. Of course, there’s a catch: Although they live in national (read: public) forests, dusky grouse also live at high elevations. In practical terms, that means that no matter how far back in you drive before you begin your hunt, you’re still going to have to climb to find them. If your idea of exercise is channel surfing, you’ve got a painful surprise coming.

The good news is that if you find the right combination of habitats and elevations, it’s relatively easy to find the blues. Here are some habitat elements to keep in mind.

• Mature Forests: Stands of subalpine or Douglas fir tend to spread out and create open, lightly wooded glades. The glades draw sun-loving grasshoppers, which in turn draw hungry grouse. In September, dusky grouse may be spread out and feeding across 20 or 30 yards of gladed hillside, holding and flushing like single quail.

• Snowberry Shrubs: Their blueberry-size, snow-white berries are a grouse staple through the fall.

• South-Facing Slopes: Look for an open, patchy understory on primarily south-facing exposures. And pay special attention to low-growing rug juniper plants that encircle the base of mature fir trees like a wreath. Find them and you know you’re at just the right elevation for grouse.
**
Forgiving Flushers**
In September, most of the birds will be in family groups called broods. It’s not at all unusual to have a bird flush in front of your dog, and then a few seconds later, have two or three more pop up. It’s impossible to predict how many there will be, but it’s easy to guess where they’ll fly: downhill.

Despite their size and speed, blues are easy to kill. One-ounce loads of 6s are adequate in my spendy little 20-gauge Sterlingworth; when I’m shooting well (not something I’d suggest you bet the ranch on), they work beautifully.

By the first week of October, the broods begin to disperse, and I reluctantly move to the prairies and my beloved Huns and sharptails. But I’ll have a few blues in the freezer to remind me of the mountains, and memories of a game bird that so many hunters ignore.