Concealed carry practitioners have many options to choose from these days, and the list just got a little longer as... 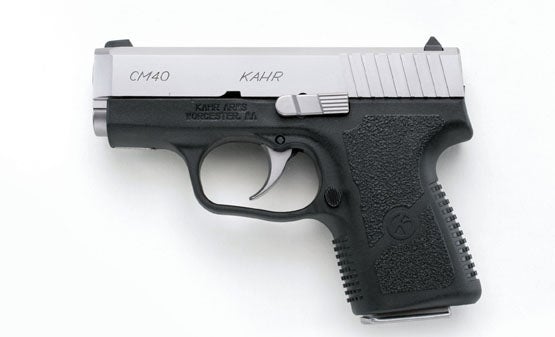 Concealed carry practitioners have many options to choose from these days, and the list just got a little longer as Kahr Arms recently added to its CM series of Kahr pistols with the CM40. This new model will start arriving to wholesalers and gun dealers in 2012.

The CM Series, which debuted in spring 2011 with the CM9, takes the value-priced features from Kahr’s CW series (a 3.6″ barreled pistol in 9 mm, .40 S&W or .45 ACP) and incorporates these features into a smaller 3″ barrel package, making it ideal for concealed carry by licensed civilians and law enforcement personnel.

The first offering in the CM40 line, the CM4043, is chambered in a .40 S&W caliber, has a 3.0″ barrel and an overall length of 5.47″, with a height of 4.0″. The pistol weighs in at 15.8 ounces plus 1.9 ounces for the stainless steel magazine. The CM4043 has a conventional rifled barrel, while the slide stop lever is metal-injection-molded instead of machined. Compared to other Kahr models, the CM series slide has fewer machining operations and uses simple engraved markings instead of roll marking.

The CM40 boasts real sights, which are drift adjustable in the rear, and a pinned-in polymer front sight featuring a white bar-dot configuration. The slide does lock back after firing the last round–a feature often missing on a number of other value-priced compact semi-auto pistols. It comes with one five-round magazine.