Turn your Remington 870 into a customized gobbler stopper 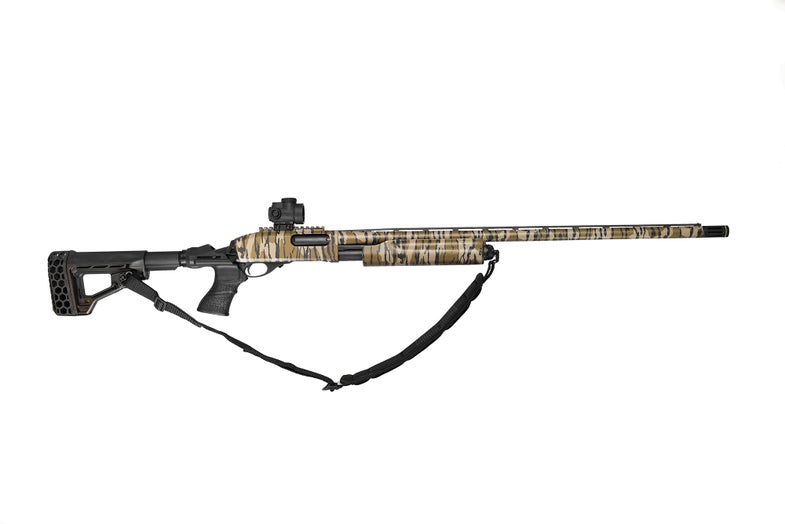 Sure, you can kill turkeys all day with any old shotgun that will hold a decent pattern at 30 yards. But where’s the fun in that? New loads and chokes specialized for turkey hunting have improved gobbler gun performance by leaps and bounds. So as a winter project, I wanted to take a bare-bones scattergun and turn it into a turkey-killing machine. To start, I went to my local gun store and bought a used Remington 870. Here’s what I did to modify it.

I chose the 870 Express because it’s widely available, super reliable, and, most important, it’s very easy to modify. I’m no gunsmith, so I wanted to work on a shotgun that had simple features and a limited amount of moving parts, plus one that was easy to disassemble and reassemble. The 870 is exactly that.

The first thing I did was swap out the standard stock for a Knoxx SpecOps Gen III stock by Blackhawk. The Knoxx SpecOps looks cool, and the pistol grip provides better maneuverability, making it easier to keep the gun on target for extended periods of time. It also has six adjustable length-of-pull positions, from 12.5 to 15.2 inches. But the main benefit of the new stock is that it eats up felt recoil. Its has two main features­—a spring system built into the frame and a thick, cellular butt pad—that are designed to work together to absorb the force of the shotgun as it recoils back into the shooter. Blackhawk claims it reduces felt recoil by 80 percent. After blowing through a couple of boxes of turkey loads, both my shoulder and cheek felt just fine. ($160; blackhawk.com)

The install: Installing a new stock on an 870 is very simple. First remove the two Phillips head screws that hold the butt pad in place. Take off the butt pad and you’ll find a hole through the center of the stock with a screw at the bottom that fastens it to the receiver. With an extra-long-shank screwdriver, undo this screw and the stock will come off. The Knoxx SpecOps comes with the required Allen wrenches—all you have to do is tighten one bolt where you removed the old screw to fasten the base of the stock to the receiver. Then slide the rest of the stock onto the base, tighten one more bolt, and you’re off to the races.

Most 870s have a trigger pull weight of somewhere between 4 and 6 pounds. This is not bad at all for shotgunning. But there was so much creep in my 870’s trigger that I knew I could do better. So, I picked up Timney Triggers’ 870 Fix Kit, which comes with three different color-coded sear springs and a sear. The kit isn’t an actual trigger group—it’s just a package to improve the existing trigger, which is exactly what I was looking for. Each spring offers a different pull weight: red/heavy/4 lb., white/medium/3 lb., and blue/light/2 lb. I opted for the medium white spring and now have a very crisp 3-pound trigger. ($98; timneytriggers.com)

The Install: Installing the new spring and sear was the most complicated job in this project. You’ve got to remove the trigger group, which is easy enough. But then you must also remove the carrier pivot tube, the carrier assembly, and the carrier dog follower from the trigger group. Then, of course, you must put it all back together properly with the new spring and sear. Timney includes a pretty good set of directions on how to do this, but my advice is to watch about an hour’s worth of YouTube tutorials before you even take the trigger group out. Then, keep the best video running as you get started.

I love red-dot (or reflex) sights on a turkey gun. Any veteran turkey hunter can tell you that most misses occur because the shooter pulls his head off the gun just as he’s pulling the trigger. A sight forces you to look through the sight picture, instead of pulling up early and looking over the bead. It also allows you to shoot accurately from awkward positions, where you might not have a perfect gun mount and cheek weld, like when a gobbler sneaks in from your right and you’ve got to twist your body and cant the gun to get on him.

With this in mind, I went with Trijicon’s reflex MRO (Miniature Rifle Optic), which was designed specifically for fast target acquisition from “non-standard shooting positions.” Trijicon promises five years of battery life if you leave the sight on continuously. If you happen to remember to turn it off, the lithium battery might last the duration of your turkey-hunting career. It’s made of aluminum, so it’s light (4.1 ounces) and compact. It has eight brightness settings (two are night-vision settings), and is waterproof down to 30 meters. Is this overkill for a turkey-hunting sight? Hell yes. ($579; trijicon.com)

The install: I had a local gunsmith drill and tap the 870’s receiver for a Picatinny rail. I got the gun back a week later, and it cost me $40.

I put a wrap over the gun to hide the dents and scratches made by the previous owner and to help weatherproof it. Mossy Oak’s Gun Skin is cast vinyl, waterproof, and guaranteed not to fade for at least seven years. But most important, it looks cool. I just had to go with the original Mossy Oak Bottomlands pattern. So long, laminated hardwood. ($30; [mossy oakgraphics.com](http://www.mossy/ oakgraphics.com))

The Install: Wrapping the gun isn’t that bad, but it takes time and patience. You’ll need an X-Acto knife and a blow-dryer. The kit comes with individual pieces for the barrel, forend, receiver, and stock. Stick a wrap on its designated gun part, being careful to avoid wrinkles and bubbles. Trim away excess material with your knife. Then, use the blow-dryer to heat the wrap and pull it tight. As you heat the vinyl, it becomes more flexible and works into groves and around bends. Press out any wrinkles or air pockets (there will be some) with your fingers while applying heat.

With this sort of performance, I can ethically kill gobblers out to 50 yards, which is as far as I’d ever want to shoot at a turkey anyway. The gun fits me nicely and its looks will turn some heads at turkey camp. Shooting through the reflex sight is flat-out fun. The stock reduces felt recoil, so shooting before the season and getting dialed in won’t be so much of a pain. It’s still a used 870 Express—the modifications haven’t added elegance—but that’s even more reason to like it. Gobblers beware.