Does Sealing the Primers on Your Handloads Make Sense?

Do you fret that when Mr. Big Buck arrives, the handloaded cartridge in your rifle will be a dud because... 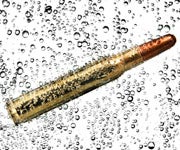 Do you fret that when Mr. Big Buck arrives, the handloaded cartridge in your rifle will be a dud because moisture seeped into the case and killed the primer? Such a nightmare scenario kept me staring at dark walls to the point where I conducted a test to determine if it was necessary to seal primers against moisture.

The Test: I seated Winchester Large Rifle primers in five .30/06 cases that had been fired once and had tight primer pockets, five cases with slightly enlarged primer pockets from being reloaded numerous times, and five cases with tight pockets whose primers I sealed with a dab of fingernail polish around their circumference. I soaked the heads of the 15 loaded cartridges for a half hour in water. I then stood the cartridges bullet-down for a day to give any water that had seeped between the primer and primer pocket wall a chance to reach the priming mixture.
The Results: The following day I fired the three batches of .30/06 cartridges through a Rock Island 1903 rifle. All 15 cartridges fired without a hitch. In fact, all the bullets grouped in slightly over 3 inches at 100 yards. That’s pretty good for an old rifle with an aperture sight.

Conclusion: There’s no need to seal primers against moisture.