A huge trophy buck steps out at the end of a soybean field, 314 yards away according to your rangefinder.... 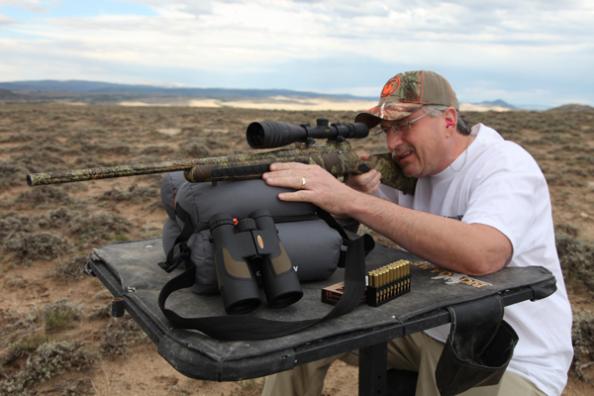 A huge trophy buck steps out at the end of a soybean field, 314 yards away according to your rangefinder. He’s a monster–but the shot’s a real far poke. Are you up to the job? You don’t have to be a Navy SEAL sniper to make a 300-yard shot on a deer-sized target, says Tiger McKee.

McKee’s a tactical rifle trainer, owner of the Shootrite Firearms Academy, and author of The Book of Two Guns, a training manual for the AR-15 rifle and the 1911 handgun. But, he adds, you need to prepare for that shot, well before your chance at the Boone & Crockett record book appears. Here’s how to do it.

“I see a lot of guys put up a paper plate at 100 yards and fire off a few rounds,” says McKee. “If they hit it? They think they’re good to go. But they’re not.” Let’s say you hit near the top of the paper plate at 100 yards. You aimed for the center, so that puts you three-plus inches off. At 300 yards? “That’s a complete miss,” says McKee. Get to the range, and get as tight a group as you can.

2. Consider zeroing in your rifle at 200 yards

Most hunters zero in their rifles at 100 yards. But, says McKee, with a .308 rifle firing a Federal Match round with a 168 grain bullet, for example, and zeroed at 100 yards, you will have to hold over about 16 inches on your big buck standing 300 yards away–probably way over his back. With a 200 yard zero, same scenario, your hold over is only nine to ten inches. Easier shot, as you (probably) aren’t holding over your crosshairs into thin air! Note, though: with a 200 yards zero, same .308 round, your bullet will impact about two inches high at 100 yards.

At the shooting range, practice hitting targets out to 300 yards (or whatever distance you are comfortable with shooting at). You’re probably firing from a table or the prone position. That’s fine for starters. But there are no tables in the field, and few opportunities to take a prone shot. So, once you and the rifle can do the job at distance, now practice shooting from the kneeling position, with shooting sticks, and by using items like tree trunks to brace and support your rifle. Try to replicate field shots as much as possible

4. Find the ammunition that works best––and stick with it

“We’ll have guys at Shootrite who are punching one-inch groups or better at 100 and 200 yards, all day long. The next day, their shots suddenly jump three inches high and several inches right or left. Why? They switched ammo.” Ammunitions made by different manufacturers will have different trajectories, says McKee, even if they are the same bullet weight and rated at more or less the same muzzle velocities. If you’re dead on with one brand of ammo at 100 yards, and then next brand kicks you over three inches, that means you will be off nine to ten inches off at 300 yards with this second ammo.

5. Don’t go cheap on the scope base and rings

It will cost a little more, but quality rings and bases are a must. McKee sees it all the time: a guy has a $1,200 rifle topped with a $900 optic, and the two are joined with a $20 scope-base-and-rings kit. “That rig isn’t going to hold up the way it needs to,” says McKee. “The recoil itself can wreck your zero. And the first time your scope gets bumped? You’re missing!”