Until recently, the field of dedicated dangerous-game rifles was pretty narrow. Classic British doubles have always been in demand, even... 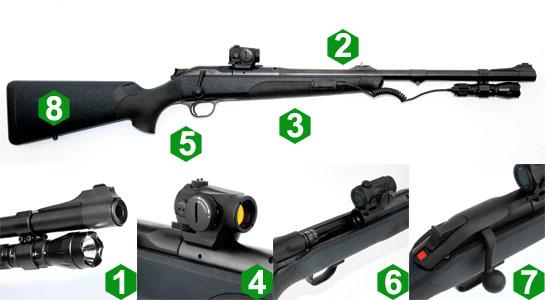 Until recently, the field of dedicated dangerous-game rifles was pretty narrow. Classic British doubles have always been in demand, even when they weren’t in production, and their prices were (and are) extremely high. The only other option was a bolt-action, but even the best hand with a bolt rifle couldn’t match the second-shot speed of a double.

On a recent hunt with Namibian PH Cornie Coetzee, I was impressed by the rig he carried–a gun that serves as his last line of defense against elephants, buffalo, leopards, and lions. Part high-tech bolt gun, part tactical rifle, Cornie’s Blaser updates the concept of the dangerous-game gun.

The Rifle: It’s a Blaser R8 Professional with a synthetic stock. The rifle’s straight-pull sliding bolt head allows for faster cycling than a traditional bolt, and a camming system locks the bolt closed when firing. Plus, the rifle is 2 to 3 inches shorter than bolt guns with barrels of the same length, which means it is more maneuverable in the thick stuff. The R8 Professional is available with either a steel or an alloy receiver. The alloy receiver works fine with .375 H&H and .416 Rem. Mag. versions, but when stepping up to the .458 Win. Mag., .458 Lott, or .500 Jeffery, stick with the heavier steel receiver to reduce recoil. ($7,304 with steel receiver, $4,685 in alloy; blaser-usa.com)

1. The Light: Following up wounded game often occurs in low light or complete darkness. Having a hands-free optic is essential for casing wounded game in low light, and TacStar’s Weapon Light System 2000 allows the shooter to mount the company’s 150-lumen T6 light to the underside of the barrel for illumination in heavy cover. ($105; **tacstar.com)

2. The Sights:** Professional hunters like good-quality iron sights, and New England Custom Guns offers a special “See-Thru” fiber-optic sight that is skeletonized so it doesn’t obscure the lower portion of the sight picture. ($80; new englandcustomgun.com)

3. The Stock: Beautiful walnut is eye-catching, but wood can warp and split. Synthetic stocks hold up better and are impervious to thorns, water, and bad baggage handlers.

4. The Optic: Aimpoint’s Micro H-1 red-dot sight allows for rapid target acquisition in low light. The rifle’s saddle mounts allow for quick removal, so that the shooter can use auxiliary iron sights. ($927; aimpoint.com)

5. The Trigger: Hemingway hated the trigger on his fine double so much that he preferred to use his .30/06 on everything up to buffalo and rhino. The days of poor triggers on dangerous-game rifles are coming to an end, and the Blaser breaks cleanly at 3 pounds.

6. The Magazine: The Blaser comes with a detachable box magazine. Many hunters fear that DBMs will fall out at an inopportune time–like when they are being chased by something very big and very dangerous. The Blaser magazine, however, has a dual locking system that virtually eliminates dropped magazines. The system also allows for blind magazine exchanges. The magazine can be loaded through the breech if required.

7. The Safety: Traditional safeties still mean carrying a cocked rifle. But the Blaser’s safety is also a decocker, which means the rifle can be carried with an extra measure of assurance against unwanted discharge.

8. The Recoil: Dangerous-game guns produce heavy recoil, and heavy recoil slows follow-up shots. To reduce this, Blaser has developed a recoil reduction system known as Kickstop, which utilizes a stainless steel cylinder filled with tungsten powder in the stock to reduce recoil up to 20 percent.

The Cartridge: When the late Jack Lott was tossed by a buffalo while hunting with a .375 H&H, he decided he needed something bigger. Jack decided that he would design his own cartridge, so he necked up the .375 to accept .458-inch bullets. The resulting cartridge became the .458 Lott, which drives a 500-grain bullet at 2,300 fps, generates almost 3 tons of muzzle energy, and is powerful enough to kill anything that might want to kill you.

Blaser R8 Tested By Fire
Cornie Coetzee’s client had just made a bad shot on a lion. The light was too poor for a follow-up, so after a restless night Cornie, his assistant PH, and his fox terrier set out to track the lion’s spoor. It wasn’t long before the stillness of morning was broken by a series of short grunts as the lion came for the men, tail thrashing, rushing low and fast from a nest of mopane. Cornie lowered himself, centered the sights of his Blaser on the lion’s open mouth, and squeezed the trigger. Over the muzzle, Cornie saw the cat fold, somersaulting and landing just ahead of Cornie’s feet. With a jerk of the bolt, Cornie fired again for insurance. Despite a poorly placed first shot, the client had his lion.