Is this new load the fastest 6.5mm cartridge ever? 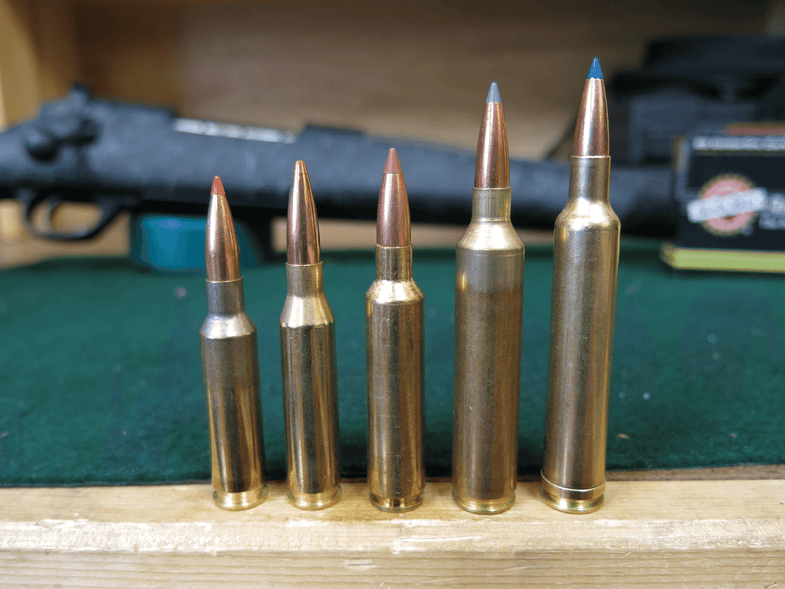 There’s a new sheriff in town. Weatherby, for the first time in decades, is unleashing a new cartridge—and it is a speed-demon of a six-five. Based on a necked-down .300 Weatherby Magnum, the 6.5-300 Weatherby is like a mini ICBM and is set to dethrone the 26 Nosler as the fastest commercial 6.5mm cartridge available.

I was lucky enough to get my hands on the first 6.5-300 rifle to be sent outside Weatherby’s headquarters in Paso Robles, Calif., a Mark V AccuMark, along with a couple boxes of handloaded ammunition. I’ve had some good range time with it and I’m preparing to take it hunting in the next few days. Production rifles and ammunition will be shipping in 2016. 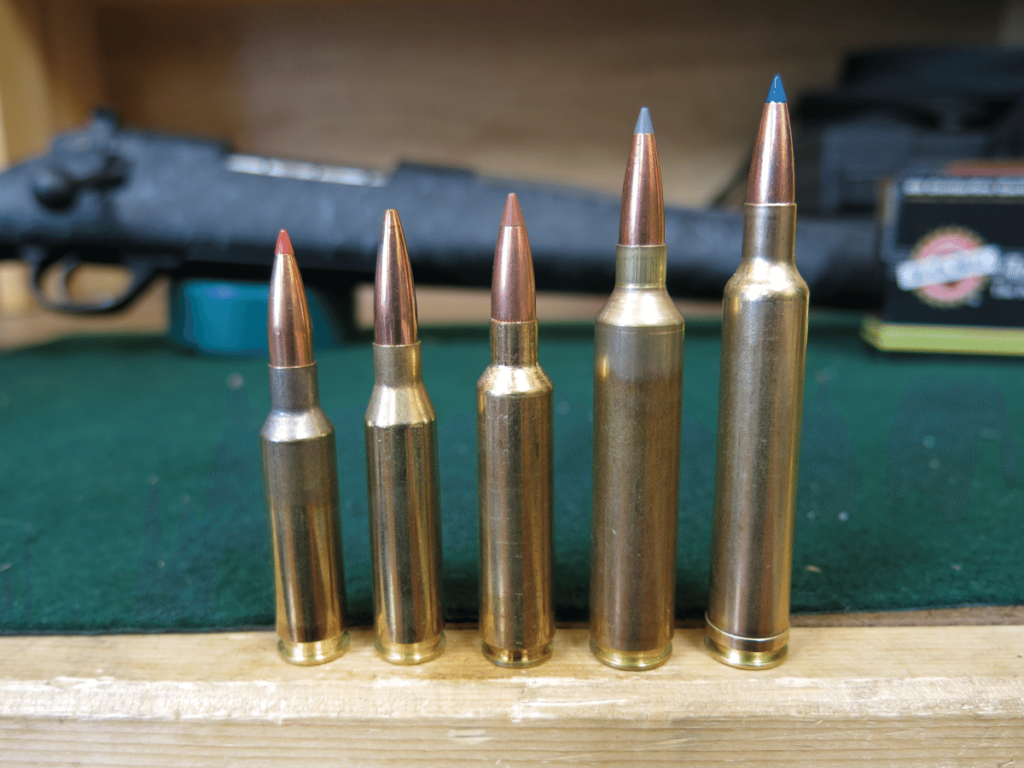 6.5-300 Wby. Specs
First things first. Here are the details from Weatherby on the cartridge. It will be offered with the following bullets:

Initially, Weatherby will make three different rifles in the 6.5-300, all based on the Mark V action: the Accumark, the Accumark RC, and Ultra Lightweight. (The RC stands for Range Certified, meaning those rifles have been shot at the factory and come with a certified sub-MOA target.) All the rifles will have 26-inch barrels, though the Ultra Lightweight will also have a 2-inch muzzlebreak tacked on. The barrels, which Weatherby says are all hand-lapped, will have 1-in-8-inch twists.

The first 6.5-300 rifle to be sent outside Weatherby’s headquarters in Paso Robles, Calif., a Mark V AccuMark,

Hotrod Rifle
Roy Weatherby made his mark by designing cartridges that were fast and building rifles for them that were accurate and flashy. His rifles had bling and swagger at a time when the round receiver of a Remington 700 was enough to raise eyebrows for its outré design. His Hollywood aesthetic, and sense of showmanship, was echoed in the hotrod car culture that also flourished in Southern California in the 1950s.

This new Accumark is a direct heir to Roy’s early creations. The highly polished stainless steel barrel is offset with matte black in the fluting and around the recessed crown in the muzzle.

It’s shine and gloss will make some hunters grumble that it might alert sharp-eyed game while stalking, but like the cartridge, this rifle is making a statement saying that it will not be ignored.

There will also be a lot of grumbling about the cartridge—which is admittedly an over-bored sonofabitch—that it’s going to be a barrel burner and that it doesn’t have a “point.”

To which I say, get over it. To extend the car metaphor, it’s like a gaggle of Prius owners tsk-tsking muscle cars enthusiasts. “Do they have any idea how much fuel they waste?” Go home, Mildred.

One doesn’t get a rifle that pushes a 127-grain bullet in excess of 3,500 fps because he’s concerned about barrel life. You do that because you like bullets that haul ass and shoot flat. 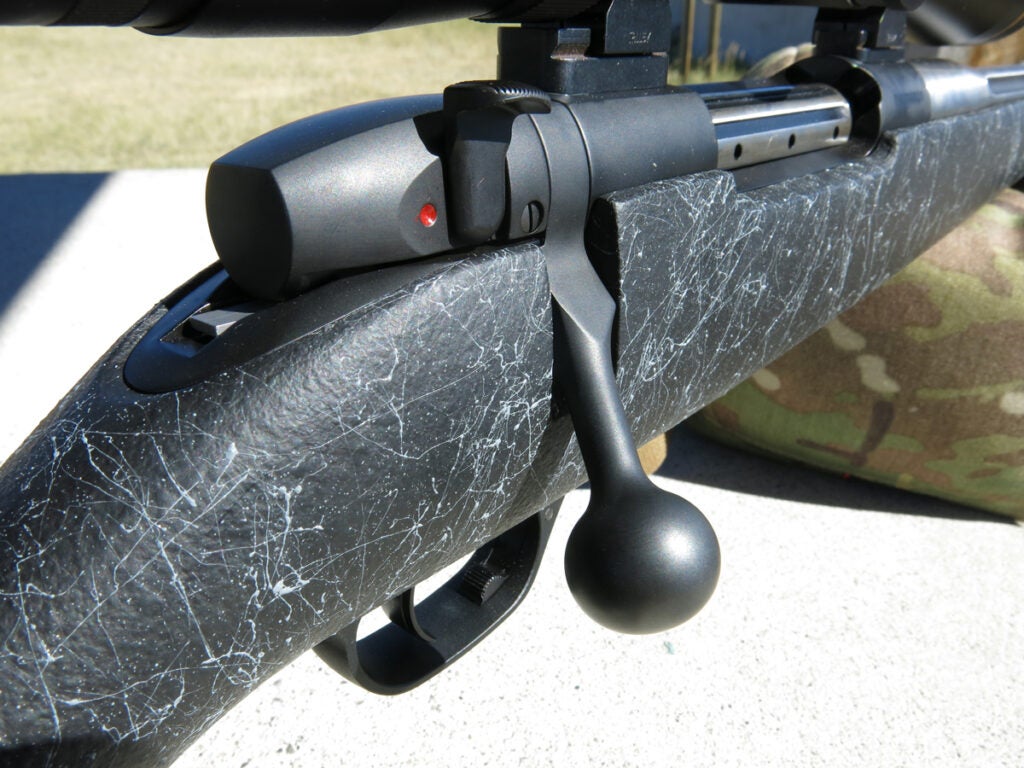 The bolt handle on the new Accumark.

Nothing New?
Now, to be fair, this cartridge isn’t exactly new. According to Dean Rumbaugh, Weatherby’s in-house historian who has been with the company since 1961, Roy Weatherby built a 6.5-300 at some point in the early 1950s. They still have the old Mauser-action rifle in their collection. There is also evidence that Weatherby built a 6.5-300 Weatherby for Herb Klein, a benefactor of Roy’s who helped keep the company afloat during financially troubled times. But where that rifle is today is anyone’s guess, Rumbaugh says.

Curiously, however, there is no other documentation concerning Roy’s early work with this cartridge that has been unearthed in the Weatherby archives, Rumbaugh says. It is a sort of black-hole among the calibers.

Part of the reason for this could be that Roy dismissed the idea of bringing it to market fairly early on. Between the success of the .257 Weatherby at one end of the spectrum, and the .300 Weatherby at the other (with the mildly successful 7mm Weatherby splitting the difference), there wasn’t much reason to unveil a 6.5mm cartridge given the marginal performance gains that would be seen due to the quality of bullets, powders and primers of that era.

Not everyone shared, that assessment, though. In the early 1970s, a group of wildcatters who were affiliated with the legendary Pennsylvania 1000-yard benchrest club, built rifles chambered for a 6.5mm cartridge using the .300 Weatherby as the parent case. Called the 6.5-300 WWH, for Weatherby Wright Hoyer, it won matches and had a devoted niche following among that influential group of shooters. 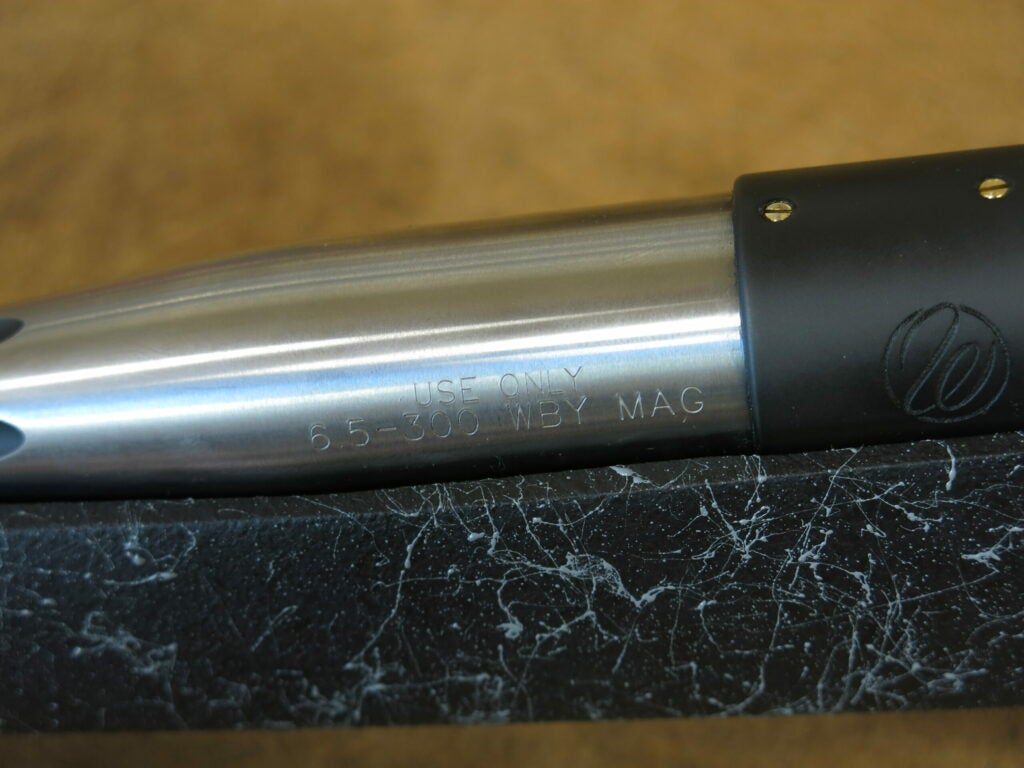 Detail of the make and caliber.

King of the Hill
Whatever issues there might have been with the components available in those early days, Weatherby believes that today the time is right for the 6.5-300 Weatherby Magnum to be introduced (or reintroduced, as the case may be) to the broader shooting world.

Given the feverish interest among shooters with all things long range, as well as the bragging rights that come with having the fastest gun around, and the current ascendency of cartridges using 6.5mm bullets, I’m willing to bet that Weatherby’s gamble will pay off.

I must say that shooting the lighter 127-grain bullets has been surprisingly comfortable off the bench. The weight of my rifle (8 pounds 3 ounces) makes it a solid medium-heavyweight and helps soak up the 6.5-300’s felt recoil. The well-shaped stock helps in this regard too.

The accuracy so far has been good as well, hovering right around 1 MOA. I’m looking forward to reloading the round with a variety of long and sleek 6.5mm bullets to see exactly what the cartridge can do—but I suspect the answer is a lot.

Even though the cartridge gobbles powder by the handful and will run through brass at a brisk rate, it is a round that can handle just about any type of hunting. It’ll certainly take large game at extended ranges and will make for an excellent predator round, assuming that saving the animal’s pelt isn’t a primary concern. It would be fun as hell to use on hogs, and, with monolithic bullets will easily crumple elk, moose and other large critters.

But beyond its utility—or lack thereof—this cartridge is pure Weatherby. It’s speed and eye-popping ballistics are in keeping with Weatherby’s DNA. From his perch in the gamefields on high, I’m sure that Roy Weatherby is smiling.