The Houston Astros are such a pathetic Major League Baseball franchise that they’ve been dispatched to the American League beginning... 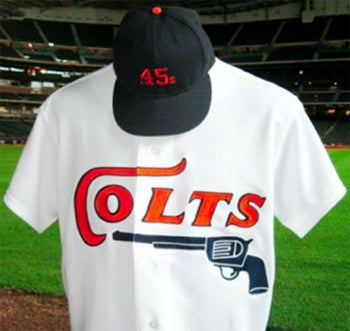 The Houston Astros are such a pathetic Major League Baseball franchise that they’ve been dispatched to the American League beginning in 2013 after toiling in the National League since they were founded 50 years ago as the Houston Colt .45s.

To “celebrate” their last year in the senior circuit, the ‘Stros plan to play several games this season in replicas of the Colt .45 uniforms the team wore 1962-64.

This insult to injury spurred Houston Astros fans to rally behind new owner Jim Crane, who demanded that MLB relax the policy, or whatever it was, in a concession to common sense. After all, the Colt .45 Peacemaker is “the gun that helped win the West” and is a symbol Houstonians — and many Americans — are proud of.

And, so, while the Houston Astros may, again, finish last in the National League Central, they’re first in MLB when it comes to sticking to their guns.

Astros to wear replica Colt .45s uniforms twice in April, gun and all

For once, MLB gets something right, allows Houston to keep pistol on Colt 45s throwbacks