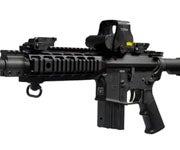 ArmaLite Inc. introduces a “California compliant” rifle: the SPR Mod 1 Carbine in .223/5.56 NATO. As an ArmaLite press release notes, “Golden State hunters and competitive shooters can now enjoy what the rest of Americans can: a true and complete ArmaLite!”

The SPR Mod 1 is not a “complete” ArmaLite in the sense that it needed minor alterations, thanks to California’s “Assault Weapons” law. Among other things, that law banned semi-automatic centerfire rifles with detachable magazines. So to make the rifle legal in California, the SPR Mod 1 comes with a built-in “bullet button” magazine release.

Instead, you have to insert a pointed object into the bullet button device (pictured) before you can release the magazine. As the name implies, the end of a bullet generally suffices.

The SPR Mod 1 is 35.3 inches long with stock extended, and approximately 32 inches with the stock collapsed. The rifle weighs approximately 6.5 pounds. One 10-round magazine (in California, new magazines must hold 10 rounds or less), a sling, a black case, owner’s manual and a limited lifetime warranty are also included. As a side note, the gun does not come with the sight shown in the photo.