The Mossberg MVP is a bolt-action varminter that runs with AR magazines. 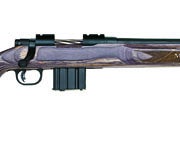 Mossberg’s new MVP rifle is an easy gun to like. It’s a bolt-action chambered in 5.56 NATO/.223 Rem. that has the makings of a good all-around varminter. There’s nothing particularly fancy in its construction, but the designers at Mossberg didn’t overlook any critical features either. The result is a very workable firearm that does what it should without any fanfare or pretention. It is like a Lab rescued from a shelter who clearly has a bit of something else in his bloodline–but he hunts hard, is a great companion, and came at a great price.

Magazine Versatility
The cleverest feature on the MVP is an action that is fed by AR-style magazines. The rifle ships with a 10-round metal magazine, which is probably the best size for the platform. Though if you have a pile of 30-rounders lying about and you don’t run into clearance issues with your benchrest or bipod, then knock yourself out. The beauty of this is that you can head to the range or prairie dog patch with a batch of pre-loaded mags, and while your buddy is fumbling to reload his varmint gun, you can keep picking off ground squirrels as fast as you can run the bolt.

While the 10-rounder that came with the MVP worked great in my sample, I did have an issue with some other mags I used. A 20-round Magpul PMag, for instance, wouldn’t engage the magazine catch securely and would occasionally drop loose from the mag well.

Modified Bolt Head
To get the MVP to feed with AR magazines, Mossberg designed the bolt head with a tab that flips down to catch the rim of the next round in the mag and strip it out from between the magazine’s retaining lips. The spring-loaded tab juts down about 1/8 inch once the bolt head clears the raceway at the back of the receiver. The first time I saw the seemingly delicate bit of metal, I was worried it would snap off or otherwise malfunction after some hard use. In this case, its looks were deceiving. It ran without a hitch, even after deliberately rough treatment. I didn’t experience a single feeding problem during the evaluation. Loading single rounds on top of the empty magazine worked just fine, as well.

The magazine release on the MVP is located in a recess on the front side of the mag well, and while at first it feels like you’re pushing the tab straight to the rear, the tab is actually a pivot that levers the catch out of the side of the magazine, in keeping with the AR magazine design. This simple workaround is another clever touch on the MVP.

There is a significant amount of slop and play with the bolt when it is pulled all the way to the rear–the MVP isn’t built or billed as a slick custom gun–but I didn’t experience bolt binding under any circumstances. The spiral fluting on the bolt body, which is a nice aesthetic touch on the MVP but also reduces friction, surely deserves some credit here.

Adjustable Trigger
The MVP employs Mossberg’s user-adjustable LBA (Lightning Bolt Action) trigger. A single screw on the trigger housing is accessible once the action is removed from the stock. It can change the weight of the trigger pull from about 2 to 7 pounds. I set my sample at 2½ pounds and never looked back.

The crisp trigger break on the LBA is a pleasure to experience and has been a major step forward in the performance of Mossberg’s overall lineup since it was introduced a couple of years ago.

All the exterior metal work on the MVP is coated in a corrosion-resistant matte black, which helps reduce the possibility of glint and shine giving away your position to a wary coyote, plus it looks good paired with the gray laminate stock.

Mossberg classifies the barrel as a “medium bull,” which is as accurate a description as any, I suppose. It is 24 inches in length and tapers gradually, ending in a diameter of .750 inches at the crown. The barrel is adorned with some light fluting that is more decorative than practical, as the flutes are too shallow either to affect barrel cooling or to make a substantial difference in the rifle’s weight. Barrel heating didn’t seem to be an issue with the MVP in any event, even with prolonged strings of rapid fire, though the temperatures at the range on the days I shot only got up to the mid 40s.

Excellent Accuracy
The twist rate on the MVP is 1:9, which did a good job of stabilizing all the bullet weights I put through the rifle, even Winchester’s 35-grain lead-free ballistic tip, which is a persnickety load that few .223 rifles seem to shoot well.

The MVP showed a distinct preference for Hornady’s 75-grain BTHP Match ammo, turning in three sub-MOA groups with this, the smallest of which printed an impressive .395-inch cluster. The average of all of the five-shot groups during the evaluation was 1.130 inches.

Portable Package
One surprising thing about the rifle is its weight. The profile of the stock is substantial. The wide beavertail forend, the deep vertical grip, and the broad butt give the impression of significant heft. The butt is actually quite narrow, however, and the rifle weighs a moderate 7½ pounds unscoped. It doesn’t have the lines of a walking varminter, but it could serve in that role extremely well, though ideally the rifle should come with one extra swivel stud up front so you could attach a bipod as well as a sling.

The ergonomics of the stock are excellent. The grip features a slight swell that works well for right-handers, and along the comb Mossberg added some width to the wood, which makes for a comfortable cheek weld. The laser-cut texture on the forend and grip show off a Mossberg “M” and keep the stock from getting slippery in hand.

The MVP delivers accuracy, comfort, and solid design for an excellent price and sets a new benchmark for Mossberg’s centerfire rifles.

Verdict
After years of mixed success in the bolt-action market, Mossberg delivers a clear win with the MVP for varmint hunters and target shooters.