Former member of the U.S. Olympic Shooting team, Allen Treadwell of Seligman, Missouri felt he could use the time he... 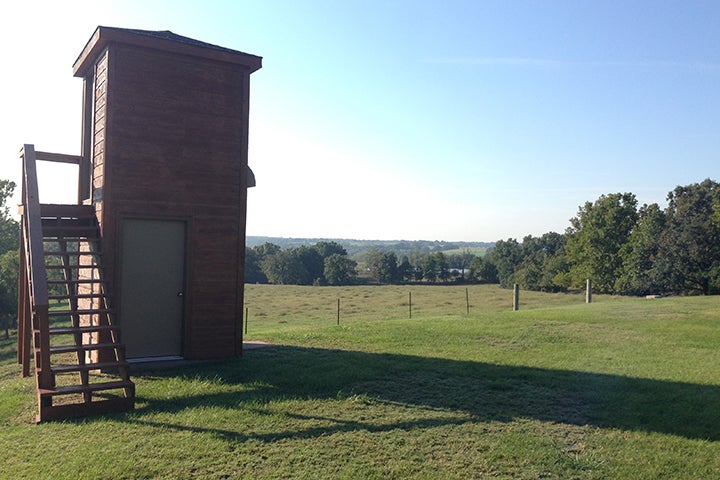 Former member of the U.S. Olympic Shooting team, Allen Treadwell of Seligman, Missouri felt he could use the time he spent commuting each day to a practice field more wisely, building an Olympic size skeet range in his own backyard was the answer. Watch as Allen gives Mark Wills an inside look at his “extreme” backyard and how to master the art of precision while skeet shooting.

Allen Treadwell grew up in the Missouri Ozarks where hunting and fishing is the chosen lifestyle for most residents of the area. As an early teen, Allen began competing and winning locally in all kinds of shooting but his shotgun talent soon outpaced the others. He earned a spot on the All-American team in sporting clays, achieving the master class level (the highest class possible) at 16-yrs of age and was invited to try out for the Jr. Olympic Team. Allen’s success in International Skeet is nothing short of phenomenal with a 3-time National record holder, 3-time World Championship Team member, 10-time World Cup team member, and the 2004 Olympic Team alternate. This laid-back country boy has literally shot his way around the world in addition to hundreds of ranges in North America. He broke clays in China, Germany, Italy, Egypt, Finland, Croatia, Australia, Spain, Brazil, and the Dominican Republic. Treadwell now serves on the Bass Pro Shops/Redhead pro staff and co-hosts television shows for both Bass Pro Shops and Winchester.

Trap shooting began in the US around 1825, with the first recorded match being held in Cincinnati, OH six years later. Americans then began developing artificial targets for competitions; first came glass balls filled with feathers followed by the standard clay targets. In an attempt to simulate shooting upland game and improve hunting techniques, skeet shooting originated between 1910 and 1915.

Originally using 12 shooting stations and one trap, the format was modified to the present day half-circle format, with targets thrown from high and low houses on either side of the field. Skeet became an Olympic sport for men and women in 1968 and the teams began training year round in 1979. The number of Olympic shooting events has fluctuated over time, ranging from two to 21. Since the 2008 Beijing Olympics the shooting program has included 15 events: six for women and nine for men. During Olympic style competitions men shoot 125 targets and the women shoot 75.

SHOOTING FOR THE STARS: Building a Backyard Skeet Field

In the shooting sport of skeet, success is measured in hundredths of seconds and fractions of inches as shotgunners take pokes at clay targets speeding at close- range and crossing from high and low- angles.

Allen Treadwell of rural Seligman, Missouri, became a skeet-shooting champion through practice … thanks to an extreme backyarding skeet field.

“My dad and I did the bulk of the construction ourselves,” says Treadwell. “There’s not much ‘flat’ in the Ozarks,” he laughs, “so we had a bulldozer come in and do the initial grading out back of the house.”

“I called the International Olympic Committee and identified all the specifications,” says Treadwell. “My range is accurate to every competition course in the world – Perth, Cairo, you name it — right down to the millimeter.”

A skeet field has 7 shooting positions on a semicircle with a radius of 21 yards, and an eighth position halfway between stations 1 and 7.

“If my skeet field was off by a fraction of a degree,” Treadwell explains, “there’s no way I could have performed to my highest level. That accuracy is essential for effective training.”

“We mixed our own cement in a 30-gallon mixer,” he explains. “Built forms, poured and troweled it all ourselves. When you’re a farmer, you just figure out the job and do it.”

Same goes for the skeet houses, which the Treadwells finished after a framing crew put up the basic structures. “We did have Promatic come in and help us with the traps,” Treadwell adds. “They need to be calibrated just right.”

While he doesn’t shoot competitively at the international level any more, Treadwell still loves his backyard skeet field, and shoots often for recreation. “I also do a lot of coaching now,” he says. “Shooting’s for everybody. We spend a lot of time out there. It’s how I can give back to the sport that has been so good to me.”