The tactical shotgun is perhaps the least understood firearm used for defense or competition. The skills and techniques employed for... 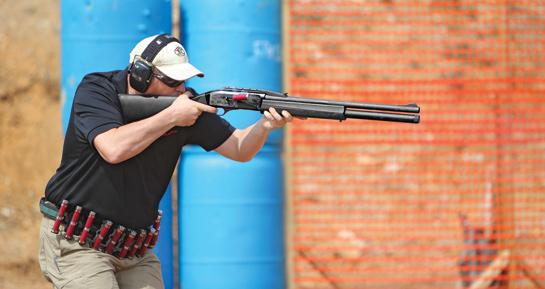 The tactical shotgun is perhaps the least understood firearm used for defense or competition. The skills and techniques employed for shooting a rifle or handgun are extremely similar, and for most shooters it’s easy to learn one if you have mastered the other. But the shotgun requires a much different technique.

There are two approaches. One is to shoot purely from a tactical aspect, using sights for every shot. But that limits what you can do and how fast you can do it. The other aspect is to learn to shoot a shotgun the way it is designed to be shot. That is, to learn wingshooting techniques and apply them to tactical shooting.

Tactical shotgun shooting for competition or defense is a multifaceted thing. But the bottom line is that the better and faster you can shoot it, the higher the odds are for victory.

Go Get Laughed At

Bring your tactical shotgun to the local five-stand, sporting clays, trap, or skeet range–preferably all of the above at some point. Be prepared for the wingshooting snobs who lurk about in these places looking to make snide comments. Resist the urge to pound them and instead seek out the shooters without self-esteem problems. Those guys can teach you their sport. Don’t expect to win any matches with a tactical shotgun, but do expect to build shooting skills.

What the shotgun guys do well is hit small, rapidly moving targets with a shotgun. If they can teach you to do that, you will be a better, faster tactical shotgun shooter. A flurry shoot, with lots of birds in the air at the same time, will build your loading skills.

Sight In Your Shotgun

It is important to have the patterns centered when you are shooting. This is usually a function of gun fit, but in a tactical shotgun, you’re often using slugs, so it’s best to aim the shotgun like a rifle.

For precision slug shooting, it’s critical that you zero the gun. It doesn’t matter if you have sights or just a bead–make sure everything is adjusted so the slugs hit where you want them to hit. Either install some adjustable sights or bend the barrel, but get the slugs hitting where you are aiming.

Spend Time With a Pattern Board

Do not assume anything when it comes to chokes and buckshot. The only way to know how your gun is patterning is to shoot it. You might be surprised at what you find. With buckshot, choke is everything. Sometimes just a few thousandths of constriction is the difference between a blown-out, wild pattern and a tight, controlled one.

The main challenge with a tactical shotgun is loading it quickly. While rifles and handguns have large-capacity magazines that can be replaced in the blink of an eye, the shotgun holds just a few rounds and must be reloaded one shotshell at a time.

There are several loading techniques that are taught for tactical shotgun shooting, and every instructor thinks his is the best. Find one or more that work for you and practice them often.