You can make a persuasive argument that John Mauser perfected the bolt-action rifle more than 100 years ago and that... 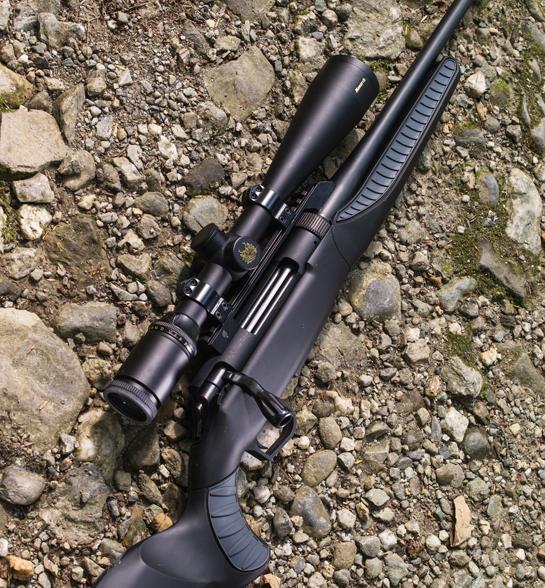 You can make a persuasive argument that John Mauser perfected the bolt-action rifle more than 100 years ago and that everything gunmakers have done since then has been at best superfluous or, less charitably, has royally screwed up a good thing.

Sure enough, there are plenty of manufacturers out there that don’t stray too far from his design, and we can thank them for giving us some lovely guns to own and shoot.

Thompson/Center is not one of those companies.

In an era when repeaters reigned supreme, T/C gambled on break-action single shots that allowed the user to easily swap barrels, and they won big. The T/C Contender, which debuted in 1967, developed a loyal cadre of followers who swear by its versatility, accuracy, and flexibility in accepting new cartridges.

In 2007, T/C got into bolt-action guns with the Icon, an interesting and accurate three-lug action with many virtues, and a couple of vices, that also strayed from the tried-and-true.
**
Breaking New Ground**
This year, the company rolled out its most audacious firearm yet–the switch-barrel Dimension. Like the Icon, it is a three-lug turn-bolt rifle fed by a single-stack magazine. And like the Contender, the Dimension can employ different barrels and shoot a variety of calibers.

Visually, the Dimension is in a class by itself. Between the hogged-out channel around the forend–to accommodate different-size barrels–the humpback comb, and the large gear-toothed barrel nut that joins the barrel to the action, the Dimension resembles no other bolt gun out there. Gripped by the barrel, it looks like something made for taking the head off an orc.

A Good Kind of Strange
The out-there design–love it or hate it–does confer good ergonomics, however. The Dimension is comfortable to shoot and didn’t punish my cheek with excessive felt recoil, which was a concern when I first saw the banana-shaped stock. Unfortunately, the hump on the comb is so aggressive that freeing the bolt from the action is a bit of a trick, and unless you’re particularly dexterous, you’re likely to mar the stock, as I did with my test sample.

The first time I tried to switch barrels I broke the tool that tightens the barrel nut, somehow shearing a pin in the wrench’s torque mechanism. I freely admit this was my fault and that I only skimmed the user manual beforehand–but that I was able to do this with such a critical component isn’t a good sign. So, instead of being able to torque the rifle to the exact amount built into the hand tool, I used large-jawed pliers to screw the barrel on and off.

Accurate With Any Caliber
The good news is that the Dimension shot well despite this setback. With the .308 barrel, the average group size was 1.249 inches with five different loads; with the .223 barrel on, it shot .899-inch five-shot groups on average. T/C is obviously making good barrels here. The nice trigger (which is user-adjustable) and solid bedding system also helped with the rifle’s accuracy.

Currently, the Dimension is offered with four different-size bolts, accommodating 10 different cartridges, from .204 Ruger up to .300 Win. Mag. The base price for a .308 is $679, making the Dimension an excellent value absent the barrel-switching capability. Extra barrels (which all come with a magazine adapter) are $199 each, while a new bolt for switching to a different class of cartridge is $162. T/C plans to offer more calibers soon.

Is the Dimension a perfect rifle? No, but it runs well, is accurate, and offers a hunter an affordable way to shoot a variety of calibers. We also have to credit T/C for being willing to push the boundaries of rifle design. Life is too short for boring guns, and T/C seems to have taken that to heart with yet another interesting, innovative firearm.