A dangerous-game rifle has two missions, the first of which is pretty simple: never fail. Plenty of rifles seem to... 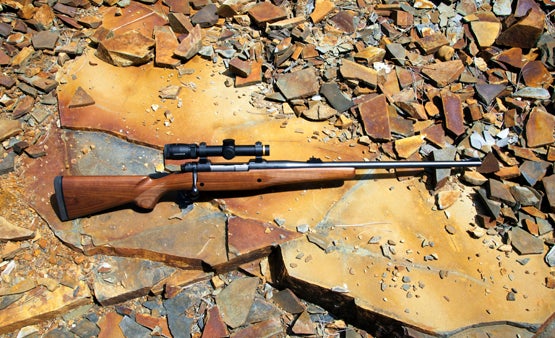 A dangerous-game rifle has two missions, the first of which is pretty simple: never fail. Plenty of rifles seem to live up to this standard. You might even have one or two tucked away in your gun safe right now, like that favorite bolt-gun that’s never let you down, either in the field or at the range. Every time you load it and pull the trigger, it goes bang. Come to think of it, pretty much all your rifles do this, no?

I’ll guess they’ve operated this way under comparatively posh conditions. Further, I’ll wager you’ve never actually tried to make your rifles seize up and quit. Why would you? It’s not like we have reason to expect a hippo charge on the morning walk to the deer stand.

And yet, it can be a revealing exercise to attempt to induce failure in a rifle, especially if you get creative about the torture test. Approach it with the devious mindset you had when you used to pick on your little brother and, believe me, you’ll see your rifle come up short.

**Boot Camp **
This was the first order of business with the new Montana Rifle Company DGR. I did everything I could to make it jam, stick, misfeed, or otherwise malfunction, treating it like a Marine recruit at Parris Island.

The shakedown included rolling the ammo in sand before loading, short-stroking the bolt, single-­loading the rifle while it was sideways or at other angles, operating the rifle upside down, and working the action at a snail’s pace sometimes and as hard and spastically as possible at others.

Because a dangerous-game rifle is meant to excel under high-pressure and (forgive the pun) charged circumstances, it should work in an instinctual manner. In the case of the DGR, I could load and run it without taking my eyes off the target, and no matter from which angle I put pressure on it, the three-position safety always flicked to “fire” smoothly and instantaneously as the gun came to the shoulder.

Ultimately, I think the rifle got bored with my shenanigans–it calmly loaded, fired, extracted, and ejected every cartridge without fanfare, as if to say, Is that all you’ve got?

Lights Out
The DGR, for Dangerous Game Rifle, is built on a new action from Montana Rifle Company. It’s a double-square bridge Mauser action–a classic African configuration–large enough to accommodate magnum calibers. This relates directly to the rifle’s second mission: With a well-placed shot, it must be able to flip the off-switch on the largest thick-skinned and toothy animals.

Initially, it’s being offered in .338 Lapua, .378 Wby., .416 Rigby, .460 Wby., and, for the stout of shoulder, .505 Gibbs. All are capable killers, but I have a hard time resisting the allure of the .416, so that’s the rifle I got. (Note that the .338 isn’t legal for use on dangerous game in Africa, where a minimum caliber of .375 H&H/9.3×74 is required.) To handle these heavy-hitters, the DGR has two steel crossbolts reinforcing the walnut stock. And the strength of the Mauser action, with its controlled-round feed, is the stuff of legend. The dovetails machined right into the receiver are a nice touch and eliminate the need for scope mounts, which are a potential weak point, should you choose to go with an optic over the open sights.

Pinpoint Accuracy
During my accuracy testing, I shot three-round groups instead of the Outdoor Life standard of five shots, to give both my shoulder and my ammo budget a break. Premium safari ammo for the .416 Rigby runs anywhere from $100 to $200 for a box of 20, so this is no small consideration.

Though built to take down an elephant, the .416 would be hell on prairie dogs too. At 100 yards, it delivered sub-MOA accuracy with Winchester Safari ammo shooting 400-grain Nosler Partitions (.835 inch) and Hornady’s 400-grain DGX bullets (.995 inch). The overall average group size was an impressive 1.317 inches. I used Leupold’s new VX-6 1-6x24mm cranked up to 6X for this. The scope and rifle make a great pair. The range of magnification on the scope is perfect for most hunting situations, but it is especially well suited to Africa. At 1X the scope allows for both-eyes-open shooting and offers a wide field of view, which is just the thing should that hippo charge ­actually occur.

Once I completed the benchwork, I ran the rifle through a number of drills, emptying and reloading the gun while standing and kneeling, sometimes shooting unsupported and sometimes with the aid of shooting sticks. In every respect the rifle performed flawlessly, and I wouldn’t think twice about using it to crawl after a wounded buff in the thickest mopane underbrush.

The DGR comes at a good time for riflemen, too. Ever since Ruger dropped its Magnum line–which was the most economical dangerous-game gun that I’d be willing to bet my life on–there’s been a need for a moderately priced big-bore for those of us who aren’t addressed as sir, doctor, or m’lord.

The DGR I tested goes for $2,299, which is quite a bargain given the craftsmanship and performance of the gun. A stainless version is available for $100 more. Anything you can hunt with a rifle, the DGR can handle. It’s hard to top that.

One of the touches I really like on the Montana Rifle Company’s actions is the sculpting on the bolt shroud. The action has more than good looks going for it, though. The oversize bolt handle gives plenty of purchase for the shooter’s hand when cycling the bolt, and the full-length Mauser claw extractor had no issues at all with feeding and extracting the brass.

I mounted a scope on the DGR I tested, and that’s probably what I would use if I took it hunting. However, it comes with very workable open sights. The rear sight has graduated marks to help zero the rifle. Two set screws loosen to make adjustments, one for windage and the other for elevation. Its semi-buckhorn shape lines up quickly with the front sight, which is a strong brass bead on a tall post.