Photo by Rab Cummings Let’s cut to the chase: Any shooter who likes to seriously tinker with AR-style rifles is... 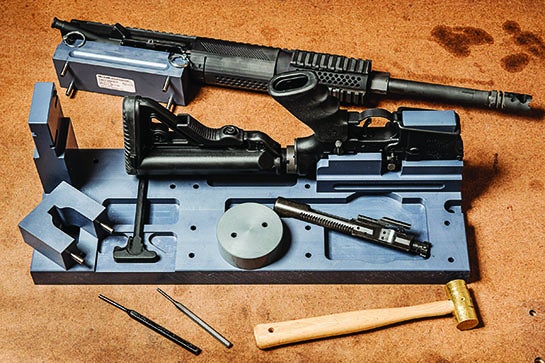 Let’s cut to the chase: Any shooter who likes to seriously tinker with AR-style rifles is going to want Santa to bring one of these for Christmas. Assuming the person can wait that long.

The Gunner’s Mount system is a great example of someone building a better mousetrap. In this case, the inventor–Mark Jenkinson, a retired Merchant Marine engineer–took a look at existing mounting tools for ARs and found them wanting.

The block he created is modular, and the jigs that go with it adapt to different components that hold them in place with remarkable precision. There are jigs that snug into the interior recesses of the upper and lower receivers and secure them with retaining pins to fully support the rifle.

Jenkinson intelligently added cuts in the base of the block for the charging handle and for the gunsmithing “pucks” that are commonly used, such as Brownell’s M4 Front Sight Block. The Gunner’s Mount incorporates little trays to keep small pieces organized, and there are numerous mounting holes to let you change the position of the jigs.

One of the most useful add-ons is a round swivel that holds the AR-15 magazine post. The swivel rotates 360 degrees, so the rifle can be angled in any direction while being cleaned or serviced.

Check out the Gunner’s Mount on the company’s website (presentarmsinc.com). The system isn’t cheap. The base costs $160 and the jigs run from $30 to $150. But the Gunner’s Mount will minimize the chance that you’ll wreck your rifle as you work on it. And for that reason alone, it is money well spent.