The Biggest Shotguns of All Time

Punt guns were used by market hunters in the early 20th century. The biggest we could find was a 300-pounder that could kill hundreds of ducks in one shot 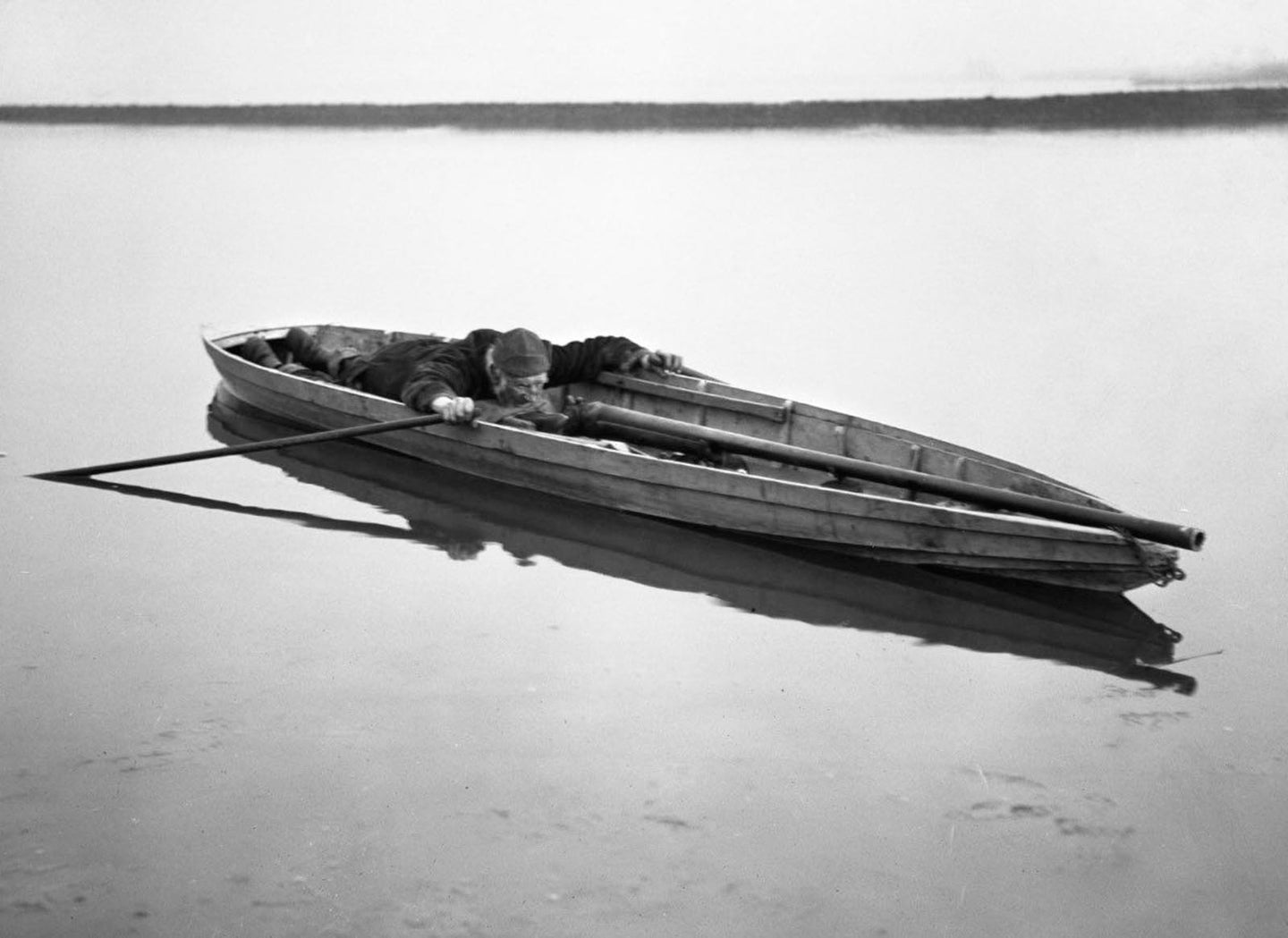 Punt guns like this one were used during the market hunting days to kill large rafts of ducks that were then sold to restaurants across the U.S. Wiki Commons
SHARE

Imagine lying flat on your stomach rowing a small wooden boat in the dark of night, closing in on a raft of ducks. Mounted to your boat’s stern is a 12-foot long, 150-pound shotgun. You pull a rope tied around a trigger or strike a percussion cap with a hammer to ignite a half-pound charge of black powder that sends thousands of pellets downrange at the resting flock of unsuspecting birds. The heavy recoil sends your boat lurching backward across the water. Dozens of dead ducks float belly up once the smoke clears. This was the daily life of an early 20th century American market hunter. Also known as watermen, the hunters used these massive shotguns, known as punt guns—a large gun attached to a boat called a punt—to kill ducks that were then sent by train to restaurants in major cities across the U.S.

“I once saw a 10-foot punt gun fired on land,” said Pete Lesher, chief curator at the Chesapeake Bay Maritime Museum in St. Michaels, Maryland. “It was heavily sandbagged to help keep it in place but when the rope [attached to the trigger] was pulled, the entire gun jumped back more than 10 feet  because of the amount of black powder it was loaded with. The ignition created an unbelievable amount of force. I can only image what that experience was like for someone shooting the gun out of boat at night.”

English gunmakers and engineers were the first to build these incredibly powerful guns in the late 1800s (punt guns remained legal in Britain for another hundred years until a 1981 ban). The London-based firm Holland & Holland, which is still making bespoke shotguns and rifles, designed extravagant single- and double-barrel punt guns for those with financial means. And Britain is responsible for engineering some of the largest punt guns ever. But most punt guns were crudely built by market hunters themselves, particularly in the U.S. where killing ducks could be quite lucrative. In 1914, a pair of ducks could fetch $3 ($86 when adjusted for inflation) and coveted canvasbacks went for as much as $8 or $9 ($258 when adjusted for inflation) per pair.

It’s hard to ascertain how many punt guns were in existence during the height of market hunting. Today it’s especially challenging since the death of Harry M. Walsh, who had one of the most extensive known punt gun collections in America before gifting much of it away prior to his death in 2009. Walsh’s book, The Outlaw Gunner provided a photo catalog of punt guns from the Eastern Shore of Maryland, but the location and size of many of those guns is a mystery, another hurdle to deciphering which punt guns are the biggest.

Because so many punt guns were made by private citizens and not large manufacturers, there’s no real index of U.S. or European-made punt guns. But after consulting museum curators, collectors, and veteran gun writers, I identified five punt guns of considerable bore size and weight, the largest of which—Irish Tom—shot a massive 50-ounce payload.

“It’s hard to know what guns are the biggest because so many of them were likely buried for safe keeping or hidden away when the [American] market hunting days came to an end,” Lesher said. “There are private collectors who may not want anyone to know they have such a gun, and it’s possible there are families that still have punt guns that have been handed down from one generation to the next.”

Built by an Irish gunmaker in the 1930s, Irish Tom is the largest punt gun ever constructed. Purchased by Stanley Duncan, the founder of the British Association for Shooting and Conservation (BASC), he had the muzzleloader converted to a breechloader in 1936. The gun weighs 300 pounds and is just over 14 feet long. It can shoot 50 ounces of shot. For reference, the largest modern turkey shotshells typically shoot a 2-ounce payload. Ignited by 10 ounces of black powder, Irish Tom could kill 100 ducks with one well-placed shot, according to the original owner. Because it was so heavy and the recoil so stout, the punt gun had to be secured to a punt that was nearly 23 feet long. The steel barrel was manufactured by Whitworth and the gun was mounted by British bespoke gun maker W.W. Greener.

Irish Tom was acquired by English actor James Robert Justice after World War II. He and the Duke of Edinburgh hunted with the gun in the 1950s on a bay known as the Wash, one of the last bastions of European punt gunning, located on the eastern coastline of England. After Justice’s death in 1975, Irish Tom could not be located for a time, but it was eventually found, restored, and gifted to BASC where it remains a part of their collection.

The George A. Lawyer Punt Gun

Not much is known about the builder of this American punt gun or its current whereabouts—though it may be the biggest shotgun in U.S. history. It was confiscated by federal agents (so it could have been destroyed). Pictured with the gun, which measured 10 feet, 9 inches and weighed 250 pounds, is U.S. chief game warden George A. Lawyer, who is also holding a 12-gauge for size comparison. The image was taken in 1920 two years after the ratification of the Migratory Bird Treaty Act, which established federal control over hunting waterfowl and, along with the Lacey Act, outlawed punt guns. Lawyer is credited with setting the wheels in motion for the development of the federal duck stamp in the early `20s though the bill did not pass until 1934. Ninety-eight percent of the money from the duck stamp goes directly to wetland protection and acquisition. It also funds the National Wildlife Refuge system.

This unique punt gun built by H&H in January of 1885 requires the shooter to load a 9¼-inch shell into the breech block and then screw the assembly together. To fire the punt gun, which has a barrel length of 85½ inches, an internal hammer is cocked via a cocking piece on the right side of the stock. Then the shooter pulls a lanyard attached to a firing ring on the underside of the punt gun. The stock is made of walnut and the screw breech features engraving on all the metal surfaces except the trigger plate. The brass sideplate is also adorned with scroll work.

Gallwey was an English engineer, historian, artist, and ballistics expert, who authored several books, including Wildfowl and Wildfowl Shooting with Shotgun and Punt Gun, which was published in 1896. He was an avid duck hunter and owned a Holland and Holland London, one of the first punt guns the British gun house manufactured in the late 19th century. A typical H&H London breechloader had a single barrel that measured 8½ feet, weighed 100 pounds, and had a bore diameter of 1½ inches. There are several of these models on display or part of gun collections in the U.S. (Cody Firearms Museum in Wyoming has one).

But Gallwey had his London custom made as a side-by-side. It was also a half-inch longer than stock London punts. The added length combined with second barrel likely made the gun weigh well over 100 pounds. According to his book, Gallwey tested the London at the Kensal Rise shooting grounds in 1885, loading it with 20 ounces of No. 1 shot. A recorded 1,353 pellets penetrated a 6-foot square target. Gallwey also claimed he once bagged 60 wigeon with the London, which had a selective trigger that allowed him to choose from the right, left, or shoot both barrels. For the latter, there was a slight delay between ignition of the first and second round.

Read Next: The Best Duck Hunting Shotguns for Waterfowlers

The manufacturer of this punt gun is unknown, so it’s possible it could have been made by a market hunter, though the craftsmanship suggests it was built by someone with considerable skill. Rock Island Auction is the current owner of the 1¼-inch bore breechloader, but the gun is set to sell in August 2022 for an estimated price tag between $7,000 to $11,000. The punt gun is 7-foot, 7¼ inches long with a barrel length of 66 inches. This gun was designed with a brass sleeve that fits over the barrel and holds a swivel peg mount in place so that the shooter could move the gun easily. Many punt guns were cradled in a fixed position due to their weight and to try and dampen recoil. That required market hunters to maneuver the boat into a more precise location to take the best shot on a raft of ducks. To fire the breechloader, an external hammer had to be cocked before pulling the folding trigger. The oak tiller-shaped stock slid underneath the shooters arm for a secure fit. Like the H&H London there were punt guns built with the same bore diameter (or close to it) as this one.