Take a Spin: Master One of the Toughest Handgun Targets

The buddha, who praised the virtue of humility, would have loved the spinner. It is a simple target—just two steel... 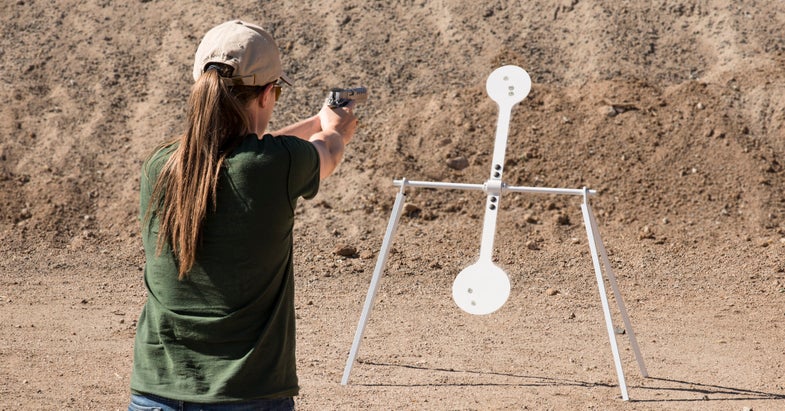 The buddha, who praised the virtue of humility, would have loved the spinner. It is a simple target—just two steel circles connected by a crosspiece that rotates around a spindle. Because one circle is larger than the other, the target naturally comes to rest in a vertical position. All the shooter needs to do is hit the circles until they make one complete rotation around their axis. Like I said, simple.

Well, humility can enter our lives in different guises, and whoever invented the spinner did a masterly job when it comes to providing shooters with what are euphemistically known as “teachable moments.”

Barring good fortune, or preternatural marksmanship ability, the first time a shooter takes on the spinner, it is unlikely to go well. This is because success with this target requires the simultaneous application of several skills. The shooter is going to need to have all his shooting fundamentals in order, as well as good shot timing and a healthy dose of poise.

The Goal
Getting the spinner to flip over requires placing multiple shots on both the larger bottom circle and the smaller top circle. Each good hit will make the steel move faster, and eventually the target will gain enough momentum to spin all the way over. Notice I said the hits need to be good. This is because a hit at the wrong time or in the wrong spot will slow the target down and reverse your hard-earned progress. Errors of this sort make grown men weep.

Starting Off
A proper shooting stance and a good grip on the pistol are a must with the spinner. The only way to deliver rapid, accurate hits is with impeccable form. Take an athletic stance, with your feet about shoulder-width apart, knees slightly bent, and weight forward on the balls of the feet. Your feet should be relaxed and staggered, with your support- (or weak-) side foot about 6 inches in front of the strong-side foot.

Your grip needs to be rock-solid. Get your support hand wrapped firmly around the shooting hand and squeeze tight. Your palms and the meat of your thumbs should make contact with and support the entire circumference of the pistol stock.

Make every effort to take on the spinner with a fully loaded magazine. Even if I’ve only taken a shot or two prior to getting to a spinner in a match stage, I will swap mags to make sure my handgun is topped off with as much ammo as possible.

Shot Sequence
The first shots on a spinner are the easiest ones. Make the most of them. The target isn’t moving, your gun is fully loaded, and you are as fresh and relaxed as you’re going to be.

Get a good sight picture and try to place three rapid hits on the bottom circle. Shooting faster than your ability is going to cause you to miss and won’t do you any good. But dawdling and making hits one at a time isn’t going to make that spinner flip. Striking the right balance between speed and accuracy is critical.

After getting your hits on the bottom steel, transition to the top target and wait for it to swing into view. Your goal is to get two good hits on it. This is going to be tough because the target is smaller and it is now moving, but if you quickly get your sights in a place where the target is going to be, you’ll be ready to break the shots as it swings into your sight picture.

If all has gone well, you’ve shot five times and made five hits, and the target is moving fast. Time to finish it off.

Troubleshooting
However, before we start popping the champagne corks and taking a victory lap, let’s look at some of the things that can (and will) go wrong.

One of the biggest challenges is keeping your eyes focused on the front sight. The temptation as you transition from one target to the next is to keep your eyes on the steel circle and watch for your hits. If you do this, all you’ll be watching are your misses. Don’t take your eyes off the front sight.

Another common problem is not maintaining a good shooting grip. Even if you squeeze with proper force for the first shot or two, it isn’t unusual for the hands to relax some on longer shot strings, which will increase the time it takes to recover your sight picture. To overcome this, practice shooting longer shot strings at the range on static steel while keeping your grip tight.

Almost invariably, once you start missing and try harder to aim, you will hold your breath. The solution, of course, is to stay relaxed and breathe normally. This is easier said than done. The trick is to recognize early on that you’re holding your breath and to make a brief, conscious effort to exhale and resume a normal breathing cycle.

Reloads are also important. Sooner or later, you’re going run your pistol dry while shooting the spinner. There’s nothing more dispiriting than fumbling with a magazine change as the spinner bleeds off whatever momentum it had before you can get your gun back in action.

Practicing smooth reloads under pressure pays dividends with the spinner. The best way to improve this skill is to change magazines as fast and fluidly as possible while dry-fire training with an empty gun at home and while shooting with magazines loaded with just one or two rounds at the range.

Timing It Right
A shooter’s trigger control takes on additional importance with the spinner. When the target starts moving, the steel is in the right position to be shot for only a portion of the time, meaning the shooter needs to break his shots at the right moment.

Once the target is in motion, the circles should only be engaged while they are moving away from you. Avoid the mistake of shooting the steel late in its swing. At that point, there’s a good chance the steel has started to move back toward you, and any hit will be counterproductive.

The Final Rounds
So, in our ideal scenario, we’ve got a handful of good hits on the target and it has gained speed. As the target moves through larger swings, the time between shot strings increases.

Chances are good that the spinner will move to a point where it almost, but not quite, wants to flip over. You’re going to have to judge whether an extra shot or two will drive it the rest of the way over or if you should wait for it to swing back and finish it off then.

The total number of hits required to flip it depends on the caliber and load you’re shooting, how well you’ve placed your shots, and how much friction there is in the target’s bearings.
Shooting a 9mm with light bullets, it can often take 9 to 12 hits to turn the target. But the number of shots isn’t as important as the time it takes to complete the drill. Shoot cleanly, and you’ll flip it in a matter of seconds. Mess up, and it can feel like you’re standing there for a lifetime.