Sharpen Your Handgun Accuracy With The MantisX Shooting System

A tool and techniques to fix flaws in your handgun accuracy. 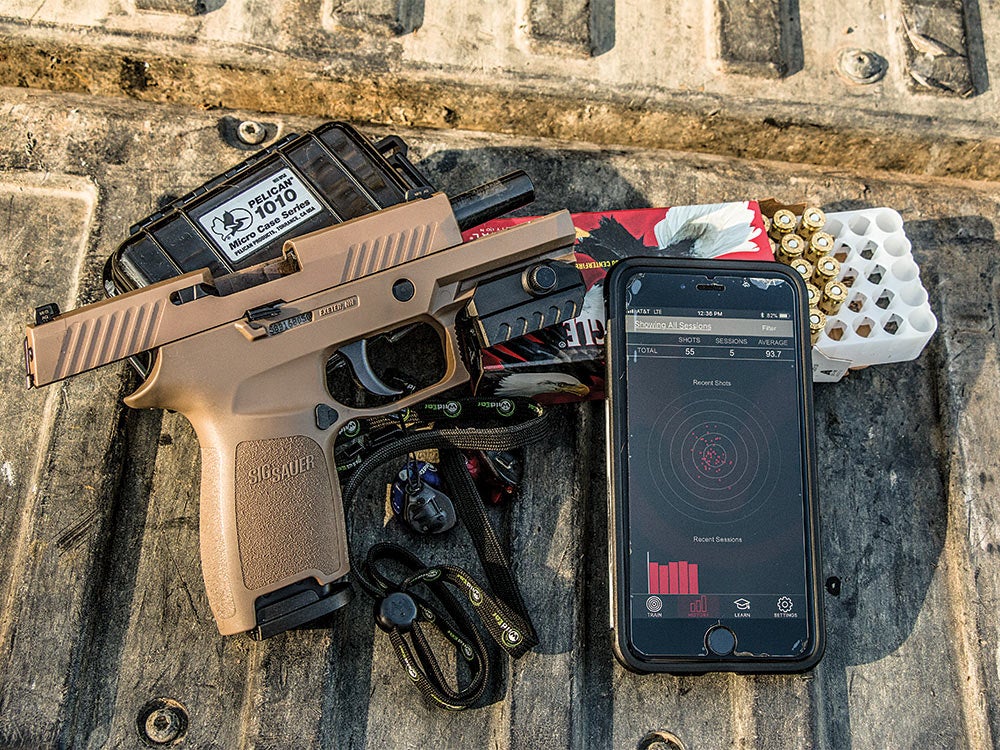 The MantisX attaches to the rail on your pistol and displays information on your phone. Richard Mann
SHARE

Dry-fire practice is as boring as peeling potatoes and about as fun as plucking nose hairs. As tedious as it is, it’s one of the best ways to keep your shooting form in shape. This is partly because the secret to hitting what you shoot at has nothing to do with ammunition and everything to do with keeping the sights properly aligned while the trigger is pressed. It’s also partly because dry-fire practice is free.

Finding the time to dry-fire practice is one thing; extracting meaningful feedback from a dry-fire session is another. It can be difficult to identify and correct mistakes. But there is a tool to help with that, and it’s called the MantisX.

The MantisX is a module that very much resembles a laser sight or weapon light that attaches to the accessory rail of your handgun. It’s actually a motion-sensing device that interfaces with your smartphone to help you diagnose what you’re doing wrong when you pull the trigger. It’s kind of like a virtual shooting coach.

Train With Any Handgun

One appealing feature of the device is that it will work during dry fire and live fire, with CO2 and airsoft platforms, and on handguns and long guns.

This cool tool, which costs $149, actually tracks and plots the direction and magnitude of firearm movement during trigger press. With each individual shot, it can tell you the movement of the firearm during the sighting process, during trigger pull, at the time the shot broke, and through recoil. Your feedback comes in the form of a score, chart, and graph, which are easy to decipher.

I worked with the MantisX device dry-firing and live-firing a SIG P320 on several occasions. What I learned was fascinating. First, I found the unit to be foolproof; it recorded every trigger pull during a dry-fire or live-fire session. Just as important, the feedback it provided coincided with my interpretation of my shot, and, more important, with what the target showed.

For example, the first time I worked with the unit, it indicated I was using too much trigger finger—hooking my finger around the trigger and pulling my shots to the right—which is something I tend to do. For the next 10-shot string, I made a conscious effort to correct that mistake, and my score improved. However, for that string, the feedback indicated I was breaking my wrist upward. This causes bullets to strike high, and guess what?

That’s where the majority of the holes in the target were. Granted, we’re talking only slightly high—my group was good—but that shows the precision of the instrument. As an experienced shooter, in most instances I realized the error of my ways just as the MantisX did. But for a novice, I can see it being a beneficial training tool, particularly because when the device indicates a problem with your form, you can tap that feedback and receive instruction on how to correct it.

If there’s a downside to the device, it’s that it’s not holster-friendly; it’s primarily a sight-alignment and trigger-press evaluation coach. And, obviously, it will only attach to a firearm that’s equipped with an accessory rail. That said, I could envision enhancements with the MantisX down the road. It might even become something like a firearm-mounted shot timer that interfaces with your phone.

Regardless how you feel about technology, I think this device is well worth the price of admission, especially for a new shooter or one who is struggling to hit their target. We use our smartphones for everything else nowadays, so we might as well use them to help us shoot better too.

Tap Into Your Subconscious for Better Point Shooting

Instinctive shooting is a very useful defensive handgun skill. Use these tips to sharpen your skills at point-and-shoot handgun aiming.

Bruce Piatt is one of the top shooters in the world and was a trainer for the New Jersey State Police. He told me everything within 20 feet should be point shooting with a defensive handgun. In a defensive situation, it makes sense to have point-shooting abilities. After-action reports show that, almost without fail, people don’t look at the front sight in a panic situation. Even trained people. Our instinct is to look at the threat. So why not develop that instinct into a usable shooting skill?

If your lizard brain takes over in a panic situation and you focus on the threat, this technique will have given you the skills and muscle memory to make the hit. If you have enough presence of mind to see the sights, so much the better. Either way, you hit the target. Of course, point shooting is also very useful in low-light situations, where seeing the sights can be hard or impossible.

The proper way to point shoot is to raise the gun to your normal shooting position. The difference is that you look at the target, focusing on where you want to hit rather than on the sights. It’s important to focus on a specific location rather than the entire target. Like they say, aim small, miss small. So focus on exactly where you want the bullet to strike. The amazing thing is, before long, that’s where the bullet will hit.

To learn some of the techniques, I took a course at the Sig Sauer Academy a few years ago called Reflexive Shooting, which is a fancy name for point shooting. It was taught by a sharp young instructor named Dylan Kenneson and was extremely informative.

For this course, we removed the sights from our guns. Those who didn’t want to remove them covered the sights with tape.

Start with the gun in the low-ready position at 3 yards from the target. On command, raise the gun and fire a shot at the target. When you are this close, use only paper or cardboard targets unless you have frangible ammo.

Repeat that drill several times until you are comfortable with it. I find it is very easy to get center hits every time at that range. It’s also amazing how fast you can break the shot when you don’t have to think about sights. Within just a few practice cycles, you should be able to easily do head shots on a USPSA target in under a second.

Once you have reached this point, take one step back and shoot again. When you are making center hits every time, take another step back and shoot. Keep moving back, and at some point you will no longer make center-mass hits 100 percent of the time. That is your maximum point-shooting distance. For most shooters, it will be 10 to 15 yards. Beyond that and you must go to sights. Of course, that is subject to change as your skills improve.