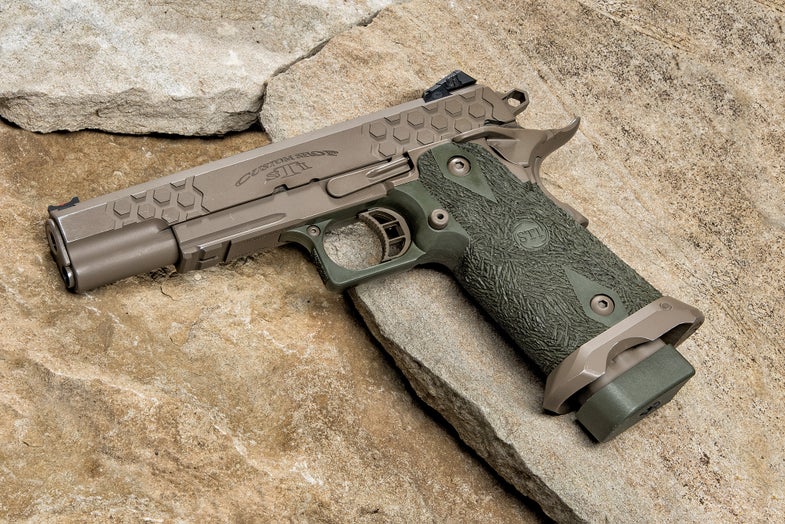 STI is one of the most interesting gun companies out there, and it has a good reputation for its custom and semi-custom pistols, but I don’t think it gets all the credit it deserves. The Model 2011 represents one of the most significant handgun design innovations of the modern era, and its frames are the gold standard for custom guns made for high-level action shooting. Yet most shooters—even the folks that run STIs or a custom pistol built on an STI frame—couldn’t tell you what makes an STI special.

But the real magic of the STI is its modular design. Unlike other high-capacity double-stack 1911s, the STI has a frame that consists of two major components. The dust cover and frame rails are steel, but the lower half of the frame—the grip, magazine well, and trigger guard—are made from reinforced polymer with steel inserts. Because this polymer section is one piece, it is both slimmer and lighter than a traditional steel frame.

Despite the loss in frame weight, the 2011 still balances nicely in the hand due to the fact that a high-capacity magazine loaded with 20 or more rounds of 9mm is fairly hefty. (Loaded with 21 rounds, my magazines weigh 13 ounces.)

The end product is a pistol that benefits from the 1911’s excellent ergonomics and is reliable, accurate, and able to put a lot of lead downrange between reloads.

The Hex Tactical here is, technically speaking, one of STI’s custom pistols, since it was built to my specifications. But the company has decided to offer it as one of their standard products, with a couple of minor changes.

One reason I chose this pistol is that we’re seeing more 3-Gun and other action shooting competitions that incorporate low-light stages or, in some cases, are shot exclusively in the dark. The Hex Tactical has all the attributes of a normal competition gun, but with the addition of a rail for mounting a light, a laser, or a unit that combines both.

The features that make the Hex Tactical competition-ready include the generously sized controls and hardware. The mag release button extends 0.172 inch from the frame versus 0.1 inch for a standard 1911 mag release. That extra bit makes it easy to find and depress when you’re running and gunning. Reloading the STI is nearly effortless, thanks to the way the tapered tip on the magazine finds its way into the flared magazine well. As one of my shooting buddies says, “It’s like throwing a hotdog down a hallway.”

An ambidextrous safety is a must-have feature for a left-handed shooter. While common on 1911s, ambi safeties often don’t work well, either because they haven’t been installed correctly or because the safety itself has too much flex in it. They can often bind up and be difficult to manipulate when the gun is grasped with a full-strength shooting grip. But that’s not the case with this pistol. The safety runs as smoothly under the left thumb as it does under the right.

STI puts an aggressive stippling pattern all the way around the grip and even adds a bit in front of the trigger guard. The stippling gives great purchase for the shooter’s hands and keeps the gun from flopping around under recoil.

The trigger on my gun breaks at a crisp 3 ½ pounds, which is perfect for a competition pistol used in action shooting. It has a short, light takeup and a clean break.

The sights on the pistol include an adjustable TAS rear sight and a narrow front post with a fiber-optic insert. The narrow front sight makes for faster shooting as it floats in the rear notch and is easier for your eyes to pick up. The sighting system doesn’t detract from the pistol’s accuracy, however. I’ve used it on stages where you have to knock over small 3-inch plates at 20 yards, and it tips them over with gleeful abandon. As for speed, the STI is at the head of the class. Muzzle flip is negligible. The front sight barely seems to bounce as you take on plate racks, spinners, and other targets that demand fast shooting.

The reliability of the pistol has been excellent. I’m not sure how many rounds I’ve put through it over the last year and half, but the number is well into the thousands. During that time I’ve had zero failures in competition and while training. This is pretty remarkable given my blasé attitude with respect to the type of ammo I shoot. I’ve run everything from premium match rounds to bargain-basement reloads.

But as with any firearm that sees hard use, I make a point to keep the gun clean and well oiled, and take care to wipe grit out of the magazines in between stages where lots of dust and dirt are present.

The pistol is finished in a desert tan and OD green pattern. The Cerakote metal holds up to hard use, though it will show signs of holster wear after a time. The standard color for the Hex Tactical is black, but you can order other colors, and configure the gun the way you like, via STI’s custom shop.

STI’s pistols are built by masters of the craft, and the company takes a lot of pride in its products. The company, which is based in Georgetown, Texas, is employee-owned—the only major firearms company that can make that claim. I’m sure this is part of the reason these remarkable guns perform the way they do.