How to Shoot Your Handgun Better and Faster

A winning speed and precision drill for action handgun shooting 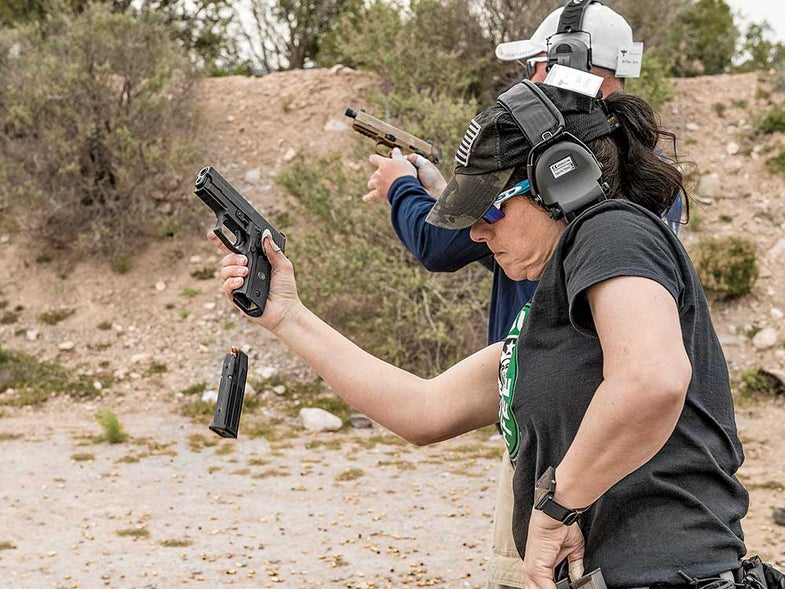 Suzanne Rickabaugh works on her reloads during a class at Gunsite. Yamil Sued
SHARE

Despite the elaborate and often confusing scoring systems used in the various competition disciplines involving handguns, with any of the action sports, speed and precision are most important. Shoot faster than everybody else and make the hits in the right place on the target, and you win the competition. It’s really that simple.

This drill builds some of the skills needed to pull that off. The first is to draw and fire the first shot with precision. It’s easy to be fast; it’s not easy to be fast and accurate. As Bill Jordan said in his classic book on gunfighting, No Second Place Winner, “The history of gun fighting fails to record a single fatality resulting from a quick noise.” I might add to that something we hear a lot at competitions: “Nobody ever won with a fast miss.”

Three Skills
That’s why this drill uses a relatively small target at what is considered long range for a handgun. It teaches you to slow down enough during the draw cycle to focus on the sights and the trigger break. Without a hit, the speed means nothing. But once you master the skills to make the hit, you can focus on doing it faster and building the speed.

The second skill it teaches is how to reload quickly from the belt. This is a skill we need in competition. Most shooters do not practice it enough, and if they do it’s usually without a timer, so there is no way to judge if they’re are getting better. Most of us just reload when the magazine runs dry. This drill makes you practice the reload with each repetition.

The third skill this builds is getting back on target and firing another shot quickly, with precision, after the reload. You need to move the focus of your eyes and your brain to the gun for the reload, and then back on target for the shot. Often we find that we shoot well on the first shot after the draw and then miss after the reload. That’s usually due to a lack of focus and trying to go too fast. This drill trains you in how to get focus back to the target and on the shot.

Steel at 25
The target is at 25 yards to ensure that you must aim with the sights. I use a 10-inch steel plate, but any target this size or smaller will work. Once I think I am getting really badass, I switch to the 8-inch plates on my MGM Plate rack and find that I am delusional, as I start missing again. If you use paper targets, be brutal and go for center scoring ring hits. The idea is to make precision a big part of this drill. If you think you have it mastered, move back another 5 yards and prepare to be humbled.

At the buzzer, draw and fire one shot. Drop the magazine, reload with a fresh one, and fire a second shot at the target to stop the timer. Both shots must hit the target to count.

On a good day, I can do the first shot in 1.5 seconds and the second in 4.5 seconds. Not world class by any means, but it is a marker for me to work to improve on. If you can get the first shot on target in 1 second, reload, and hit it again in 3.5 seconds, then you can brag.

Mix It Up
For variety, load the first mag with one cartridge so that the reload is from slide lock. This usually adds a tenth of a second to the time. It also helps in recognizing that the gun is at slide lock. Too often in competition, we lose count and the gun runs dry. If you are like most of us, it takes a second to realize why it’s not shooting anymore.

What we are failing to realize when we are in the zone and full of adrenaline is that the gun will feel different when it goes to slide lock. If you practice this drill with a single cartridge, your mind becomes trained to the different feel and sound of a gun that is out of ammo. You will find you can react faster because you instantly recognize the situation. Call it muscle memory, brain train, or whatever, but when you run dry in competition, you will react faster after practicing this drill.

Another variation is to fill all your magazine pouches and keep doing the drill through three or four reloads. This forces you to maintain concentration and focus while on the clock. If you can do each of the reloads, followed by a precision shot, as fast as the first one, you are holding focus.