Handguns: How to Shoot One-Handed

Achieving a good score on the fast-paced Action Pistol stage is tough enough with a two-handed firing grip. Unfortunately, shooters... 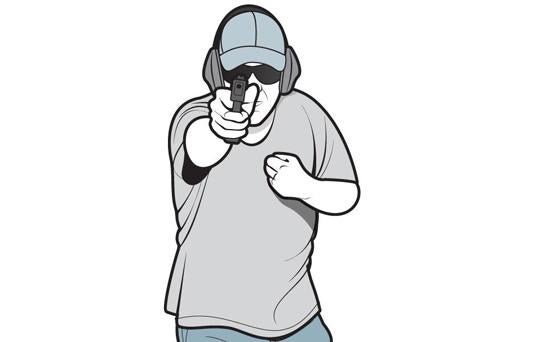 Achieving a good score on the fast-paced Action Pistol stage is tough enough with a two-handed firing grip. Unfortunately, shooters don’t always have that option. The major Action Pistol groups–USPSA, ICORE, IDPA–often require shooters to fire with only one hand during matches. Sometimes it will be with the dominant (strong) hand and sometimes with the non-dominant (weak) hand. Those who fail to master these skills will see their scores suffer. But becoming proficient in one-handed shooting out to 15 yards is simply a matter of proper technique and practice.

Shotokan Punch
The best technique is the Massad Ayoob Stress Fire “Shotokan Punch” stance. It is derived from karate moves that emphasize power and control.
To assume the basic stance, face the target squarely and extend the gun (with either hand) fully toward the target, with the gun-arm elbow locked to full arm extension. Then place the gun-hand foot ahead of the other foot by 8 to 15 inches. From that position, flex the knees and bring at least 60 percent of the body weight to the leading foot. This creates a solid, weight-forward power position that minimizes the effect of recoil while allowing full gun mobility. Bring the non-shooting hand to the upper chest with the palm up and the hand clenched. This symmetry between the two sides of the body improves control.

Drill
Begin practice on a single target at 5 to 7 yards to build basic skills and confidence. Once you’re comfortable with that, place two IDPA or USPSA targets spaced 6 feet apart and 5 to 10 yards downrange. Place two rounds to the body and one round to the head box on one target, then transition immediately to the next target and repeat. This stresses speed, accuracy, and target transitions. At 7 yards, Master Class shooters will deliver six perfect hits in less than five seconds with the gun starting at the low-ready position in the weak hand or when drawing the pistol with the strong hand from a holster.