My Guess? An Albino Alopecic Manatee After a Hard Night of Partying. Two nurses walking their dog Sam on a... 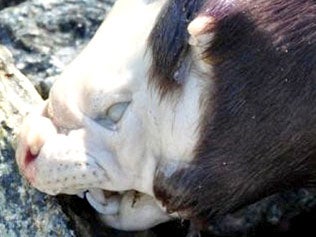 My Guess? An Albino Alopecic Manatee After a Hard Night of Partying.

Two nurses walking their dog Sam on a lake near their hometown of Kitchenuhmaykoosib in Ontario, Canada…

Wait a minute…what the hell kind of crazy Canuck name is Kitchenuhmaykoosib? That name’s 18 letters long. How do schoolkids learn to spell a word like that? How do people who live there get their mail? Because the name of town sure doesn’t fit on any envelope I’ve ever seen. Okay, end of rant.

…when they came across an extremely twisted and deformed animal form on the shore that they couldn’t identify. The animal had the head and snout of a hairless pig, boar’s tusks, a hairy otter-weasel-like body and a long, skinny rat-like tail. After studying it for some time, the nurses took photos and returned to town to tell others about their discovery. When locals arrived on the scene, the animal was gone. Despite the body’s absence, locals were baffled, based on the pictures, as to what the animal was.

Kitchenuhmaykoosib (that name again!) Police Chief Donny Morris was quoted as saying, “What it is, I don’t know. I’m just as curious as everyone else.”

So, what was it? I’m not sure. As someone who spends a lot of time outdoors, I’ve seen that water, sun and rot often leave dead animals contorted and not looking anything like they were when alive. Maybe it was just a rotted otter. Maybe it was a weasel.

Maybe the good folks of Kitchenuhmaykoosib should concentrate on changing the name of their town to something people can easily pronounce, rather than worrying about rotted animals.

What species do you think the Kitchenuhmaykoosib creature was? Comment below.
**
UPDATE**: Officials now believe the animal in question was a dead mink.