The red wolf was declared extinct in 1980. So how did one wind up at Diane Pulliam’s house in Florida?... 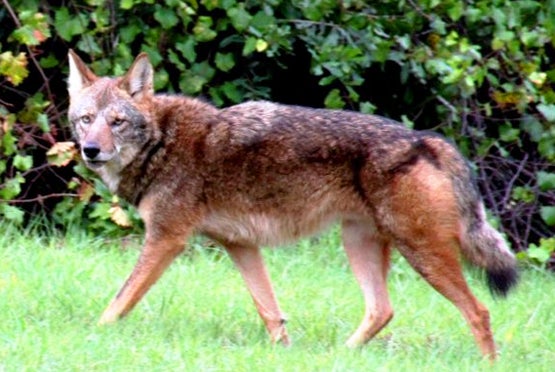 The red wolf was declared extinct in 1980. So how did one wind up at Diane Pulliam’s house in Florida? And is it the real deal? Authorities aren’t sure.

It’s tough to distinguish red wolves from their taxonomic cousins. Based on Pulliam’s hasty snapshots, her backyard visitor could indeed be a red wolf–or just a coyote, depending on whom you ask.

But David Rabon, coordinator for the Red Wolf Recovery Program, thinks it’s probably a coyote: Those creatures, especially in the east, take on unpredictable physical traits from interbreeding with other species.

He also mentions the improbability of a red wolf appearance. The US Fish and Wildlife Service estimates less than 100 red wolves roam the wild today, most of which have survived due to captive breeding efforts in North Carolina.

What do you think? Red wolf? Coyote? Or weird mutt?