People in the affluent Cape Town suburb of Constantia, South Africa are being overrun by drunken baboons. Ok, not all... 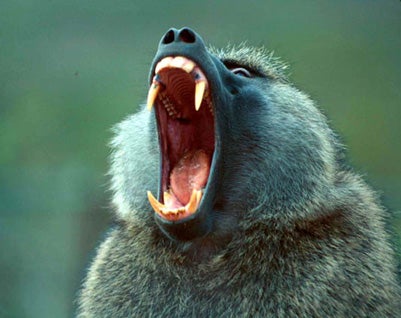 People in the affluent Cape Town suburb of Constantia, South Africa are being overrun by drunken baboons.

Ok, not all of the baboons are drunk. But many are. All of them however, are destructive, frightening and deadly.

At the 325-year-old vineyard Groot Constantia the primates have stripped vines of fruit, entered and raided kitchens and other rooms, and ripped thatch off the roofs. Some have eaten fallen grapes that have fermented in the sun only to pass out. Away from the vineyard, baboons have killed farm and ornamental birds (such as peacock) and pets as large as a Great Dane.

They have destroyed gardens, fences – even some electric fences – and chased people. One 12-year-boy entered his kitchen to find a troop of baboons ransacking the cabinets. When he turned to run, the baboons chased him upstairs. All of this in a community with such noted residents as Earl Spencer, Wilbur Smith and Nelson Mandela.

Part of the baboon problem stems from the fact that the animals were awarded “protected” status a decade ago and by law may not be harmed. This has turned the fight against the invading baboon into a show of comedies. People regularly bang sticks, yell, scream and shake rubber snakes at the primates in an effort to get them to flee to no avail. This has brought about new laws as well as the formation of 20 full-time “baboon monitors” charged with scaring the baboons away. Needless to say, the monitors have failed.

The monitors do keep track of the offending parties and any baboon that enters a home three times is caught and humanely destroyed. To date, only one baboon has been euthanized, a move that brought about both outrage and delight from the community.

Considering their strength, their massive canine teeth, and the fact that they have lost all fear of man I say it’s time for more extreme measures. And by extreme measures I mean shoot them. I know I would if they came in my yard.