GRAPHIC IMAGE WARNING! While hunting on Kodiak Island Matthew Sutton stumbled into an outdoorsman’s worst nightmare: a mother bear and... 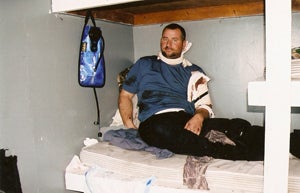 Sutton after the attack, back at their hunting cabin, keeping himself hydrated with a blue camel back water bladder, hanging on the right. The bladder came from his Cabela's Alaskan Outfitter Frame Pack. For two and a half days, he sipped warm sugar water from bladder. In this photo, Sutton's alert and fairly lucid. Yet, for much of the 2.5 days after the attack, Sutton was in a semi-conscious haze of fear and worry. The pain drove him to distraction. Pain meds? A bottle of aspirin. The warmth inside his body told him he had an infection--and it was getting worse. He tried to keep up his spirits, but the reality that he might die was very strong. October in Alaska, the dark comes early and stays well into the morning, and the dark became oppressive to Sutton. "I kept asking Bill, What time is it?" Sutton says. "He'd pick up the lantern on the table and come over to me. That light in my eyes--I felt I was being interrogated.".
SHARE 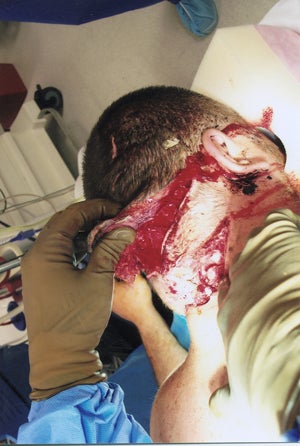 Matthew Sutton survived a horrific bear attack while hunting on Kodiak Island. He was mauled multiple times and had to wait for days before being rescued. This is a recount of his story and the surgery that saved his life.

GRAPHIC IMAGE WARNING! While hunting on Kodiak Island Matthew Sutton stumbled into an outdoorsman’s worst nightmare: a mother bear and her two cubs.