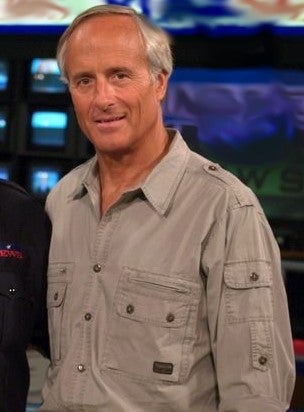 For years we’ve watched Jack Hanna appear on late night television shows handling exotic animals and wowing crowds, but on a recent hiking trip, Jungle Jack got a little more than even he could handle. Hanna was hiking with his wife in Glacier National Park when they were approached by a mother grizzly bear and her two cubs. They were on a narrow trail with a steep cliff on one side.

Hanna, a television personality and the director of the Columbus Zoo and Aquarium, backed down the trail with his wife. They talked loudly and backpedaled down the trail with the grizzlies following close behind when they eventually ran into five more hikers, including a man and his 10-year-old son.

The group backed their way into a rocky clearing off of the trail and two of the bears walked by. But one of the cubs remained on the trail and stared down the hikers, then it charged. Luckily Hanna was packing bear spray.

“The animal starts coming for us, and I can’t judge, because it happened so fast, 20 to 30 feet. I unloaded a blast of pepper spray, that was too far, I should have known better, but when a bear is coming to you, you only have four puffs, so I puffed the one and he still is coming and the wind took it,” Hanna told channel 10 news in Ohio. “I unloaded it about 20 feet, maybe 15 feet, real close to that, and the bear shakes its head. Then, 10 feet, it happened in seconds, and looking (at the bear) right in the face, and then bam! I unloaded the whole can in his face and the bear starts going back toward its mom and other baby. And at that point I said, ‘Oh, Thank God.'”

Hanna said it was the first time he has ever used bear spray. None of the hikers were hurt in the encounter, but five years ago a man and his daughter were mauled by a grizzly on the same hiking trail.