To construct a tool with your hands that will be used for years is more satisfying than anything else. This... 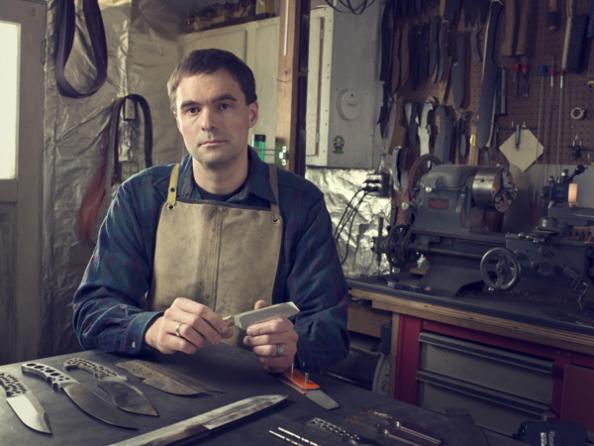 To construct a tool with your hands that will be used for years is more satisfying than anything else. This is the motivation that drives Dan Frazee as he crafts knives in the garage of his Tumwater, Washington, home.

As a knife maker, Frazee is currently somewhere between beginner and breakthrough. The 36-year-old physical therapist began making knives in 2000, but has since taken his craft beyond the hobby phase.

“I started out doing a few kit knives, and I was hooked,” he says. But those with steel in their hearts don’t stop there. “It kind of snowballed,” he admits.

Graduating from hand files and sandpaper, Frazee began to make major investments in his passion: A belt grinder, a metal lathe, two drill presses, a forced-air forge, and a milling machine–among other tools of the trade–now share space in his 13-by-15-foot shop.

Frazee watched, listened, and applied the lessons. Now he makes about 40 knives a year.

Shop time doesn’t come easy, though; he balances it with time spent with his wife and two young sons. But he knows that to be a real knife maker, there’s no substitute for the time it takes to develop the skills.

“To become successful takes a lot longer than you’d think,” he says. “You discover, firsthand, why guys charge so much for a custom knife.”