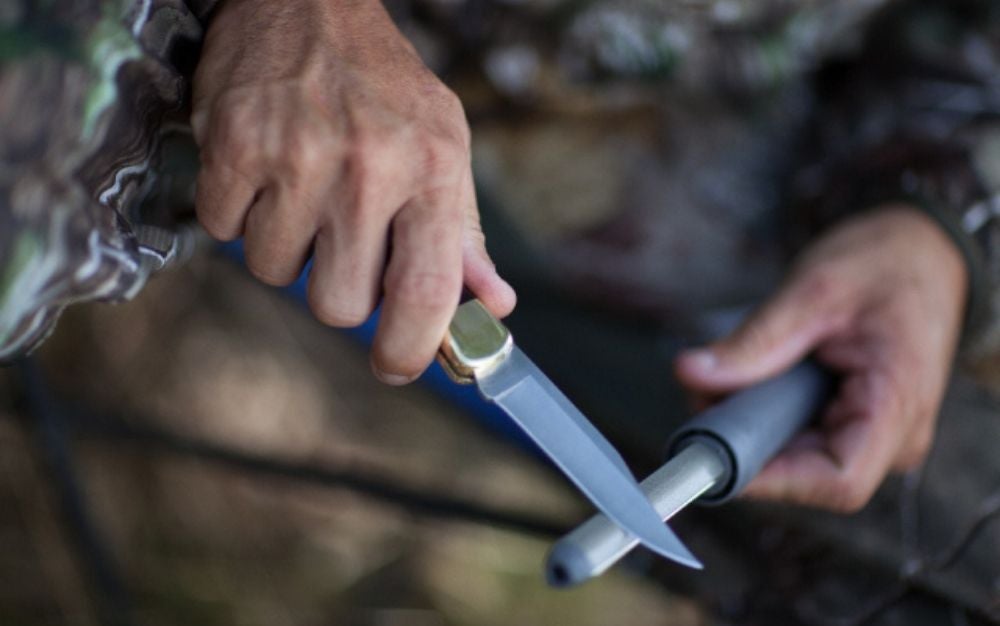 We put skinning knives to the test in Alaska and come up with five top models.

You might assume by its name that the skinning knife has a single job. You’d be wrong. The best skinning knife has a versatile blade design to enable you to field-dress game, remove and then flesh the hide, whittle a tent peg, and then carve a toy boat in the spare time they’ll give you. There are both fixed-blade skinning knives and folding skinning knives. The best are sharp out of the box and designed to take and keep an edge when they dull. They’re our ultimate survival gear, and they’ll take care of you if you first take care of them.

There is no shortage of quality knives on the market, with more every year as brands deepen and broaden their product lines. Even the number of companies continues to grow, with upstarts joining venerable knife makers such as Benchmade, CRKT, Ka-Bar, Buck, Gerber, and SOG.

How We Tested Skinning Knives

In order to help you find the best skinning knife for your style and purpose, we picked five different types: folding knives, fixed-blade knives, straight-ahead survival and camping knives, skinning knives with removable blades, and one high-end skinning knife that every hunter can aspire to. Some are from familiar brands, others from companies that have quietly made reliable hunting knives for decades.

I put all the blades to the test during a fly-in, do-it-yourself caribou hunt in Alaska, northeast of Kotzebue. Each knife helped field dress, quarter, and then bone out two entire bull caribou, while also helping with other camp chores. While I spent more time taking care not to cut myself or be ambushed by the abundant grizzly bears around my caribou hunting area, I also assessed the versatility, sharpness, ergonomics, blade design, and portability of each of these knives as they helped me make meat in the wilds of Alaska.

Back at camp, I then put each of these knives to the specific task that defines the group: skinning quarters of caribou. For this task, I assessed their ability to make the precise slices between hide and meat, their ability to make fine and coarse cuts, and their ability to retain their edge and clean up after their job was finished. I even used them to cut up fresh caribou tenderloin at the end of my successful hunt.

The best skinning knives feature what are called “drop-point” blades. These have some variation on a tip that descends from the spine, or the unsharpened back of the blade. The point is usually thicker at the tip, which allows for more controlled slicing. Drop-point knives tend to perform better on animal skins, because the point doesn’t easily  stab or poke holes in the hide. The main alternative to a drop-point is a clip-point blade. That design has a sharper, thinner point that’s better for stabbing but not nearly as good for skinning or even gutting an animal.

Three Things To Consider When Shopping for the Best Skinning Knives

Before I dive into the attributes of each knife we tested, consider three things based on the tasks you’ll ask your knife to perform.

The Cinco isn’t billed strictly as a skinning knife, but that’s one of the many tasks that it handles with aplomb. It’s one of the easiest knives to deploy with a single hand, thanks to a flipper that accelerates opening, and the G10 synthetic handle scales retain plenty of grip even when wet. The modest drop-point blade works well for field dressing and skinning, but is also suited for the tougher jobs like separating joints and cutting tendons.

This is the venerable Havalon style of replaceable-blade knife, but on steroids. Outdoor Edge has perfected the blade-replacement process, using a simple plunge button to make changing blades fast and safe. The blaze-orange fiberglass handle is textured, making it easy to grip, and the blades are large and strong enough to make both aggressive and fine cuts.

This best backcountry skinning knife is weighing just two ounces, with a skeletonized handle that not only trims weight but actually makes the knife more nimble, the Serac was my go-to caribou-butchering blade. The super-premium S35VN steel retains its edge for many animals, and the blaze-orange sheath makes it (almost) impossible to lose. At over $200, it’s an investment-grade blade, but its performance justifies the cost.

The Cold Steel Large Voyager is one of those knives that does everything pretty well, which is why it’s our pick for best multipurpose skinning knife. The textured nylon handle has plenty of grip, and finger detents ensure that it won’t come out of your grasp no matter how slippery the job. The blade is thick enough to perform the stoutest tasks, and the fine drop-point allows for plenty of finesse. The model is available with various blade styles, but for all-around utility, the plain drop-point is a great choice.

As the best budget skinning knife, this isn’t a classic skinning knife. But the 4-inch clip-point blade is such a great all-around blade housed in a bombproof plastic sheath that it deserves mention. Plus, it did a great job skinning my caribou. Double-plus, at less than $35, it’s cheap enough that you can have one in every vehicle and hunting pack. For that price, accept that it doesn’t have great steel, but that’s its only shortcoming.

Q: What should I look for in a skinning knife?

The main attribute to look for in a skinning knife is a drop-point blade, or one that drops to the tip, whether in a folding or fixed-blade design. Drop-point knives tend to have thicker tips for better control, and are less prone to piercing the hide. Second, make sure the handle fits your hand, and is neither too unwieldy and large nor too tediously small. Within those constraints, there are hundreds of models from which to choose.

Q: What kind of a knife do I need for deer hunting?

The snarky answer is the knife you need for deer hunting is the one you have with you! But the better answer is one that can handle the two main tasks of deer hunting: field dressing the carcass after a successful hunt, and then skinning the carcass after it cools. For both of those tasks, a drop-point design will allow you to slice without puncturing the entrails. It should also be sharp enough to both start and finish the job without having to be sharpened in the middle of the task.

Q: What is the best hunting knife in the world?

Naming the best hunting knife in the world is difficult given that there are tens of thousands of knife models. But some prominent manufacturers have plenty of first-rate hunting knives to choose from. I like the various Morakniv knife models from Scandinavia. The Benchmade Knives Steep Country sheath knife is first-rate as an all-around skinner. I relied on my Serac sheath knife from Argali during a recent Alaska caribou hunt. Spyderco knives often have innovative blade and handle materials, and it’s hard to beat either Buck  knives or Gerber knives for hard-wearing blades that don’t cost a month’s salary. I’ve carried a Ka-Bar lock-back folder as an everyday carry knife for years, and it’s taken apart many deer, elk, antelope, and bear, along with rabbits, grouse, and squirrels. And it’s still sharp enough to pluck out cactus spines from my knees after a hard prairie antelope hunt.

A Final Word on Skinning Knives

The best skinning knives will not only deftly remove the hide from a big-game or small-game animal, but they’ll handle most camp chores, from gutting your kill and butchering meat to cutting steak at the end of the day. Whether it’s a folding knife or the best sheath knife, these models have strong, sharp blades that are easily resharpened, and are made of durable, comfortable, and grippy materials. The best skinning knives are easy to clean, don’t stain or rust, and transition to becoming your favorite survival and camping knives when the hunting is done.