Waterfowl Hunting Tips: How to Get Birds to Commit

Putting out a set of decoys and getting the attention of far-off ducks and geese isn’t hard. Any arrangement of... 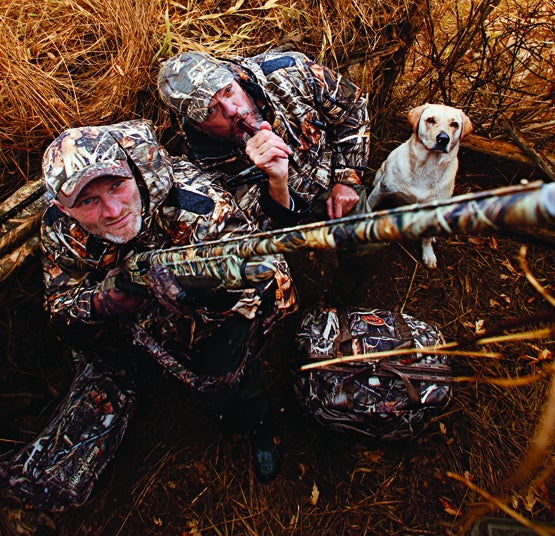 Putting out a set of decoys and getting the attention of far-off ducks and geese isn’t hard. Any arrangement of painted plastic blocks and a halfway reasonable honk or quack will do the trick. Finishing those birds, however, is another story. Under close scrutiny, proper calling technique is essential.

“When a flock is working your spread, pick out a single bird that you can see is reacting to your calling and call just to him. Keep him interested and coming,” says guide Mario Friendly of Sherwood, Oregon. “But don’t call too loudly as they approach. Add more feeding chuckles and contented calls.”

Friendly believes that all of the callers in a hunting party should follow the lead of a single person. “There has to be one guy in charge, and everyone else has to get behind him. If he’s calling softly, everyone else should be calling softly,” he says, noting that multiple callers will add realism to your set. “One guy can sound like a lot of ducks, but two guys can sound like a lot more.”

But bear in mind the number of decoys in your spread. “You have to keep the ratio realistic. If you have a dozen decoys out there, you shouldn’t sound like a bigger bunch of birds,” Friendly says. When ducks begin to “check up,” as he puts it–when they drop their butts and begin to back-flap over your spread so that they can check things out–you’re in good shape. Just stay with the soft stuff that brought you to that point.

Know the Distance
▶ To bring birds in for a close kill, leave an opening in your decoys for them to land in, and know the distance of both the near and far edges of that gap. “I try to get birds as close to me as possible. If we’re in a boat and can get them to 10 yards, then that’s where I’m putting the kill hole,” says Friendly. “If you put one decoy out at a known distance–say, a spinner at 25 feet–then you don’t have to second-guess yourself, and it takes the pressure off calling the shot.”

Marking distance will tell you when birds are in range, but what the birds are doing can be just as important. Watch their body language for clues as to when exactly to shoulder your guns. “When their feet come down and they’re just starting to land, that’s the ideal time to call the shot. Once you shoot, they still have to reverse their bodies. That’s when you can get second and third shots into them,” says Mike Franklin of Pacific Wings Waterfowl Adventures in Richland, Washington.

Give Them Space
▶ Where you set up can affect birds’ willingness to commit and finish. Tall grass and other cover around field edges are popular ambush points, but mature birds–geese especially–have seen their share of kill holes near heavy cover. “If geese are circling but not committing when you’re hunting the edge of a field, put your decoys out farther, away from the edge,” says Franklin. “The birds don’t like going over the edges because they know they get shot at there. But by putting decoys out farther, the birds will circle between the edge and your spread, which will bring them closer. Call the shot on the pass.”