Minimalist Waterfowler: How to Take More Ducks and Geese With Less Gear

Photo by Bill Buckley A certain worry fills the hearts of duck hunters’ wives when their husbands go forth. But... 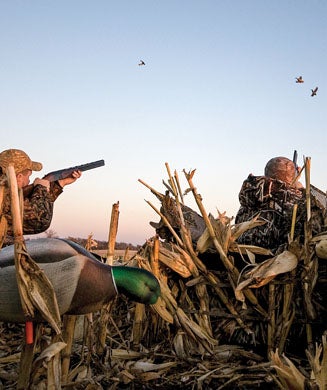 A certain worry fills the hearts of duck hunters’ wives when their husbands go forth. But last season, my wife’s anxiety was unrelated to waterfowling’s typical hazards. Rather, she was concerned about all the time I (on the wrong side of 30) was spending with my “new college friends,” as they came to be known. It began when Penn State senior Tyler Coleman looked me up on Facebook and invited me to go hunting. “Why not?” I asked myself. Such a cavalier attitude has landed me in trouble in the past, but this time it played out beautifully.

I spent my first morning with Coleman and his buddies hunting over a dozen wood duck decoys in a little pond sheltered by oak trees. By 9 a.m., the boys were in class, I was at my desk, and a brace of drakes were cooling in my freezer.

My college friends’ approach is simple: Find the birds, deploy a small spread of blocks, and hide in natural cover. What a wonderful contrast to towing trailers of decoys and spending more time building the spread than actually hunting! They do this largely out of necessity, as it’s inexpensive and doesn’t require acres of storage space. But it’s also a downright fun way to hunt. It takes 10 minutes to set the dekes and hide in the brush. If you shoot only a duck or two, you’re not kicking yourself for expending a lot of energy.

If this sounds appealing, give these minimalist spreads a try this season.

1. Pond Simplicity
The most challenging thing about this setup is finding a pothole or pond that’s holding birds on a consistent basis. But once you have, all you need are a few decoys to coax the ducks toward the guns. Tyler Coleman positions eight decoys upwind of his hide and four downwind, leaving a landing zone in the middle.

In the late season, he may put a paired drake and hen in the center. Sound simple? It is, but it works. Just don’t expect to pull ducks in from afar. This setup requires you to get out there and scout.

2. Backwater Divers
If diver hunting with small boats and minimal decoys were easy, everyone would do it. But it’s not too difficult if you follow these tips.

Find bluebills feeding on a sandbar or point jutting out into a lake or river and you’re in business. This is no time for long-line sets, though; individual rigs will look realistic in a small diver spread and can be widely spaced to feign a larger raft.

“The decoy species I use while hunting depends on what ducks I see while I’m scouting,” says Capt. Bob Wetherald of Mid River Guide Service in Newburg, Md., between the Potomac and Wicomico rivers. “I like to add paired birds to the edges and tail of the spread late in the year. By mid-January, curious drakes come to them like rutting bucks to an estrous doe.”

Always set up the spread with the “nose” facing into the current for maximum realism. If there is no current, direct the decoys into the wind. Luck is really on your side when wind and current direction align.

3. Get ‘Em With Geese
Sometimes the best duck decoy is a goose. Goose decoys are big, and the contrast of their black-on-white coloring makes them highly visible. Best of all, hungry ducks actively search for geese, aware that where there are geese, there is food.

Rusty Burnham of Avery Outdoors recommends this goose spread to target field ducks. “I use about six active decoys–two sentries and the rest are feeders,” says Burnham. “Just don’t put any geese where you want the ducks to land.”

4. Creek Mallards
Public-land creeks and small rivers offer underrated, in-your-face action. Spend an afternoon canvassing the creek until you find birds, then return the next morning with this spread in mind. Ideally, the wind will be at your back, but the current is a more important consideration.

I like to put seven or eight decoys downstream and the rest upstream–birds tend to light in the landing zone, intent on floating to the larger group. Position one or two decoys in a swirling riffle to bring the spread to life.

1. The Finesse Approach
You may find that smaller groups of Canadas are easier targets than huge flocks. They take flight expecting to join other small groups, and they present fewer prying eyes in the air.

“The early season is a good time to find small groups, but we look for them all season,” says Coleman. “We position the decoys in a loose U pattern, to duplicate whatever we see the real geese doing. I like them closer to the blinds than some people would recommend with a small spread, but this keeps our shots cleaner. We’ll hide in natural cover or dig in layout blinds.”

2. Go Small for Snows
Just a couple of generations ago, snow geese were routinely shot over small spreads. But as the population has boomed, so, too, have the decoy sets used to mimic flocks of hundreds or even thousands of birds.

“To draw flocks of that size to a dozen decoys is admittedly tough,” says Avery’s Burnham. “Especially since there will probably be other guys nearby with big spreads. That’s not to say it can’t be done, though.”

Burnham advises using the most realistic full-body snows you can afford and spreading them a few yards wider than your instincts suggest. Avoid blue-phase snows, as your goal is maximum visibility. Finding the X–the specific spot where they want to land–is paramount.

Burnham suggests locating a small farm pond that snows are visiting. You can zero in on their intended landing zone there easier than in a large grain field. Plus, water provides an added incentive to draw the birds back time and again.

“The majority of the spread extends upwind and out into the river, making the decoys visible to passing birds,” he says. “The end of the spread will be out of gun range, but approaching geese will have to swing downwind toward the blind.” On calm days, move the dekes closer to the bank and spread them loosely for a relaxed appearance.

4. Late-Season Honkers
Once winter sets in, geese get nervous and desperate to find food. “They’re in survival mode,” says Burnham. “They’ll feed, then tuck their heads and rest without leaving the food source.” In the late season, Burnham recommends using eight oversize sleeper shells, plus three full-bodies and one hisser-feeder.

Position the sleepers with their breasts facing the sun to mimic real geese. “With so few decoys, you can’t spare any to break up the blinds,” he says. “So a crosswind is ideal to keep the birds’ eyes off the hunters.

Waterfowling has a reputation as a cost-prohibitive venture, but that needn’t be the case. Along with downsizing your decoy spread, here are some tricks to keep the pressure on the ducks and off your wallet.

Downsize your Shells
The first steel shotshells were ballistically awful, so 3 ½-inch shells became popular–perhaps even necessary–to cleanly kill ducks. But that was nearly 25 years ago. These days, given the quality of ammo, you can switch to 3-inch magnum loads and save $3 to $10 per box. The mallards won’t know the difference.

Paint Your Own Divers
I’ve found that certain diver species lack the discerning eye of a mallard. So why pay for ultra-realistic decoys when you can fashion your own? Five years ago, a couple of coworkers bought two dozen yard-sale mallards, sanded them down, then primed and spray-painted them with a matte clear coat to make them look (enough) like bluebills. We shot a lot of ducks over those decoys.

Go Canoeing
If you want to reach the shallow backwaters where greenheads lurk, you can spend a few grand on a flat-bottom boat with a mud motor and a trailer to haul it–or you can get a canoe. They’re lightweight, offer plenty of space for two hunters and a dozen decoys, and traverse waters too shallow for the smallest of johnboats.

Get Dood Decoys Cheap
These days there’s no excuse for using unrealistic decoys, regardless of your budget. Entry-level dekes–like Greenhead Gear Hot Buys and Flambeau Storm Front Classics (at about $40 per dozen)–are smaller in size and outfitted with diminutive keels. Compared to what our fathers considered top-of-the-line, these budget decoys might as well be hand-carved.

Share the Investment
You buy the shells and your buddy buys breakfast. Or you split the cost of decoys. Or one buys the boat and the other buys…everything else. The point is that duck hunting is a lot more affordable if you can share costs with a friend or two. I’ve even heard of hunters going in together on a professionally trained retriever.

Natural Hides
Sometimes there’s no better blind than the grasses surrounding a marsh or the hemlocks lining a creek bank. An artificial blind could never blend so perfectly into the environment.

Wader Fix
Waders aren’t cheap, and once they tear, you’re out a couple hundred bucks. Not anymore, thanks to SG-20 ($20; sg-20.com). A bead of this dual-component sealant will have your old waders watertight in about an hour.