Waterfowl Hunting: How to Run Traffic on Ducks and Geese

The opening-day optimism was palpable as my watch struck 6:48 a.m. My buddy and I had drawn a good public-land... 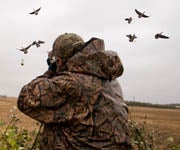 The opening-day optimism was palpable as my watch struck 6:48 a.m. My buddy and I had drawn a good public-land blind, the scouting report was solid, and it seemed like only a matter of time until we’d be enjoying mallard tenderloin.

The birds arrived right on schedule and made a beeline for us. I offered them a greeting call. Here they came. Guns were readied…and the mallards cupped to a blind 500 yards away. Three ducks smacked the water before the shotgun reports reached our ears. And so it continued. Gadwalls, teal, more mallards, and even a few pintails skirted us en route to a neighboring blind. I don’t need to kill ducks to enjoy a morning of hunting, but having to watch someone else shoot ducks? That’s just cruel.

That’s the problem in attempting to hunt the X–a term for where the birds want to be in the first place. Even if you’re just a tad off, you may spend the morning sipping coffee. Then there are those days when you can’t find the X or can’t secure permission to hunt it. For these and other reasons, few skills are as important to the waterfowler as “running traffic”–pulling birds to a location they never intended to visit. Here’s how to add it to your playbook.

Due to the behavioral tendencies of waterfowl, hunting traffic is easier if you focus on geese and select a field rather than water.

“I’ve tried pitching decoys in a pond under the flight path, but the birds always kick my butt,” says Sean Hammock, owner of Big Sean’s Championship Calls (bigseanscalls.com). “You need to pick a field, and it has to be the right field.”

Scouting efforts must be at least as diligent as when hunting the X. Your first objective is to determine the primary flight path of the geese from roost to feed. “Pick a field that allows you to position your spread directly below the natural flight path,” Hammock advises. “And pay attention to the wind, which could force them off-course. The closer you set up to the roost, the more this matters, as birds take off into the wind.”

Concealment is an equally important consideration. “Always pick a field with a good hide,” says Field Hudnall, founder of Field Proven Calls (field
provencalls.com). “I can’t stress that enough. I won’t even hunt the X if there’s nowhere to hide hunters or blinds.”

There’s a fine line between a field offering places to hide and one with too much cover, says Hammock. “The geese have to see your decoys,” he explains. “I’d rather run traffic in cut soybeans, alfalfa, green beans, or even a plain dirt pasture than in 18-inch corn stubble. Of course, my favorite is a snow-covered field. The decoys pop and the birds don’t know what type of food is under the snow.”

Both Hammock and Hudnall position their decoys on an elevated area to boost visibility. “Geese tend to land on the high spot naturally, because it allows them to survey the area for threats,” Hudnall explains. “So we find the highest spot in the field and face the majority of our decoys in the direction we expect the geese to arrive from.”

Given the need for visibility, this is also a good time to break out every goose decoy you own.

“Generally, the more decoys, the better,” Hudnall says. “If you have a limited number to work with, you can make the spread look larger by arranging small groups of four to six decoys and really spreading them out.”

The exception to the big-spread rule is when you are targeting a smaller group of geese. “If you’re after 150 geese, you’ll look goofy with a thousand decoys,” Hammock says. “You want to look like the groups you’re seeing, so the birds say, ‘Hey, the plan must have changed, because there are our buddies.'”

If you can see geese, they’re close enough to start flagging. Hammock has up to five hunters flag at once. “Then start calling, and be as loud and obnoxious as you can, even if it doesn’t sound realistic,” Hammock says. “When they’re that far away, they can’t tell whether you sound good anyway. You just need to get their attention. Tone it down when they get closer.”

When they do come, don’t be afraid to shoot. “Traffic geese aren’t always going to cup up,” Hudnall says. “If they give you a look and offer you an ethical shot, take it.”

As noted, it’s very difficult to traffic ducks, but it can be done. Hudnall and Hammock suggest using -spinning-wing decoys to gain the birds’ attention and to simulate aggressively feeding mallards. Ducks tend to hop from field to field more than geese, so you may just luck into them. Still, for far more consistent hunting, stick with geese. There’s a certain thrill to pulling traffic geese, but for most hunters it remains a Plan B for when the X is inaccessible.

It’s not easy to traffic ducks, but a spinning-wing decoy can help.

For Hammock, however, running traffic is part of a season-long strategy. “I hardly ever hunt the X,” he says. “Even if I have permission to hunt it, there are lots of reasons to hunt traffic instead. Most important, you can shoot good numbers of traffic birds, get out, and set up on them several more times. If you hunt educated birds on the X field, they may all blow out of the area after the first shoot.”